Wales edge past Scotland at home

Wales beat Scotand 18-17 in a game of two very different halves, with the hosts having dominated the first half in a game it looked they would go on and win comfortably. 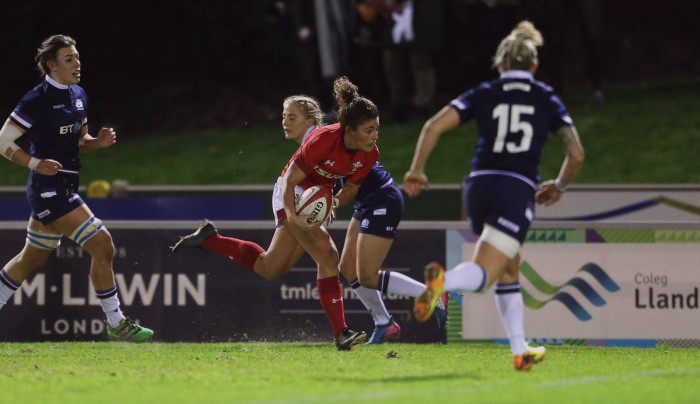 Wales were the dominant team over the first 40 minutes, from early on when Jodie Evans had a shot at goal after just a minute, right up to a try just before halftime.

With Carys Phillips leading well up front, the Welsh pack were in control at the scrum and Scotland struggled to deal with their well organising driving maul.
The hosts should have been over the try line just a few minutes in but Evans spilled the ball out wide after a brilliant driving line out up front.
The opening try, when it came after 12 minutes, was a peach. The excellent Siwan Lillicrap burst through the middle and a lovely pass from Evans to Jess Kavanagh-Williams, playing on her home pitch, saw the winger finish very well and give Wales the well deserved lead.
Scotland were at sixes and sevens and conceding rafts of penalties in their efforts to deal with the Welsh posession and the only disappointment for Wales must have been that they weren't further ahead.
Evans added a penalty which seemed to wake Scotland up as they worked their way into the Welsh 22 with flanker Hannah Smith prominent.
Wales defended numerous surges for the line and a brilliant turnover from Amy Evans just a metre out helped clear the danger for the hosts. Just before half time Hannah Bluck showed her finishing skills when she powered over to make it 13-0.
Scotland raced out of the blocks in the second half and Chloe Rollie raced over for an early try, with the fullback showing her attacking threat, slicing between two defenders to touch down.
Order was restored when the Welsh pack took control again and helped Cerin Lake to score, with the centre adding to an already excellent defensive game.
Shade Munro rang the changes at that point with the move of Smith to midfield proving a catalyst for another score for Rollie, who got on the end of some quick hands to race over to dot down.
Scotland then pummelled the Welsh try line and though Wales repealed some of the early charges, a score was bound to come from the pressure and it was Jade Konkel who dived over at the foot of a ruck to make it a one point game.
Wales needed cool heads and to their credit they played calmly in working the ball up the field, with Carys Phillips a key cog setting up and organising their excellent driving lineout.
Wales had a chance to seal the match but a poor decision from Kavanagh-Williams saw the chance go begging, but the hosts had done enough and secured the one point win.

With a number of key players returning from sevens duty in the coming days, Wales will get stronger throughout the competition while there is much for Scotland to take from this game, though they have much tougher challenges in the coming weeks.