Wales end year on a high 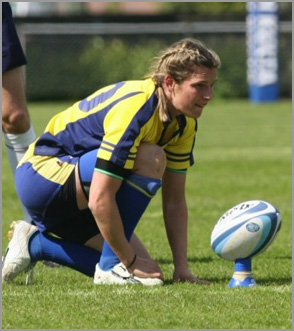 Wales have ended their excellent year on a real high with a 56-7 victory over Sweden in Swansea. Non Evans scored 21 points in the nine-try win to help this years Triple Crown winners on their way to a comfortable afternoon.

Having beaten England for the first time ever this year Wales travelled to the St Helens ground determined that their year would end on a sound note ahead of the start of their 6 Nations preparations in the coming months.

Evans was a real threat throughout the day as the fullback touched down two tries and was a constant threat on attack.

Caryl James also crossed for two tries on her debut while Awen Thomas completed the rout with a late brace to ensure that the win was more than convincing.

Wales led 27-7 at the break courtesy of four first half tries and were always in control against stubborn opposition who defended hard but couldnt stem the Welsh attack.

The scoring had started when Evans kicked an early penalty and then Sweden then ventured into Welsh territory briefly before Mel Berry's side struck in the 10th minute with a well taken try by second row Gemma Hallett.

Sweden though showed some early promise and got back into the game from a lineout close to the Welsh try-line. Skipper Ulrika Anderson Hall (pictured) spotted a gap and sped over, under the posts. Her conversion reduced Wales's lead to three points.

Wales repelled further assaults from the Swedes to further extend their lead in the 24th minute. The ball was worked to winger Caryl James who scorched down the touchline, bouncing off would-be tacklers to dive over for her first try at international level in her Test bow.

Wales then produced a purple patch just before the break to assert their authority. First Evans was on the shoulder of fly half Elinor Snowsill who made the initial thrust. Evans still had some work to do but she bumped off several tacklers to go clear.

Three minutes later Louise Rickard then finished off strongly in the opposite corner as Wales whipped the ball swiftly through the backline. Evans's touchline conversion gave Wales a comfortable 27-7 lead at halftime.

A combination of stubborn Swedish defence and the inability to be capitalise on the lion's share of possession ensured the second half took some time to take off for Wales but three tries in quick succession put the issue beyond doubt.

Replacement winger Aimee Young powered her way over out wide after prop Catrin Edwards took a quick tap to unnerve the Swedish defence. The ball was spun through the backs where Young used her strength to surge over.

Young was to the fore again, cutting through the defence like a hot knife through butter. She beat three defenders before unselfishly off-loading to Evans who strolled over for her second try.

Replacement flyhalf Awen Thomas then darted over from close range and with Evans adding the conversion, Wales were leading 46-7. Thomas hammered home the final nail into the Swedish coffin when she crashed over in the last act of the game.

The result will be tough to take for Sweden who will be hoping to be competitive at the Womens Rugby World Cup next year but it was not at full strength given that many of the Swedish players are based overseas and cannot travel for every game.