A year after finishing the 6 Nations in second place and winning a Triple Crown, Wales have ended this year's competition in bottom place after a shock loss to Italy. 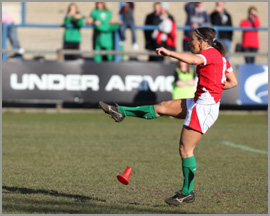 The Italians won the game 19-15 and the result ends a very tough year for Wales who had just one victory against Scotland to take out of the competition.

The victoy means Italy finish above Wales in the table after they took two points from this match and a point from the draw with Scotland.

Most disappointingly for Wales is that they were well in control of this match at halftime, leading 12-0 with Naomi Thomas racing 50m to score from an interception while Non Evans (pictured) danced over from close range to put Mel Berrys side in command.

But the Italians hit back in the second spell and stung Wales with three tries as the home side hit the self-destruct button with basic handling errors and poor execution seeing a number of promising attacks come to nothing.

Italy scored in the fourth minute after the break through powerful second row Flavia Severin who forced her way over in the corner.

Wales regrouped briefly but the game was turned on its head in the 56th minute when Severin powered over from close range for her second try. Fly half Michela Tondinelli slotted the conversion to pull Italy level.

Two minutes later things looked even better for the Italians when Wales full back Mared Evans let a high kick from scrum half Valentina Schiavon bounce and speeding winger Maria Diletta Veronese collected the bounce to storm over from 30m.

Wales rallied with prop Catrin Edwards prominent in the loose with several charges while Berry did her best to rally her troops but retaining the ball became a major area of concern and Italy were more than happy to peg Wales back deep into their own territory with raking kicks from Tondinelli.

An Awen Thomas penalty in the 67th minute pegged back three points to bring Wales within one try of Italy but try as they might, they couldnt get the vital breakthrough.

A frustrated Wales coach Jason Lewis said: In the first half it was all us. We had all the territory, all the possession and should have been 20 points to the good to be honest, he said.

But in the second half weve pressed the self destruct button for the third time in a row, we gave them the game, they didnt win it. We went from a scrum in their 22 to a try under our own posts. We seem to be hell bent on giving the game away.

We need to take a long hard look at ourselves. The bottom line is a few players put their hands up today but a few didnt. Weve got to pick ourselves up and dust ourselves down before the World Cup. We played some good rugby today but we have just got to cut out the errors and learn not to implode.