Wales mix it up for Sweden clash

Wales coach Jason Lewis has named four uncapped players in his match day squad to take on Sweden this weekend. 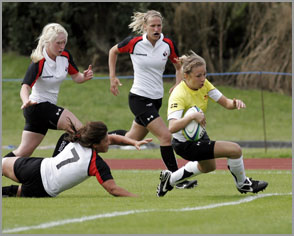 The World Cup may not be until August 2010, but the Welsh coach is already thinking of the bigger picture by giving hooker Becky Newton, fly-half Elinor Snowsill (pictured) and winger Caryl James their international bows while another newcomer, backrower Lisa Newton, starts from the bench.

Wales take on Sweden, who will also play at the World Cup, Swansea RFC, St Helen's this Saturday.

The Welsh side who this year defeated England for the first time in their history, will have to prepare for some tough World Cup matches in the season ahead as they were pooled with New Zealand, South Africa and Australia for the tournament,

Lewis is remaining upbeat despite being drawn in the same group as defending champions New Zealand who have never lost an international to any of the sides in the pool so will be firm favourites to qualify automatically from the group.

Lewis saw first hand earlier this week just how good the Kiwis are when he travelled to see them beat England A 48-3 at Esher in a prelude to their second Test against England on Saturday which they then lost.

New Zealand deserve to be seeded one, he said referring to the World Cup. There isnt any question about that as theyve set the benchmark for a number of years.

Its a tough group but my point of view is that you would expect every group to be tough in a World Cup. But as a group, if we have any ambitions of making it all the way to the final, then you have to play against the best, and beat them, to get there.

"We very rarely play against teams like New Zealand, South Africa or Australia so that is a huge bonus for us. We are under no illusions as to what lies ahead but the girls have accepted the challenge and are willing to tackle it head on.

Everyone is talking about New Zealand and England, but they arent the only teams in the competition. France were good in the last World Cup, Canada and the US are tough, Australia won in Dubai, and South Africa are growing. Wales are looking to build on the success of last season, but do have a tough pool. Its going to be a tough tournament to win. It certainly isnt a foregone conclusion though.