Wales beat Ireland 22-14 in Dublin at the weekend, a second win a week for Rowland’s Phillip’s side in their final warmup game ahead of the 6 Nations. 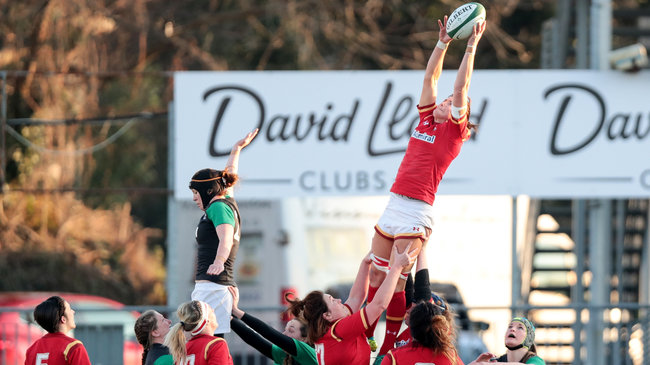 Ireland led at halftime but a strong second half performance saw Wales win the uncapped training match by eight points.

Wales had the benefit of a recent win over Spain and although both sides used the opportunity to field new faces and combinations, it leaves them in a positive place going into the Championship.

Ireland had seven uncapped players in their squad today with Railway Union scrum half Ailsa Hughes and UL Bohemians winger Deirbhile Nic a Bhaird both starting but they still had good experience within the team and Connacht full-back Mairead Coyne was almost put through by centre Claire McLaughlin from the opening attack.

Wales managed to squeeze Ireland out on this occasion, but 11 minutes in, Ireland managed to break the deadlock. A superb break from flanker Claire Molloy moved the hosts into the Welsh 22, Coyne was stopped short of the line and then play was transferred back into a central position from where Nora Stapleton crossed in confident fashion. The out-half converted for a 7-0 lead.

To their credit, Wales showed a strong attacking intent of their own and only for a knock-on by winger Adi Taviner, they may well have crossed the whitewash in the 19th-minute.

The Welsh side did have a series of lineouts at the start of the second quarter, but having held firm, Ireland subsequently doubled their lead. Molloy was making a massive impact on the play, and from her third lung-bursting run of the half, the talented Galway woman raced through for an outstanding converted score.

The early signs were encouraging from an Irish perspective, but as the first half developed, Wales forced their way back into scoring range. They created a powerful maul just beyond the half hour mark, and back rower Shona Powell-Hughes was in the right place to dot down over the line.

A successful conversion followed from Elinor Snowsil, and Ireland suffered another setback, six minutes before half-time, with a sin-binning for Munster's Elaine Anthony. In her absence, Taviner dived over from a Snowsil offload, but because of the latter's wayward conversion, Ireland still led 14-12 at the turnaround.

Ireland had lost Molloy to injury but with a number of changes made during the break -including a long-awaited return to 15s international rugby for Jenny Murphy-, there was a relatively fresh look to the home side when play resumed.

Wales, on the other hand, were keeping their alterations to a minimum, and they were on top of possession for much of the third quarter. The hosts remained tight and compact in defence, but following strong work by an impressive Welsh pack on 58 minutes, Sionad Harries (one of five Scarlets players in the Welsh starting line-up) grounded the ball beyond the Irish try-line.

Another two-point salvo by Newport Gwent Dragons kicker Snowsil ensured that the visitors were five points to the good. Like Ireland, Wales utilised their reserve options as the second half wore on, and with just 13 minutes remaining, only a knock forward prevented replacement Jodie Evans from scoring a try.

This was something of a let-off for Ireland, but when their Welsh were awarded a close range penalty in the 74th-minute, the reliable Snowsil made no mistake from the kicking tee to clinching a 22-14 comeback victory for her side.