Wales won a tight game against Scotland with an 80th minute converted try. 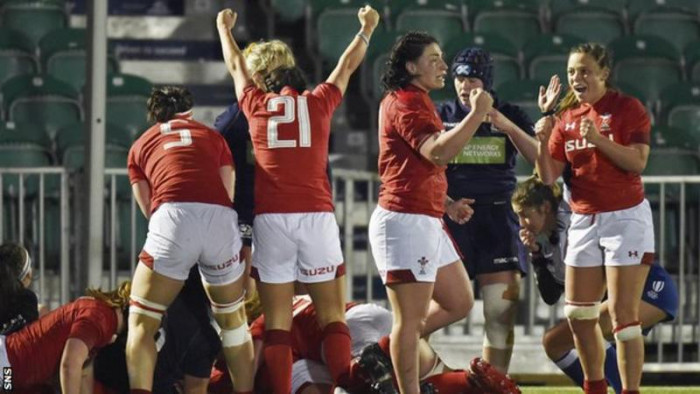 A wind and ran swept Scotstoun hosted two well matched teams in a game where the result was in doubt to the end.

Scotland dominated in the opening minutes of the game, retaining possession and working their way into the Welsh 22 and down to the Welsh line where after 8 minutes Jade Konkel grabbed the first chance to score.

Wales four minutes later pulled three points back with a Robyn Wilkins penalty before on 16 minutes Bethan Lewis burrowed over the line just minutes later, with Wilkins adding the conversion.

But within three minutes Scotland were level after Sarah Bonar found space rolling off the back of a maul to tie the score at 10-10 after the first quarter.

Wales dominated the rest of the half, and the start of the second, but the blue wall could not be breached. Siwan Lillicrap appeared to have scored just before the break, but the video referee spotted a knock-on, keeping the score level at halftime.

As the game entered the final ten minutes, Scotland gradually took the offensive before after 73 minutes Chloe Rollie finished off a slick backline move.

The conversion was narrowly missed, however, leaving the result still open. A penalty shortly after the restart put Wales down to the Scots line. Three minutes of desperate Scottish defence could not turnover the Welsh and eventually Lillicrap found room to score and bring the teams level at 15-15.

With time up Lleucu George was faced with a tricky kick into the wind and rain, but she nailed perfectly to win the game for Wales 17-15