Wales Development took the game to a determined UK Armed Forces side this evening at the Cardiff Arms Park, prevailing 39-22 in this special Remembrance Rugby fixture. 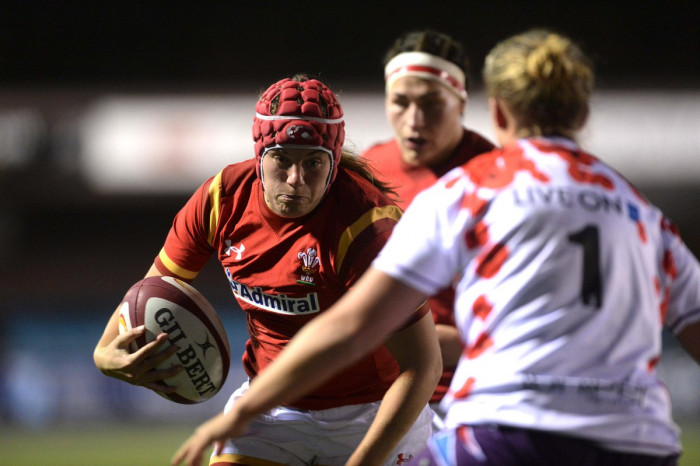 Welsh coach Rowland Phillips had selected an exciting and experimental line-up for the fixture, including naming his World Cup flanker Lleucu George at fly-half.  "After the World Cup, we discussed individual players and it was felt that, with Lleucu's skillset, we could develop her into a fly-half," explained Phillips before the game.

Twenty of the players recently named in Wales' 2017/18 training squad are under 21 years of age - many between 17 and 18, and several of the new players were in the squad, including openside Bethan Lewis - who impressed as captain of the U18 Sevens team in the summer – plus lock Natalia John, wing Hannah Bluck and centre Alecs Donovan.

"They're coming into an environment where they just want to learn, and our responsibility as coaches is to maximise their learning and potential," Phillips said.

The UKAF team was made up of the best players from the three services (Royal Navy, Army, and Royal Air Force), and captained by Wales’s own Sian Williams. Also in the team were Welsh teammates Gemma Rowland and Charlie Murray, plus England’s Amy Cokayne.

UKAF Team Manager Lieutenant (RN) Jane West had the challenge of bringing together the team and spoke of her admiration for how quickly the players bonded. "In many ways, it's just like watching the way we come together in training onboard ship and all our operations," she said. "Individuals trained to the highest standards in their own disciplines, from diverse backgrounds, bonding quickly to become more than the sum of their parts.

"It makes me proud to see our women showcasing the talent our Armed Forces have to offer, and the centrality of women's role in everything we do. On the pitch will be not only seven international rugby players with some ninety-plus caps between them, but some of the best aircrew, gunners, engineers and personnel of many other trades that the Armed Forces produces - all united in Remembrance and rugby."

The fixture also marked the 100th year since the first recorded women's rugby match. On 16th December 1917, a women's rugby team from the munitions factories came together for a game at the Arms Park to raise money in support of those who served. This was shortly after some 247,000 Allied casualties had fallen at the battle of Passchendaele.

When it came to the game, the UKAF were evidently fired up in the opening exchanges (perhaps with memories from last year's encounter still fresh in the mind), and attacked with gusto, with an equally zealous defence to boot.

That feistiness in the close quarters was found lacking out wide in the eighth minute, however, when North Walian speedster Jess Kavangh-Williams showed a clean pair of heels on halfway and sprinted all the way in for a try. Alecs Donovan, the newcomer in the Welsh jersey, also looked lively in the early midfield exchanges, whilst flanker-turned-fly-half Lleucu George was a creative as well as powerful presence with the ball in hand.

As the half-hour approached, patient work from the Welsh forwards paid dividends as they fashioned a score out wide through captain Carys Phillips for a 10-point lead. It was then the turn of George, using all her considerable strength to fend off the UKAF defence and score from 5m out. Her successful conversion of her own try out wide was a striking effort.

UKAF weren't to be humbled, and they struck back with aplomb through the evasiveness and sheer pace of centre Jade Mullen for a try which was converted by Wales' very own Gemma Rowland just before the half-time break.

Two minutes into the second half, and Wales Women had got themselves into a good position deep inside UKAF territory, from where their driving maul allowed Phillips to touch down for her second try of the night.

The Welsh coaches made a raft of replacements in the 50th minute, which had the desired effect of re-energising an already high-tempo attack. Indeed, after five minutes of their introduction, they had once again breached the UKAF line - again by the indefatigable Phillips, who deservedly claimed her hat-trick.

The Armed Forces then showed that they too had try-scoring front rowers in their ranks, as loosehead Sarah Batley crashed over for her team's second try with quarter of an hour left to play to make it 17-22.

Replacement back Rhi Nokes made a stirring impact late on as she broke away from the clutches of the UKAF defence to sprint away for a try, converted by Robyn Wilkins.

The last word was almost left to Kavanagh-Williams, who really put her stamp on the game with another scintillating try down the left wing with four minutes to go.

Then, with time already up on the clock, UKAF hit back with a mighty score from England hooker Amy Cokayne in what was a fitting end to a fiercely-fought contest between the two sides.