Having already had a taste of World Cup success at 7s level, Australia’s Wallaroos are hoping to bring home the big one from London next year. 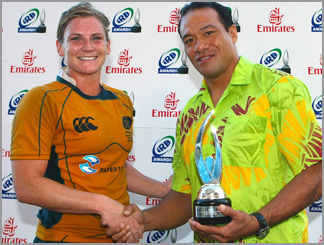 Becoming the 7s world champions in Dubai earlier this year has instilled confidence throughout the squad and Debby Hodgkinson, this years IRB Womens Worlof the Year, believes her side can lift the Womens Rugby World Cup in 2010.

Speaking on the IRBs Total Rugby show, Hodgkinson said: I think since we won the Sevens all the other countries are definitely going to be looking out for us.

Australia secured qualification with an emphatic 87-0 defeat of Samoa in Apia over the summer and the victory has left a burning desire for more silverware.

The Wallaroos finished seventh in the 2005 Womens Ruby World Cup in Canada, but Hodgkinson epitomises the growing confidence in her country when she talks of ending New Zealands 12-year reign as world champions.

This confidence can be traced back to last year when Hodgkinson and a blend of experienced rugby players and touch stars came together to form the first ever Australian Women's Sevens team under coach Shawn Mackay.

Mackay, the former Australian Sevens captain who passed away in April, fostered a team spirit and belief that nobody was unbeatable, something the Wallaroos proved by beating New Zealand not once but twice in the Oceania qualifiers for RWC Sevens 2009 - the first time Australia had ever beaten the Black Ferns.

They repeated the feat again in the RWC Sevens final to take their place in the history books and Hodgkinson, buoyed by the smallest ever margin of defeat - six points last November, believes the Wallaroos can finally beat the all conquering Blacks Ferns in the 15-a-side arena.

I think when the Sevens started last year, Shawn Mackay was our coach and he created a team environment where everyone was encouraged to have fun, but he also made us believe we could do it, Hodgkinson told Total Rugby Radio.

I think it was the first time ever in the Wallaroos and the Australian Womens team that we thought we could be the best and that has definitely carried on since he left. Not only are we now winning but we are also having fun at the same time.

Australias success in Sevens and the manner of their emphatic qualification for Womens Rugby World Cup 2010 which begins its one year countdown on Thursday means that the Wallaroos will now be on everybodys radar and no longer a surprise package.

The game plan we have been given with our new coach (John Manenti) is so clinical that I think a lot of the other nations are going to struggle to defend how we are going to play.

I think now, especially with the Sevens, we have set a standard for ourselves and we want to win the fifteens and the Sevens and make a difference.

I dont think I would get up at six oclock every morning and train till like 8pm every night if I didnt think we could do it [win the World Cup] collectively as a group.

All the countries are inching closer together now, before it used to be England and New Zealand who were just the outstanding countries, but now

Last year we nearly beat New Zealand. We lost by I think it was six points and that is the closest we have ever come, so it is definitely within our reach and hopefully we will time it so we peak at exactly the right time in London next year.