Ward: No complacency in England camp

England's Abbie Ward looks ahead to this weekend’s game against France. 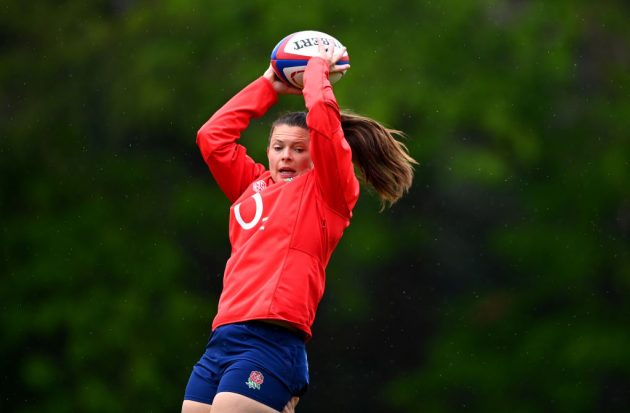 England’s famed strength in depth is such that double-digit changes to match day squads week-on-week are common.

Ward though has started all of England’s game so far in this year’s Six Nations and has been one of their best players. She recognises better than anyone that the competition to keep the shirt is fierce.

“I am trying to be better every game because I want to be selected. If you look at our back five of the scrum there are so many people and so many combinations. So yeah, I am happy with how I am playing right now but I am always looking for more.”

“We have huge talent in our squad and then it’s great to have people like Zoe Aldcroft back as well. For me if I am running the lineout and someone like that is there, you can have such confidence going to them and it frees you up to focus on your own game. We have so many world class players that it is easy to look pretty average amongst them all and still be playing pretty well.”

Though England have effectively thrashed every team that they have played, Ward believes the games have been tougher than they’ve looked.

“Sometimes the score doesn’t have the full reflection of how hard we’ve had to work in those games for those points. You think right back to the very first game against Scotland, I think people who watched would have said they were in the fight for a lot of that game. Wales came at us hard too.

“We are our harshest critics, and we are constantly want to be better and we are always picking apart our games. There is no such thing as a perfect game, and I think we have been nowhere near that.

“We’ve had unforced errors, and we haven’t had the fluidity we would like. Ireland in the first half as well – they defended very well and broke our game down.”

Winning by such handsome margins, she adds doesn’t mean the team cannot come away from the games able to properly analyse how they are really developing.

“It is less about the points for me and more about what we do out there. If you play as well in a game that you’ve won 69-0 as one that you’ve won 6-3 then for me it’s just about that process. It might make you 80 minutes or 8 minutes to score a try buy every week we want to elevate our performance and if we can do that, we will be happy.”

England’s maul was impressive last weekend against Ireland, and with France having traditionally used the driving lineout as a weapon, are we likely to see more of that this weekend?

“The best bit about our game as a squad is we have different ways we can go. We’ve developed our whole game. Previously we relied on a maul for example but now we’ve really developed our kicking game. If we want to maul, we can maul, but we also have an electric backline.

“France will front up; we know that, and this will be a tough game. They’re building momentum and like us they have a great pack that has shown dominance, so I think it’s making sure we don’t get into an arm wrestle unnecessarily but then at the same time if we want to go there, I will back our pack and we have that physicality, and our forwards are always keen to show that.”

Like most players who have played in France, especially in the south, Ward speaks highly of the experience.

“I love playing France and France away is always amazing. They love the game so much here and it’s a sellout and you know that when you come here it’s packed with fans just waiting to jeer you, put you off and so on but it’s a brilliant atmosphere and I thrive on that, I love it. It’s the occasion you remember.

She is wary too of what France can bring.

“They’ve got threats all around the park. Laure Sansus is a weapon for them in how she brings energy and pulls the strings. Their pack has a hell of a lot of physicality too. Their backrow has a lot of athleticism, so I think it’s going to be a great match.”

She argues that while England have been winning well, this year’s championship is still competitive.

“Although you might say that it isn’t competitive, if you look at the games between the likes of Scotland and Wales, Ireland and Italy, every week there are games that are close and it’s exciting. From our perspective we just want to be pushing other nations to increase their support and their set up. It’s been great to see contracts coming to Italy and hopefully more can follow suit.”

As for this year’s interest off the field, she is effusive about how it feels to be part of it.

“This year has taken another step up. It feels special to be part of. When you’re at the games to see people outside selling scarves, and just the sheer numbers, it’s incredible. I think it’s been great having that headline sponsor and seeing what TikTok are doing has elevated it again and playing at this time of year helps. On Sunday to see the sunshine and people having a pint in the ground – those are great days to be at.”

So how do England avoid complacency going into the final game after such a strong tournament?

“There is no complacency. You’re fighting for a shirt so you can’t be like that and if you are someone else will get your spot. So, it’s fiercely competitive in a great way.  Complacency will kill you and we know that.”