Auclkand top the North Pool in the Farah Palmer Cup as the second weekend of competition saw the southern teams take the field for the first time. 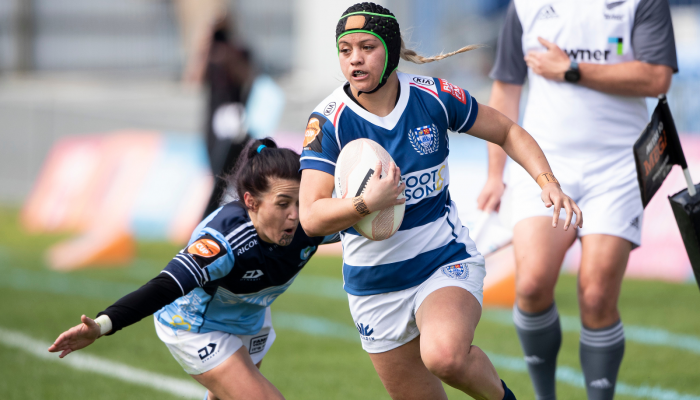 This second weekend for the North Pool opened on Friday evening at North Harbour where the home team – thumped 89-3 at Counties Manukau on week one, did little better against Bay of Plenty, who were playing their first game of the series with Kelly Brazier making her debut for the “Volcanix”.

Brazier was not the only debutant for Bay of Plenty and most of them got on the scoresheet, including Alena Saili (inside centre) and Kiani Tahere (full back) in the opening 10 minutes, and Mahina Paul (outside centre) who scored a hat-trick.

Bay of Plenty finished in the bottom half of the Premiership last season, but 67-17 win on the road suggests they could put up a stronger challenge this year.

Waikato had an unexpectedly challenging opening game against Northland in week 1, and were matched by Taranaki, captained by Gayle Broughton, for at least the first quarter in Hamilton on Saturday, where the game seemed finely balanced at 19-14 to Waikato. But Chelsea Alley’s team found another gear and roared away in the final hour. By halftime they were 38-14 up, before doubling their score in the second half to win by 76-14.

Northland surprised Waikato in week 1 and playing at home in Whangarei did even better this weekend against Auckland. With Aroha Savage, Tyla Nathan-Wong,  Victoria Subritzky-Nafatali and Portia Woodman in their starting line-up they are significantly stronger than their mid-table Championship finish last year might imply.

The live TV audience witnessed a great battle. Woodman’s running gave them an early lead from a penalty, but Auckland’s advantage up front, leading to two tries before the quarter hour. Howeve, three tries from Subritzky-Nafatali, Nathan-Wong and Savage sent the home team into the break with a 22-14 lead.

That lead lasted just four minutes in the second half, a Sylvia Brunt try and a penalty evening the scores before a turnover on 56 minutes allowed a Theresa Fitzpatrick ty to break the deadlock, putting Auckland 29-22 ahead – which ended as the final score, a frantic last 20 minutes not allowing either side to add to the score.

The South Pool got underway this weekend, with Manawatu suffering from the absence of Sarah Hirini as they went down 36-10 to champions Canterbury. Canterbury started slowly and certainly didn't have things all their own way against a spirited Cyclones side, but they eventually wore down their South Pool rivals at Central Energy Trust Arena in Palmerston North on Saturday.

Wellington also started with a victory, although their win against Tasman was much more one-sided than the Canterbury game. They blitzed Tasman 62-0 at Lansdowne Park, Blenheim.