News from Spain, Italy, Scotland and Russia - plus Asian Top 3 and Olympic repecharge 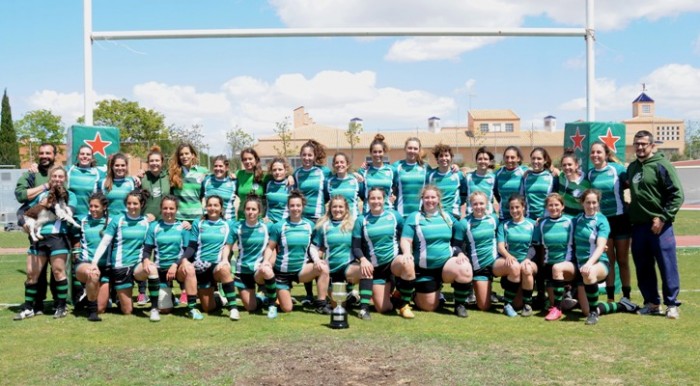 INEF Barcelona champion proclaimed national champions on Sunday, winning the División de Honor after defeating Majadahonda by 34-14. The Catalans were ahead for most of the game, hurting their Madrid-based opponents with the quality of its gameplay.

Despite a good start for Majadahonda, showing a strength up front, but INEF were the first to score with a try from Merce Viñals, after a great move across the field, after 15 minutes.

Just four minutes later, Mette Zimmat, one of the best players in the end, found the gap between broke the gain line, and then eluding four Majadahonda players, scored the second putting INEF 12-0 ahead. Then 10 minutes from the end of the first half, with INEF now dominant, Carlota Meliz scored an excellent individual try to put the Catalans 17-0 ahead at half time.

In the second half, starting with the Madrid sought to give more rhythm to their game, something they lacked in the first half, and scored their first try. After 10 minutes, Isis Velasco capitalized on a good kick Blanca Dominguez win the race and give the first points to the Majariegas.

Despite the score, INEF took their chances better and on 60m, Pedrona Serra scored a fourth try after good ball skills from the three quarters let her in for Catalans fourth try, and with 10 minutes to go Zimmat used her power and speed to finally shut out Majadahonda.

The Madrid team scored 7 points more through Velasco, but in the end, it was INEF’s German star who ended the game with a hat-trick leaving the final score 34-14 for the champions.

Italy – down to the play-offs

Six teams have qualified for the Italian Serie A playoffs.

In the northern Group 1, Rugby Monza had already qualified directly into the semi-finals (22nd and 29th May) before last weekend, after 15 wins from their 16 games, and they will be joined there by Benevento, who won Group 2 after beating rivals Bologna 26-18.

The final two places will be decided next weekend. Bologna, whose defeat left them in second place in Group 2, will meet Benetton Treviso. Treviso just edged out Rugby Rivera on points difference, their 50-0 win against Chicken Pavia being just enough to edge out Rivera, despite their beating Rugby Cogoleto 65-0. In the end the difference was a single try over 16 matches. In the other game in the “Barrage” Valsugana – champions in 2015 - will take on Roma.

Asian Top 3 (minus 1) starts next weekend

Following the withdrawal of Kazakhstan from the tournament – and therefore the 2017 World Cup qualification process – Hong Kong and Japan will now play-off for the championship over two legs. The teams will first meet in Hong Kong on Saturday, and then on Tokyo on 28th May.

In addition, Singapore will now play Hong Kong in a friendly match on 14th May, in Singapore.

Kazakhstan are reported to have suspended both their men’s and women’s XVs programmes following government funding being redirected into the sevens programme. With Japan qualifying automatically for the 2020 Olympics as hosts, Kazakhstan would only need to finish second in Asia in 2019 to join them.

The Russian RFU has announced that the provisional suspension for meldonium for Alena Mikhaltsova (nee Bogacheva) has been lifted. She will return to squad on Wednesday.

The draw for the Olympic repecharge qualifier in Dublin, to be played on 25/26 June, will be made on 23rd May. The sixteen teams have been divided into four “pots” of seeds, with one from each pot meeting in each pool on the opening day. The “pots” are:

Scotland have announced an extended training squad of 20 players for the European Championships in June and July.

The squad, with Graham Shiel as head coach and Elaine Vassie as assistant coach, will compete in two tournaments in the Rugby Europe Women's 7s Trophy series, in the Czech Republic and Hungary. The winners and runners up over the two tournaments will qualify for the Grand Prix in 2017. Scotland are the top seeds. The initial extended squad for the first camp (30 April) is :

(Report from Scottish RFU). Although two of the three league winners have been confirmed, the BT Women’s Premier League champions still to be decided.

Murrayfield Wanderers and Hillhead/Jordanhill, the top two sides in the BT Women’s Premier League, met for the third consecutive time in the league on Sunday with Hills claiming a 26-15 victory to reverse their Sarah Beaney Cup final defeat to their nearest rivals last month.

Hills made an impressive start with Abi Evans touching down inside the opening two minutes before Lana Skeldon added the extras with the boot. Wandies responded minutes later through Rhona Lloyd following a neat interchange with Chloe Rollie down the left wing. Skeldon was involved once again in the 7th minute, intercepting the ball to run in before narrowly missing the conversion attempt with Hills starting to build their lead.

Lindsey Smith made a powerful break through the Wanderers defence from 10 metres out, with Skeldon striking the conversion in the 20th minute. Hills captain Jade Konkel broke from deep inside her own half to put Hills in a strong attacking position, the ball then made its way to Smith for her second try of the game before Skeldon secured the conversion. After the interval, Wandies began to mount pressure on the opposition’s defence and it was Rollie who used her pace to score in the left corner. Wandies captain Lisa Martin bagged her side’s third try in the same corner after the host’s pushed for a final score before the final whistle.

Ayr Ladies gained promotion to the BT Women’s Premier League on Sunday with an impressive 37-19 victory over Watsonians at home.