Well-drilled England too good for Ireland

England made it three wins from three with an effective all-round performance against Ireland on cold Saturday evening at Twickenham. 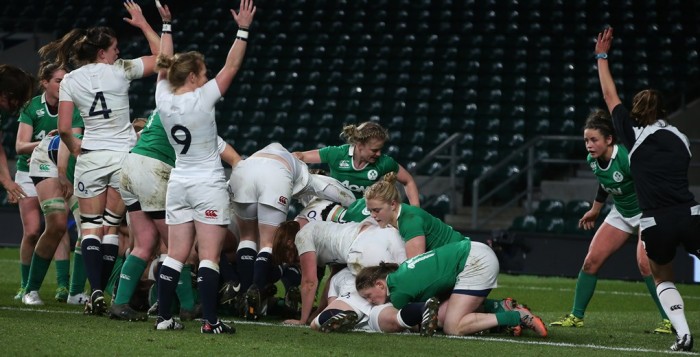 Tries in each half from Emma Croker and Abbie Scott, plus an early penalty from Amber Reed, were enough to defeat an Irish team who, though they rarely threatened the English line, were always in the game.

The teams were evenly balanced, with England having slightly the better of an, at times, nervy and tense opening half thanks to the early Reed penalty and the Croker try from a well worked maul from a lineout.

England spent much of the half at the Ireland end without adding to those scores before a single loose pass after 34 minutes let Ireland back into the game, Claire Molloy breaking away to set up a move that lead to Ireland’s first points, a penalty from Niamh Briggs. With Briggs adding second penalty minutes later England’s lead was only 8-6 at the break.

England were very effective at the set-piece throughout the game, all-but neutralising Ireland’s advantage up front. However, the ill-discipline that gave Ireland two penalties in the first half continued at the start of the second, and eight minutes after the restart the visitors went ahead with a third Briggs penalty.

This was the start of Ireland’s best passage of play, and twice they had opportunities to set up mauls close to the line. But England were ready, and the well-drilled responses quickly neutralised the Irish threat. Despite being down to 14 players following a yellow card for Miller-Mills, England returned to the attack, recycling the ball through several phases, stretching the Irish line, before a gap opened up for Scott as she picked up from a ruck.

With only a four-point lead the tension continued right to the end, but with most of the play now at Ireland’s end again England were able to secure the win.

Captain Sarah Hunter said: "We know the Six Nations is about performing and getting those wins so we knew it was going to be a battle. We knew that there was going to be no release. They showed up, they played they led but we came back. It was huge for us. We knew the importance of this game because we want to be in with a shot of winning the tournament and so we had to win today.

"It is now all about rest, recovery and analysis because, although we won tonight, it wasn’t perfect. We can always get better and better. We’ll go away, review the areas we need to work on, and we play Wales in a couple of weeks. We’ll enjoy beating Ireland at Twickenham but tomorrow we start again."