Where next for New Zealand? 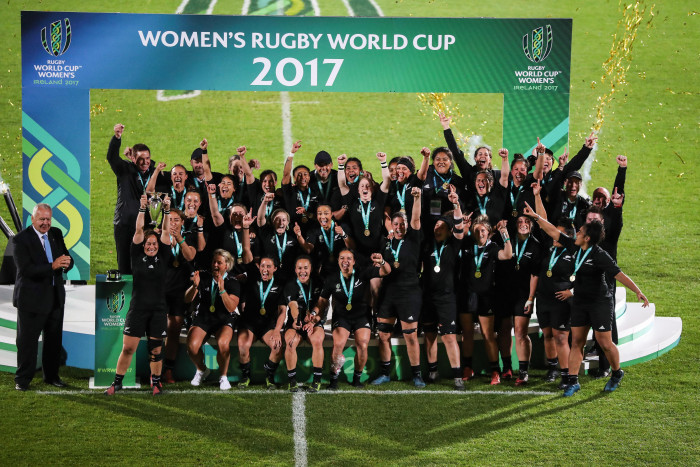 At the end of 2011, New Zealand travelled to England, played three tests– lost two and drew one.

It was the first time the Black Ferns had experienced consecutive losses, and the first time since 1991 the team had remained scoreless in a test match - they lost 10-0, 21-7 and then drew 8-8.

“For the last few years, resources for the women's game have been cut, redirected, rationalised, diverted, put on hold and minimised, and yet the Black Ferns continued to win.

“If the NZRU was wondering how little the women's game could survive on, I think it has found it. The Black Ferns have hit rock bottom and perhaps the outcome in England is a blessing in disguise. Now, at least, we know how little we can get away with before the team suffers:”

New Zealand would be knocked out of the 2014 World Cup in the pool stages to Ireland a few years later, before action was finally taken to better support players and better provide wider resources, helping the team to win back the title in 2017.

But here we are again.

While New Zealand’s results in recent weeks have not been a huge shock – I expected them to find it hard to beat this England team – the manner of the defeats has.

They’ve been absolutely hammered in all three games so far, and it would be a major shock now for them not to go home winless.

They have looked second best in every department and though there is some mitigation for underperformance, this really has been a dismal few weeks, with the team largely chasing shadows over the last three games.

There’s a clue in Dr Palmer’s quote above. The NZRU are investing more than ever into their Black Ferns programme – including through semi-professional contracts and the introduction of a short Super Rugby competition – but decades of historical underinvestment has finally caught up with them.

It’s true there are more resources now for the New Zealand national team than ever before, but that means little when the bar was on the floor and when key rivals France and England were hitting the accelerator on their support for years while the NZRU dragged its feet.

It is no coincidence that France and England are the two countries with the best-established domestic leagues – there’s a reason players from around the world travel to play in both - and that both sets of players are much more settled in relation to how they manage their playing statuses – England as pros, France as semi-pros.

New Zealand are still working all that out; their players aren't playing enough top quality rugby regularly,  they do not look near as physically conditioned as England or France and the reintegration of sevens players into a 15s team requires much more time than those who attempted it on this tour have had.  Given the proximity of the Sevens World Cup to the World Cup itself next year, that could be a significant problem for this team who have a number of players hoping to play in both.

With a home World Cup a year away, the NZRU are in a quandary.

The introduction of the Super Rugby competition will be far too late to make any discernible difference at the World Cup, and it’s clear that the manner in which New Zealand is asking its players to juggle training with work commitments is not working. They clearly cannot do that and be expected to live with England and France.

If they want to win the World Cup, they need a new plan for the next 11 months – one which involves as a minimum, more game-time for the country’s top players and far more time together as a squad with less time spread out across the country.

There are other challenges too -  Alice Soper sets out further arguments here about the game in the rest of the country – but in the short term they need their own operation fix-it.

When New Zealand lost at home to England in 2001 on home soil - a definite shock result at the time - they shook things up to ensure they would win the World Cup in Barcelona the following year.

They brought in leading New Zealand coaches such as Wayne Smith and Robbie Deans to support the then Black Ferns coach Darryl Suasua, to help the team to step up.

As part of the focus, the players trained alongside the then men's Super 12 development teams and played games against a handful of regional women’s teams.

They won that World Cup.

The NZRU might reasonably be perplexed that their recent ramping up of resources looks to be nowhere near enough, but you reap what you sow over the long term.

There is also one additional thing even more damaging to New Zealand than their winless run ,and that is that the aura surrounding the Black Ferns has gone.

After these games, it is hard to see England or France fearing the Black jersey for the foreseeable future, and I suspect Canada would fancy a crack at them too.

With teams often beaten before they ever played New Zealand in the past – that is the most considerable outcome of this Autumn and not even a short-term fix designed to improve the team might change that.