Why England V NZ is too hard to call 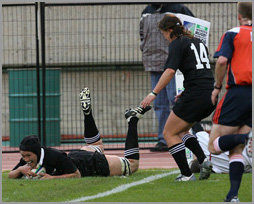 England naming their team to play the Black Ferns on November 14th kick-starts a busy month of womens international matches.

There are some stellar games lined up this month with the two France and Canada tests likely to prove lively and tight while the Asian Qualifiers which start tomorrow will finalise the Rugby World Cup 2010 line-up.

For me though the pick of the months matches have got to be the clashes between the worlds top two sides England and New Zealand - and already Im finding it difficult to predict how the first game will go.

Those of you who know me reading this will know that I love a good forthright exchange of views so its really unlike me to sit on the fence when it comes to making a game prediction.

But this time, its almost impossible to subjectively predict the outcome of the first test simply because so few of us have seen New Zealand in action over the past four years.

Since the World Cup final in 2006, New Zealand have played just four times and all of these have been against Australia. To outsiders that very fact would make England, who have played 30 games in the same period and lost just one of those matches, clear favourites.

But New Zealands Black Ferns are no ordinary team. Thanks to some great research work by our rugby analyst John Birch, consider the following statistics:

New Zealand have played 51 times in the past 10 years winning 49 giving them a phenomenal 96.08% success rate.

So that must make the Black Ferns favourites right?

England have won the last four Six Nations titles, and 10 out of the 14 tournaments played since 1996, a record that includes nine Grand Slams.

So were back to England being favourites again then arent we?

A narrow loss in game one certainly wont be a disaster for either side but England will be desperate for a victory which would provide them with huge confidence and instil the players with belief that the Black Ferns are beatable.

But on the other hand, the Black Ferns rarely get to tour in the northern hemisphere and their talented players will relish a chance to confirm their current status as the best womens team in the world.

While predicting a winner of the first test is tough and please do let me know your thoughts the one thing that is certain is that these games are must-see for all womens rugby players who can get to Esher and Twickenham in the weeks ahead.

Now anyone else on the fence on this?