England ran in 12 tries in a 64-0 hammering od Scotland, with Kay Wilson scroring a record even tries and Amy Cokayne also scoring a hat-trick. 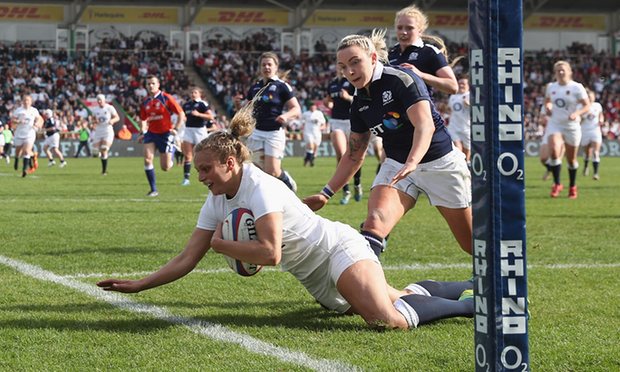 The result means that England head to Dublin for a title decide on St Patrick's Day this Friday night, in what should be a memorable encounter at Donnybrook.

The only blot on England's copybook were the 10 missed conversions from Emily Scarratt -who had a fine game otherwise - though most of the tries were scored out wide.

England were relentless from the off, starting the scoring in the third minute when Kay Wilson took a pass from Scarratt and she had her second four minutes later when she was released by Harriet Millar-Mills.

Scotland No.8 Gemma Forsyth was sent to the sin bin in the 11th minute and soon after Cokayne was on the back of a driving maul to score her first of the afternoon and she secured England's bonus point after 20 minutes when she bundled over. Waterman was then on the end of a flowing move three-minutes later to continue her fine record in the competition.

Wilson sealed her hat-trick in the 26th minute after receiving a long pass from Amber Reed and she showed her finishing instincts seven-minutes later to become the first player to score four first-half tries in the Women's Six Nations.

Cokayne scored her third try and her team's eighth on the stroke of half-time after collecting her own charge down.

It was the first time since 2002 that a team had ran in eight tries in the first half of a Women's Six Nations match.

Wilson started the second period in the same vein as she raced away to cross for her fifth try five minutes after the break.

And on the hour mark the Richmond wing became the first player to score six tries in a Women's Six Nations match when she received another pass from Scarratt.

Scarratt crossed five minutes from time following an Alex Matthews offload and Wilson darted over again soon after to complete the scoring.

'We're thrilled with that performance'

“We’re thrilled with that performance. We had a clear picture about what we wanted to do, to play with intensity and tempo, and we delivered that for the most part," Head Coach Simon Middleton said.

“It’s winner takes all against Ireland next week and that will be a totally different game which we’ve got to be prepared for. We’re under no illusions of how tough it’s going to be but if there’s ever a game you’d want to play as a rugby player it would be next week.”

Scotland Head Coach Shade Munro said: “England are an excellent team. Their speed of ball, speed of realignment of speed of pass was better.

“We took it to them in the second half and tried to implement what we were planning on doing and some of it came off.

“It’s a tough day but we need to move on and learn from it.”