Wins for France and England

France and England won their first World Cup warm up matches this weekend. 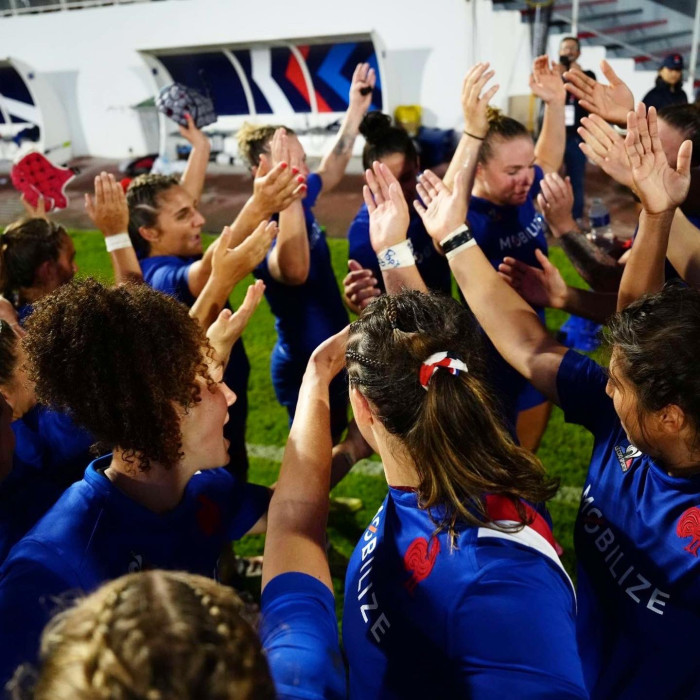 England were far too strong for the USA in front of an excellent crowd of over 10,000 in Exeter.
Both sides looked rusty at times - understandable given relative layoffs of playing regular international rugby, but the hosts were a class above.
The win means England have now won 24 test wins in a row - a record for test ranked sides.
England had two tries on the board early with an intercept from Jess Breach and a neat finish from Natasha Hunt after a powerful scrum.
Hunt should have had a second but spilled the pass on the line, but the wave of England attacking continued when Amy Cokayne powered over from an excellent driving lineout, with the USA reduced to 14.
The Americans struggled to string attacking phases together as England's defence looked solid and then Breach crossed again before Claudia MacDonald scored a crowd pleasing try after her recent injury woes.
England led 33-0 at the break and with Leanne Infante helping to put more shape on their attacking game, MacDonald scored early again, this time a fine weaving finish before Cokyane got her second. The USA improved though through the brilliant Alev Kelter and Kate Zachary and finally they got their rewards with Hope Rogers powered over for a close range try.
England were then remarkably reduced to 13 players with both Helena Rowland (deliberate knock on) and Shaunagh Brown (high tackle) binned. Rowland's error handed the US a penalty try, but there was one more try in England as Zoe Harrison's kick was neatly collected by Ellie Kildunne.
The Americans will take some positives from the second half, while there was also an impressive showing from several England players including young flanker Sadia Kabeya
France 21 Italy 0

A bad looking knee injury to Italian star Manuela Furlan marred a game that did not bring much by way of high quality, despite a blistering start from the hosts in Nice.
These two sides play each other again next week and both will be hoping that they can lift their standards enough to make the match more competitive and less error strewn.
In front of just over 3,000 people, France raced into the lead with a straightforward finish from scrum half Laure Sansus, as the French pack dominated the early exchanges.

The score was converted by Caroline Drouin, and France were over again just a few minutes later, this time when Celine Ferer crashed over for a 14-0 lead.

Annaëlle Deshayes then raced over as it looked like France were turning on the style and would record a comfortable win, but that would be that for the scoring for the next hour.

Emilie Boulard did cross the line after a deft chip and chase, but her score was ruled out by the TMO and both sides were then guilty of poor errors and inaccuracies as the game wore on.

Italy coach Andrea Di Giandomenico, said there were some positives to take.

"Our defence after the three initial tries offered a proof of quality which represents one of the more comforting aspects of the evening. Overall we showed good potential, but we need to improve in various aspects of the game, starting with the ability to maintain possession which has severely limited our offensive effectiveness.

"We lost more than twenty balls and this is not acceptable at this level and for the level with which we will have to compete at the World Cup: it will be one of the focuses on which we will concentrate immediately in view of the next match in Biella against France ”