Wins for Wales and South Africa

Wales will play South Africa in the 9/10th placed playoffs after their victories in the first playoffs. Wales beat Sweden 34-10 while South Africa beat Kazakhstan 24-10. 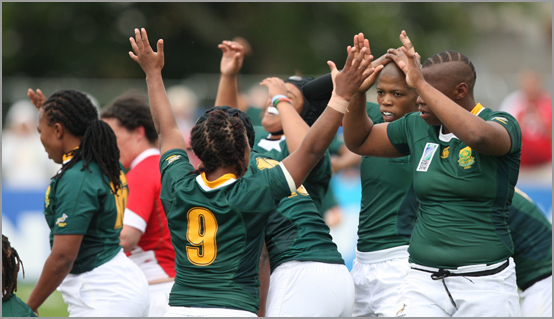 There will be more than a hint of revenge in the air when Wales and South Africa play as the two sides met in the pool stages with the Welsh on the losing end of a tight game.

A noticeable quieter Surrey Sports Park greeted the eight teams who had failed in their bid to get to The Twickenham Stoop. A crowd of around 200 Swedish in their rather fetching Go North t-shirts in one stand, Welsh in the other greeted the arrival of Wales and Sweden for their 9th place semi-final.

Wales kicked off - both team in their changed strips, Sweden in blue, Wales in yellow. The opening exchanges were even - Wales looked slightly bigger and stronger, and Sweden a little cleverer when it comes to back line moves - but soon the same problem the Swedes have had all through the tournament - keeping the ball for more than one or two phases began to count against them as a promising attacking position was lost

It was the Welsh strength that began to have an effect as the half moved on, Welsh forwards disrupting Swedish set pieces - the Swedish scrum was under significant pressure again. At 12 minutes in this forward advantage told. Welsh forward pressure turned over a Swedish scrum, and the resulting penalty took them to the Swedish line. Desperate defence resulted in another penalty and 10 minutes in the sin bin for Jenny Ohman (her second yellow of the tournament).

Mared Evans on the Welsh wing was looking good every time she gets the ball, cutting through the Swedish defence. She set up another Welsh attack on 18 minutes, but after the ball was recyled it was Caryl James on the other win who finally breaks the deadlock. 5-0.

Sweden were now being repeatedly penalised at the breakdown as pressure grew. Another Welsh maul was too strong for the Swedes, the ball finding its way to Sioned Harries who was just held up on the line. A series of scrums on 5m were courageously defended but inevitably the Welsh found their way through to Harris who crashed over with Thomas converting. 12-0

Finally with 5 minutes left in the half, Sweden got into the Welsh 22 and got their first chance to get points on the board when Gemma Hallet failed to roll away. Lina Norman kicked it over.

However Wales soon reversed that score - Sioned Harries broke the Swedish defence again, and Mel Berry touched down. 19-7 at half time.

Three minutes into the second half and the Welsh scored again, Harris finishing off in the corner after a Welsh pressure from the start of half. 24-3.

However, Sweden were not giving up and after a series of Welsh substitutions - Charlotta Westin-Vines touched down for Sweden, skipping through the Welsh defence to score her third try of the tournament - 25-10, as Norman converted.

For a while the game looked more even, and Sweden looked like they might run the game closer but that ended when Lisa Newton almost broke through - brought down after a 50m run by her opposite number - the faster running Elisabeth Osterberg. This put Wales in a great attacking position and after five minutes of pressure they scored again with a try from Laura Prosser. 29-10.

That was almost the end of the game but not quite. In a move that summed up the game another Swedish scrum was turned over again by Wales with Wales taking full advantage, Jamie Kitt touching down after a run from Mel Berry breaks the line. 34-10. And the whistle blew.

South Africa have guaranteed themselves at least a two place improvement in their final tournament ranking after beating Kazakhstan 25-10 in a hard-fought encounter at Surrey Sports Park in Guildford on Wednesday.

This is the third victory of the year for South Africa over the Asian champions and also avenges their loss to Kazakhstan in the 11th place play-off at the last Women's Rugby World Cup in Canada four years ago.

Despite only registering just a solitary penalty in their three Pool B matches, Kazakhstan's physicality has impressed all comers and only a superb last ditch tackle by Phumeza Gadu denied them their first try of the tournament after a typically robust carry by centre Lyudmila Sherer.

As South Africa scrambled back, Saloma Booysen conceded a penalty and saw yellow for her trouble, with Aigerym Daurembayeva then stopped just short of the line as Kazakhstan took a quick tap. A penalty conceded at the breakdown though allowed South Africa to relieve the pressure.

The numbers were soon evened up when Svetlana Karatygina joined Booysen in the sin bin, but although South African full back Zandile Nojoko couldn't add the resulting penalty, when given a more central opportunity just minutes later she stroked it between the uprights to open the scoring.

While there was no shortage of effort from either side, the first half was a catalogue of errors and fleeting half chances squandered. That was until the 36th minute when Kazakhstan finally broke their try scoring duck. Another scorching break by Sherer was the catalyst before South Africa, down to 14 with Dolly Mavumengwana in the sin bin, finally succumbed to a passage of unrelenting Kazakhstan pressure.

After a succession of penalties just metres from the South African line, Tatyana Tur and Svetlana Klyuchnikova combined from a scrum in front of the posts to send Irina Amossova over for Kazakhstan's first try of Women's Rugby World Cup 2010 to see them take a deserved lead.

They would have little chance to build on their lead, however, as captain Anna Yakovleva became the next to see yellow, and on the stroke of half time Kazakhstan were undone by a moment of magic from Gadu, the South African wing waltzing through the defence from 65 metres to touch down, with Nojoko's conversion sending her side in leading 10-5 at half time.

After the break, South Africa were again indebted to Gadu for another great cover tackle, this time to deny Olga Sazonova, but early second half Kazakhstan pressure told when Xena Botha saw yellow and Alfiya Mustafina was driven over to level to scores.

Amossova became the latest to visit the sin bin and it got worse for Kazakhstan when Amina Baratova became the first player to receive a red card in the tournament, Nojoko kicking the resulting penalty to give South Africa a tentative 13-10 lead.

Yet despite their player advantage, South Africa had to wait until the last five minutes to make certain of only their second ever World Cup victory when fly half Zenay Jordaan showed great pace to touch down her own grubber kick.

There was still time, though, for South Africa replacement Cherne Roberts to dive over in the corner to add gloss to a scoreline that was harsh on Kazakhstan, who must now regroup to face Sweden in the 11th place play-off.