The latest reports from the sixth round of Ireland's top league. 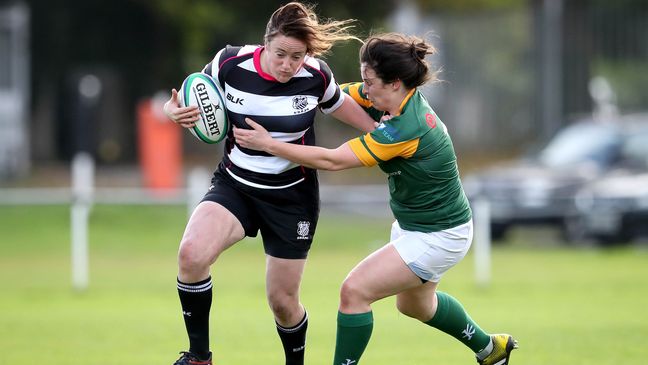 Cook beat St Mary’s convincingly at Templeville Road to record their first away win of the season with a bonus point thrown in for added impact.

The first half was a dogged, determined affair with a depleted St Mary’s pack chipping in with the epic defensive efforts, cutting off Cooke’s attackers at every pass. It was the home side who had the first try of the game too with Saidbhe O’Riordan converting from Ireland international Orla Fitzsimons.

“It took us a while to wear them down,” said Grace Davitt, coach of the victorious team. “We put in a good team performance and although the score didn’t reflect it, we put in a good showing against Old Belvedere last week which helped bring back some of the belief into the team.”

Five tries illustrated clearly how intensely that conviction burned inside the northern team. Emma Jordan claimed two tries and outhalf Gemma Jackson grabbed a full house of scores with a try, penalty and three conversions. Ireland star Clare McLoughlin celebrated her return to her club with a pair of tries.

Davitt remarked: “We played to our strengths today and moved St Mary’s around the park. We didn’t allow them to settle and we managed to keep moving the ball. The forwards provided a great platform for the backs and Amy Davis at nine passed good, quick ball. We came down to Dublin knowing we could win and we were determined to do so.”

The five points garnered allowed Cooke to leapfrog Railway Union into fifth place in the league and they are only a point behind Blackrock, who were on the wrong side of a five try success by UL Bohemians.

In Annacotty, the league leaders maintained their unbeaten run with a bonus point victory over the Dubliners. The home side grabbed an early try but Eimear Corri hared down the wing and evaded all tackles to dot the ball down under the posts making the conversion simple and give her team a two point lead.

That lead was shortlived as UL Bohemians’ response was swift and ruthless. Niamh Kavanagh ran in for a try to put UL Bohemians 10 – 7 in front.

Blackrock held them scoreless for the rest of the first half but the home team cut loose after half time with Ciara Griffing coming on to score a try before Niamh Briggs added a fourth and Kavanagh got her second to help her team secure the bonus point.

Galwegians’ bonus point victory of their own leaves them two points off UL Bohemians in the race to lead the standings but it was a close run thing as Highfield claimed a losing bonus point of their own in a narrow 22-17 win for the westerners in Cork.

Mairead Coyne’s late try rescued the victory for her team who trailed Highfield by 12 -7 at half-time and were tied at 17 points apiece before Coyne’s later intervention sealed the bonus point for Galwegians.

Railway Union let slip another lead, the fourth time they have lost from a winning position this season, going down by 17 – 12 away to Old Belvedere.

Outhalf Nikki Cauhey’s first half try and another, this time from tight head Katie O’Dwyer, put the visitors two points up. They were still leading with ten minutes to go when they conceded a penalty. Ireland legend Nora Stapleton opted to kick for touch instead of going for the posts and from the resultant line out, the pack drove within a metre of the Railway line before Jenny Finlay grabbed the ball and dived over. Stapleton converted from far out on the left hand side to put the home team 17 – 12 in front. Despite severe pressure from Old Belvedere dug out the victory that sees them three points behind UL Bohemians as the league takes a week off.