World Rugby’s women’s test rankings were introduced nearly five years ago, after a long campaign by Scrumqueens. Those following the ups and downs of teams were recently surprised by some unexpected and unexplained changes. We asked World Rugby what was going on. 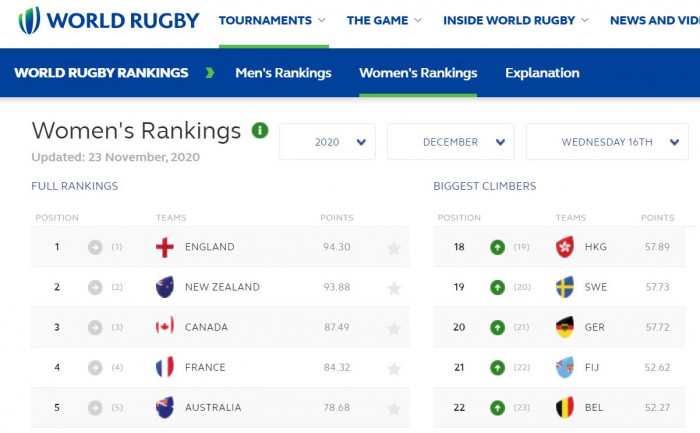 After some years of campaigning the first official women’s test rankings (based, in significant part, on data provided by ourselves) appeared at the beginning of 2016.

The rankings have gradually grown in importance and are now used for the organisation and seeding of the World Cup and regional competitions.

The formula for calculating the rankings is complex but sometimes events take watchers by surprise, and this was particularly the case last month when Portugal, without any explanation, were deducted 24 points, seeing them plunge 31 places from 18th to 49th.

Given Portugal’s one-test history from over 20 years ago it was not an unreasonable move (indeed it can be argued that it did not go far enough) but even so, with the rankings now so important, this apparently arbitrary event did not look good.

“This is largely a teething issue from when the rankings system was introduced”. World Rugby told us. “We wanted to implement a women’s rankings system to drive greater interest and excitement into international rugby and achieve parity with the men’s game.

The reasoning inevitably requires some arithmetical explanation. World Rugby said that all teams in initial rankings were “determined by a starting position of 80 points in 1987* and a deduction of two points every year for inactivity and a cap on the deduction when a team reaches 40 points”.

[*Why 1987, when the first women’s test match was in 1982? Because World Rugby do not officially recognise any test matches involving nations that were not members of the IRB or World Rugby at the time – and several of the most important early women’s nations – such the "Great Britain", Netherlands and Sweden - either were never IRB members or did not join until after 1987. The first test between nations in membership of the IRB  (and so the first test included in the rankings) was Wales v England in 1987.]

In addition from the start of 2020 an “inactivity penalty” has been added to the women’s rankings, bringing them in line with the men. Any team that has not played a test for two years has six ranking points deducted at the start of each calendar year.

Inactivity penalties plus the corrected starting ranking means that “Portugal’s ranking has been adjusted leaving rating points of 34 and a ranking position of 59. The Portuguese union were made aware of this change before the deduction of 24 points was applied on 23 November.”

Portugal is not the only team to have suffered from these penalties – they were simply the most obvious. 6th January 2020 this year also saw Trinidad and Tobago, Denmark, Jamaica, Guyana, Romania, Norway, Bosnia, Thailand, Uzbekistan, Cayman Islands, Namibia, Botswana, Luxembourg, Serbia, Barbados, St Vincent and the Grenadines, and Bahamas lose points.

Because of COVID there will be no deductions this January, but it is intended to penalise inactive unions again in 2022.

In our view these reforms are thoroughly welcome and in anything are overdue and perhaps too moderate, but over time they will make the rankings much more realistic and meaningful – as well as perhaps encouraging some of the above unions to get back on the field again.

It’s just a pity that World Rugby did not explain what was happening!