Our annual look at player numbers worldwide finds that rugby would be a declining sport worldwide… if it was not for women. 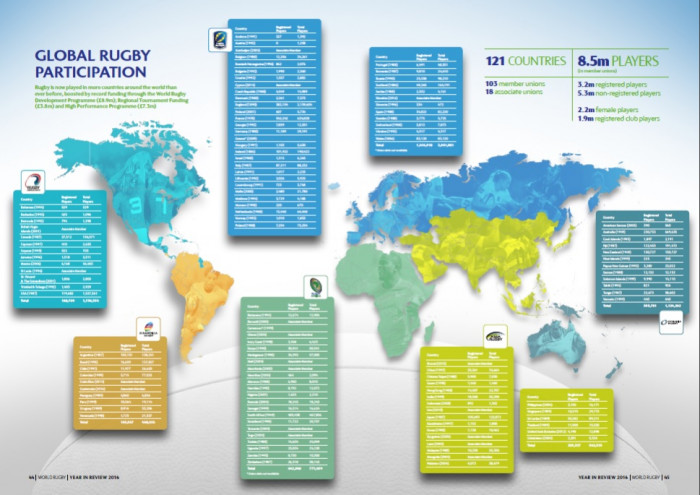 Around the world the number of adult women playing rugby continues to grow – by 10% between 2015 and 2016. That is the headline fact from our annual in-depth study of player numbers worldwide.

But not only that. The number of adult men playing rugby is actually in decline – overall there were more adults playing rugby in the world in 2016 than 2015 only due to the growth of the women’s game.

This may not have been obvious from World Rugby’s announcements, but for the reasons we have explained in detail in past years we believe statistics for registered adult players are the most reliable.

This is illustrated by the data from France in this year’s returns. In recent years the number of registered (“licenced”) players in France has stood at around 11,400 – but something appears to have been lost in translation when they supplied their returns to World Rugby as the in the total of registered players for 2016 is given as… 111,427. Needless to say, this is clearly wrong (though it is included in World Rugby’s overall totals), and seems entirely due to some inexplicably strange junior figures (both for boys and girls) - the adult totals seem more sensible. Fortunately, the FFR have also published their data separately and it roughly agrees with World Rugby’s adult totals (but not the juniors!). So for France we have used that information rather that the World Rugby data.

So – what does the latest data tell us?

Overall adult women’s rugby grew by 10.43% between 2015 and 2016, while the men’s game contracted by 0.72%. Of the 100 countries listed, adult women’s rugby is expanding faster (or as fast as) men’s rugby in 81. If this relative growth and decline continued into the future, there would be more adult women players than men by 2035.

The number of adult women players grew in 68 counties, in 9 countries it remained unchanged, and in 21 numbers fell (in two – Austria and Vanuatu – no data was provided for 2016).

The fastest growing countries were Tonga and Japan – in both there were six times as many registered women players than in 2015. Other countries where the number of registered players more than doubled included American Samoa, Paraguay, Zimbabwe, Colombia, St Vincent, Brazil and Malaysia. Countries were the number of adult women fell significantly – by more than half – were Thailand, Namibia, and Kazakhstan.