Women in the World Rugby Museum

In honour of National Sporting Heritage Day in the UK, Scrumqueens takes a look inside the World Rugby Museum at Twickenham to see what they’ve got on offer in terms of Women’s Rugby Heritage. 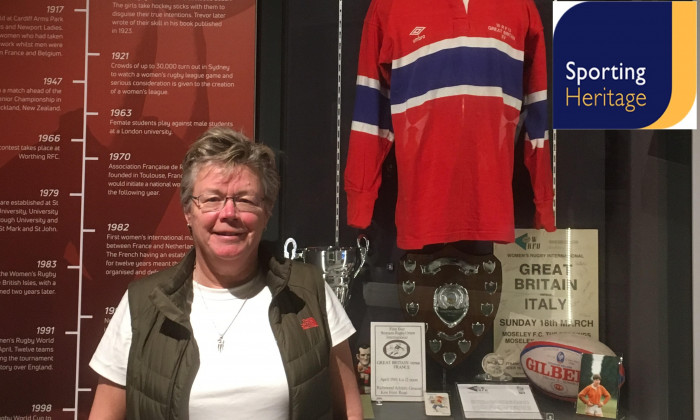 The museum, located in the South stand of Twickenham Stadium, re-opened in 2018 after an extensive refit. Although based in the home of England Rugby, the World Rugby Museum aims to exhibit the heritage of rugby football as played in all different parts of the world and by all people. While rugby union has traditionally been seen as a male sport, there’s a long history of women also playing the oval game, which is reflected in the museum’s permanent galleries.

If you are in search of some women’s rugby heritage, then you’ve come to the right place. A bust of Emily Valentine, the earliest recorded female playing rugby, greets visitors in front of the women’s rugby display case, and you can actually hear Emily’s granddaughter read the extract from her diary in which Emily recalls picking up the ball and running with it in 1887 in a game of rugby for her brothers’ schoolteam.

The women’s rugby display has some fascinating items, including Carol Isherwood’s playing jersey from the very first Great Britain v France international women’s rugby match. The game, on Saturday 19th April 1986, was the first women’s international to take place in England, and many of the GB squad would go on to play for the four home nations as women’s rugby grew across Great Britain and each country formed their own national team. Carol Isherwood captained the GB team against a more experienced French side. She has generously donated her match jersey to the museum so everyone can see an important part of women’s rugby heritage. Of note is the size of the jersey (impossible to get women’s fit rugby shirts back then) along with the long sleeves and heavy cotton material. The shirt is embroidered with the word ‘WRFU GREAT BRITAIN XV’, recognising the first governing body for women’s rugby in Great Britain, the Women’s Rugby Football Union.

The women’s rugby case also has a recent addition of a splendid photograph of the Newport Ladies team of 1917. Munition factory workers took up rugby for some much needed fun and to provide a spectator sport for the rugby loving Welsh communities starved of sport during the first world war. The Newport ladies originally played against one another but were so popular they inspired other local teams, such as Cardiff Ladies, and together raised thousands of pounds for local and war-time charities. Featured in the photograph on display at the museum is Thirza Dunn, whose granddaughter has kindly given the photograph on loan to the World Rugby Museum so that this sporting heritage can be available to the public.

The World Rugby Museum also has objects and information related to the women’s six nations and women’s sevens at the Olympic Games. The museum is to an extent limited on what can be displayed based on what has been donated or loaned – there is therefore a greater amount of objects related to women’s rugby in Great Britain than other countries. The World Rugby Museum has an active collection policy and would love to welcome more women’s rugby heritage items – please feel free to get in contact with Lydia Furse (ljfurse@gmail.com) if you have any items of women’s rugby heritage that you would like to discuss, particularly from outside the UK.

The long history of women in rugby union is still being explored, and there are hundreds of fascinating stories waiting to be told. Our sporting history can be discovered in a variety of different ways – through newspaper clippings, interviews with players past and present, diaries and books – but at the World Rugby Museum, the story relies on objects. Material Culture allows visitors to connect with the heritage of the sport as a very real and living thing – seeing how large Carol Isherwood’s GB shirt is makes you realise some of the practicalities of playing in 1986, and how far sports clothes have come in the past thirty-four years. These precious objects related to the history of women’s rugby can tell a story and through public engagement become part of our sport’s heritage.

* Do you know of any examples of other museums, sporting or otherwise, that have items of women’s rugby heritage on display? Lydia would love to know how the women's game is represented be it in major national rugby museums around the world or in small local museums. We could then highlight any "finds" in future articles.