The third Women's Sevens World Cup takes place this weekend. We look back at the first two tournaments. 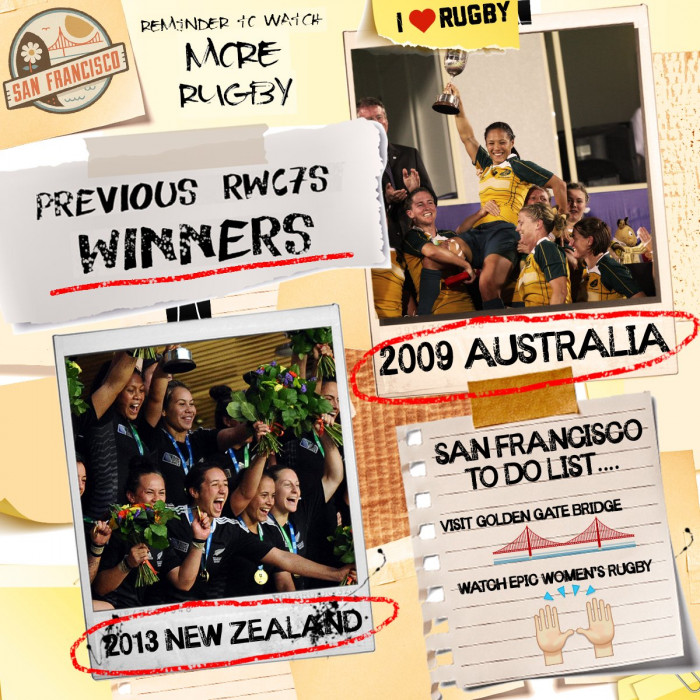 Looking back at the last two World Cups brings into sharp contrast how far and how fast women’s rugby has changed in the past decade.

The first Women’s Sevens World Cup was nine years ago, but a different age.  Only one nation – the Netherlands – had a professional programme and most nations had only played a handful of tournaments. Japan were the most experienced sevens nation, having played in barely a dozen tournaments in the previous 10 years.

The competition itself had been forced on the then IRB by the International Olympic Committee who had rejected their application to include sevens in the Olympics due to their application being centred around a male-only sport. Rugby needed to present a different image to the IOC and the 2009 World Cup in Dubai was enlarged to include a 16-team women’s competition.

A worldwide qualification process featured 72 countries (33 from Europe), though some leading nations did not take part at all - Scotland in particular pulled out of European qualifying only a week or so before the competition. The 16 qualifiers were:

There was almost no form guide for the tournament has hardly any of the participants had played any countries from outside of their regions - 14 of the 24 pool games were between teams that have never met before.

Even so there were clear favourites, particularly England, the European champions, who had prioritised sevens preparation over the Six Nations.  The professional Netherlands were also expected to perform well, along with Australia (Oceania champions), Canada, and – despite this being only their fourth ever official tournament – New Zealand.

The tournament featured “surprise” results from the start.  France topped a wildly unpredictable Pool A above Australia after the much-fancied Dutch – who had beaten France - crashed out following heavy defeats to China and Australia. In Pool C the more experienced Spain topped the pool ahead of Canada. England and New Zealand, on the other hand, raced through their pools without dropping a point.

Shocks continued into the knock-out stages where three of the four pool winners fell at the quarter-final stage – France lost to the United States, Spain went down to South Africa and England were narrowly beaten by Australia. New Zealand, on the other hand, comfortably beat Canada in the last eight and then United States by 14-12 in the semi-finals. Australia beat African champions South Africa in the last four, before beating the Ferns in the final by the odd try in five.

The unpredictability of the tournament, and four of the seven knockout games in the main draw being decided by a single score, resulted in the tournament being seen as a great success. The whole event was witnessed by the observers from IOC who were delighted with what they saw, paving the way for rugby sevens to be granted Olympic status.

Four years later in Moscow in 2013, and women’s sevens had moved on massively. The first Women’s Sevens World Series had just been completed, with champions New Zealand as a result favourites to take the title. The Olympics were also now a reality and consequently Moscow was being promoted as being the last World Cup.

However, despite being World Series champions and 2009 runners-up, New Zealand were not a top seed as the seedings were based in part on a series of IRB invitational tournaments before the World Series that New Zealand had not taken part in. The top seeds were England, Australia, Canada and United States.

81 countries entered this time, including the four semi-finalists from 2009 and the Russian hosts who qualified automatically. With Asia losing a spot to Oceania the 16 qualifiers for the second World Cup were:

Tunisia, Ireland and Fiji were to make their World Cup debuts.

With much more international experience behind the top nations most of the pool stages went as expected, except for Pool B - where debutants and bottom seed Ireland stormed to the quarter-finals with wins of African champions South Africa and Asian champions China - and the last game of the pool stage when England, who had not conceded a point up until that stage, were beaten 17-15 on the final play by Russia.

It was a defeat that put England up against New Zealand in the last eight – and another quarter-final exit to the eventual winner. The United States ended Ireland’s great run at the same stage, but the memorable results came in the final two quarter-finals when first Russia were edged out 15-12 by Canada before Spain left everyone reeling, knocking holders Australia out with a 14-10 win.

The way was open for the Ferns and they took it, beating United States 19-10 in the semi-finals and Canada 29-12 in the final.

That was five years ago – and the game has moved on again. The World Series is now established, the top teams know each other very well indeed, the next Olympics are around the corner, and professionalism among the top teams is now the norm making it most unlikely that a team making their debut in San Francisco will repeat Ireland’s success in Moscow.

Even so the new format will mean that no team can relax. As France and Spain found out in 2009 and Australia found out in 2013 in knock-out play anything can happen.