With an England record crowd forecast for this weekend we look back at the incredible growth in attendance at Women’s rugby internationals and the Women's Six Nations.. 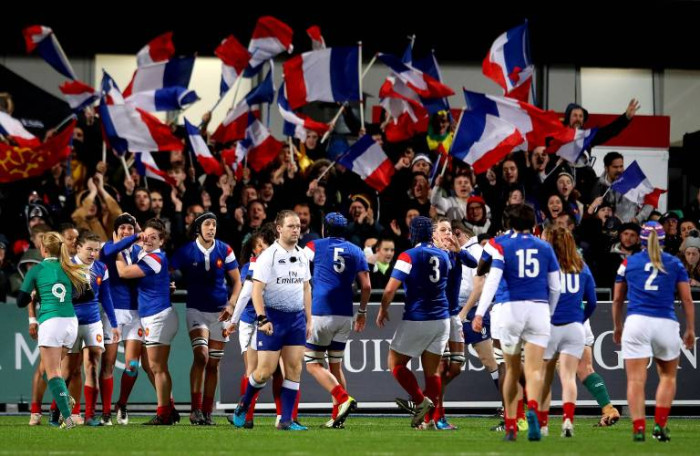 How many people were in the crowd when you went to your first women’s international? If it was before about 2010 it is probably not too much of an exaggeration to say that you probably knew most of them.

When England made Old Albanians in St Albans their home from 2006-7 they did not even bother selling tickets. The “crowd” of a couple of hundred was either friends and family of the players, or girls and their parents from local clubs who had been recruited to form “guards of honour” and play half-time exhibition games.

In contrast this weekend England are expected to fill Kingsholm in Gloucester - the third largest rugby stadium in country – potentially setting a new record for the highest crowd for a women’s match in the UK. It is a remarkable fact that up to half of the men’s Premiership grounds may now be too small for England women’s internationals.

The 2010 World Cup had resulted in a rise in interest with all of the 3000 tickets for each day of the pool phase being snapped up, and 13,253 attending the double-header third-place and final at the Stoop and an estimated 15,000 staying behind or walking in without paying at Twickenham in 2014 to watch England against Ireland after men’s game between the two teams.

That aside, while England moved on from Old Albanians and were now selling tickets for games away from Twickenham, they were still playing most of their games at Esher (capacity 3,500) and not filling it.

The step change came after the 2014 World Cup. Crowds and TV audiences took even the French by surprise, and an England win increased interest in England. Afterwards records for games in France – where crowds had always been bigger – started to fall with almost every game. In 2016 we stood back in awe when nearly 7000 attended a game at Bourg-en-Bresse only to see 10,000 turn up at Vannes to see England, and 11,158 show up at Perpignan for Ireland as France also took the 2016 Six Nations title.

With highlights also now appearing on the BBC, 2017 saw Wales pull in 4,113 (a record until this year) at Cardiff for their game against England, and Italy a record 4,500 at L’Aquila for Ireland (still an Italian record), while Scotland started recording attendances with 1,200 attending their first game at Broadwood. Over 6000 saw Ireland play England at Donnybrook, and 3,628 saw England play Scotland at The Stoop – at that time an England record for a ticketed standalone game.

The next big change came in 2018 when England dipped their toe into the idea of playing outside London – and drew over 6000 at The Ricoh for a double-header with an England men’s U21 game. After that in 2019 they filled the 5,000 seat Castle Park in Doncaster before blowing all records out of the water with 10,545 at Sandy Park Exeter for Italy.

France, however, stole the headlines in 2018 with a world-record 17,740 at Grenoble for their game against England. Spain also pulled in over 9000 for the European Championship final in Madrid in 2019.

10,974 regained the England crowd record for The Stoop for Wales in March 2020… just before the COVID pandemic brought everything to a halt.

Tomorrow ticket sales in Ireland are closing in on a new record, and England play at Gloucester with we hear only few tickets now left in a ground with a capacity (discounting hospitality) of 15,983.

If that is the crowd it will be roughly 100 times the number of spectators who were at St Albans 16 years ago.

Wherever attendances go next, a full Twickenham for the World Cup final in 2025 seems a real possibility.