The exciting news this week – for anyone interested in the history of women rugby – is the announcement that International Centre for Sports History and Culture at De Montfort University, in Leicester, and the World Rugby Museum at Twickenham were coming together to fund a PhD project called ‘Women in Rugby Union: A Social and Cultural History, c. 1880-2016’ 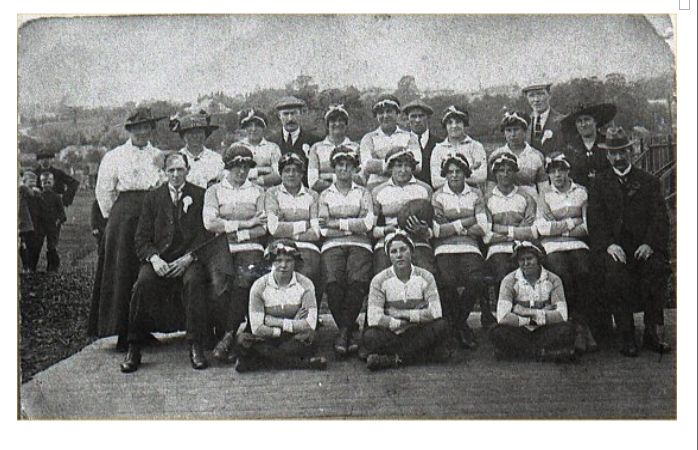 We circulated news about this on Twitter and Facebook and the interest has been huge, so we’ve got in touch with Professor Tony Collins at De Montfort, who is behind this initiative, to ask him about the background to the project, what he hopes it will reveal about the game, and what skills anyone thinking of applying should have.

Where did the idea to launch this study come from?

It emerged through discussions as we already have a PhD student working on the history of England (male) internationals and it was generally felt that something similar on women’s rugby was long overdue as nothing has been done – no histories written (in English at least) - and also due to the growing importance of the women’s game. Also the Rugby Museum at Twickenham, when it reopens, wants to have far greater coverage on the women’s game.

So we’ve got a grant for a PhD student to study the history of women’s rugby for a 3.5 year period using the extensive resources of the library at Twickenham. But they will also need to look at newspapers and archives as far back as possible.

What sort of things do you hope that the research will uncover?

One of the great thing in the last 10 years is the digitisation of newspapers which makes research much simpler – though it is still far from easy – and we are suggesting only a starting point of 1880 as that is currently the first date, but who knows – we might find stuff earlier.

And as most of the women’s football matches were commercial affairs it would not be surprising if they changed the code of football they were playing depending on where there were playing. So if they were playing in Bristol or Wigan it might be rugby football rules, but if it was Blackburn or Birmingham it would have been Association football. One example is the 1881 game in Liverpool where the reports talk about “touchdowns”. But touchdowns stopped being part of Association football in the 1860s, and Liverpool would have been seen as being a rugby city in the 1880s, so they could well have been playing rugby.

So, I think there is a bit of digging to be done there as well, going back into the beginnings of the game.

Also although we will be mainly concentrating on the UK, and may depend on how we scope the study with the student, we want to give it as much of a global footprint as well can as there are other areas that might be explored such as the 1891 tour in New Zealand and unexplained rise and fall of “barette” in France in the 1920s.

There are plenty of other areas to investigate. Were bans on women playing certain sport in the 1920s really due to commercial concerns, or were they a part of the post-war move to take women back out of the factories and into the homes?

It’s also curious that, although there were some games in Wales in the First World War, generally there was not much of a push for women to play rugby during either of the wars. But another student we have is working on a thesis on women and in rugby league, where she has found that women’s football in strong in rugby league areas because women who wanted to play rugby league were told “no you can’t – go and play soccer, that’s more suitable”, so I think that will be interesting to see if that was the case with rugby union as well.

So, this will be as much an investigation into changing attitudes to women in society as much as women in rugby.

Will the student have to live in Leicester?

There is no requirement to live in the Leicester area – though the student will have to come to Leicester for tutorials, training and things like that. So the location does not matter.

Obviously, they will have to spend a lot of time at Twickenham (working through the Museum’s archives) and going through the British Library collections, though their digitisation of newspapers is going ahead rapidly so they would probably not have to spend too much time in the Library itself. Students not located in Britain might find it more difficult, but if they have the right background, expertise, attitude and enthusiasm then that is the most important thing.

What sort of person are you looking for?

We have set the bar high as to who we want – as we would with any PhD – because we want to make a significant contribution not just to rugby history but to women’s social history in general. And so as an academic thesis we want to look at gender issues as a whole and how rugby is related to that, and how it changed and shifted over time, and how movements in society have influenced what was acceptable.

We interview in June, and the project will start on the 1st October 2017 and then it runs for three and a half years, ending in 2021.

This is still a largely unexplored field, so having someone who can work full time on it will be able to progress much further and give us a fuller picture.

What we are looking for is someone who has the historical background and skills, so it does not have to be a recently qualified student. In theory, a rugby background is not needed, though it would be advantageous. The key is that are really enthusiastic about the project and that they can deliver a first-class piece of historical research that will end up as the definitive book on the history of women in rugby. And – with the Museum being the sponsor of the project – the production of a high quality piece of research will be an important indicator of the esteem and position women’s rugby now has within the game as a whole, with significant resources being spent on a book that will do justice to the past and future of the women’s game.

And we are very keen to work with the rugby community on this, so we want the student to play a role in the community, bringing the history out into the game as a whole.

More information about applying for this studentship can be found here.