Worcester made history by lifting the English Women’s Premiership title at the weekend following a convincing 8-48 win over Wasps. 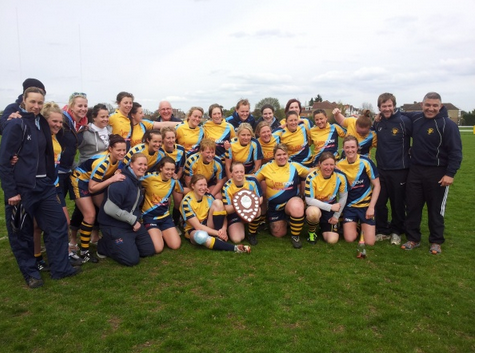 It’s a first ever title win for Worcester, who went into the weekend level on points with Richmond but with a huge +79 points difference.

Worcester got off the mark immediately with a dynamic run from Sarah Guest and a fine conversion from Megan Goddard coming in the opening minutes for a 0-7 lead. Seven minutes later Goddard touched down herself after a fine run, powerfully stepping and swerving through the home defence and duly converting her own try.

Wasps though, playing for pride, worked their way back into the game and found themselves in good territory with Sarah McKenna knocking over a penalty after 30 minutes to get them on the scoreboard.

Worcester went on to dominate the second half with Sarah Guest showing some fine touches in midfield and with Rochelle Clarke growing in influence up front.

Twice they were held up over the line but finally Clarke drove over out  wide and when Charlotte Keane raced over out wide the bonus point was won.

Three minutes later, Pippa Crews raced over the line and Guest grabbed an excellent try, running through several defenders from inside the Worcester half. Another try from Rhiannon Watkins was the icing on the cake and though Wasps ran through a try of their own at the death, Goddard scored on the fulltime whistle for a comprehensive win.

The win meant that Richmond would have needed a cricket score and bonus point over Bristol to have had any chance of winning the title and though they managed to win, the 24-15 margin was not enough to prevent the title going to Worcester.

Elsewhere Aylesford were promoted to the Premiership following their 18-15 playoff win over Thurrock.