The three pools for next year's Women's Rugby World Cup threw up some exciting looking regional contests with key national rivalries at all play. 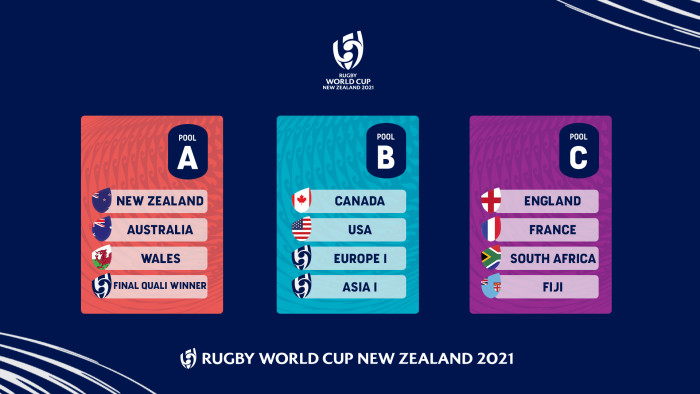 Pool A saw hosts New Zealand paired with Australia and Wales along with the side which emerges from the final qualifiers next year.

Pool B sees the USA and Canada matched, while the Europe 1 team (anyone from Ireland, Scotland, Italy, Spain, Russia or the Netherlands) and Asia 1 (likely Japan) named

Of all the teams, the hosts must be happiest. New Zealand avoided France and Europe 1, which could throw up a strong and experienced contender and they get an exciting contest against nearest rivals Australia, which will be fun for fans but which should be straightforward for the Black Ferns.

It means a fairly easy ride into the quarter finals, which are part of the competition for the first time.  which might make it interesting with other sides surely jockeying to try and avoid facing the reigning champions in the first stages of the knockouts.

Pool B will bring an exciting clash between the USA and Canada, two close rivals and two teams who have barely played any rugby recently. That makes this pool a good one for the side that emerges as Europe 1 - with that team likely to have had far more tests under their belts, and more time together to build cohesion.

Pool C will be a cracker. England and France usually throw up thrilling clashes, and though England seem to have stolen a march recently, in a World Cup game anything can happen. Fiji might make life tough for both but neither they nor South Africa should seriously trouble either.

The draw saw New Zealand Prime Minister Jacinda Ardern, together with Rugby World Cup winners Melodie Robinson, Dr Farah Palmer and Dan Carter,  draw the balls in front of more than 400 guests at SkyCity Theatre after a moving cultural welcome from Ngāti Whātua as the kaikaranga (callers) opened the event with the unique Māori tradition.

While all pools are going to bring exciting games, the introduction of quarter-finals does rather take away some of the unpredictability of the tournaments up to now. In the past, for example, defeat in the pool stage was almost a knock-out blow, unless a team was lucky enough to get the "best runner-up" spot. England against France would have been a virtual knock-out match.

But with eight teams qualifying from the three pools the top two - plus best two third place teams - will now make the knockouts. As a result “le crunch” will mean much less, only affecting where in the quarter-final draw England or France will end up.

In fact, with just South Africa and Fiji against them in Pool C, England and France should have an easy ride to the last eight. Fiji have never played outside the Pacific or Asia before and COVID has deprived them of any hope of gaining experience since they qualified. South Africa are similarly lacking in recent international experience - they were well beaten by Scotland in their most recent outings just over a year ago. The likely margin of defeats they will suffer makes it very unlikely that Pool C will produce a "best third" team.

So we can expect three teams from Pools A and B to make the last eight. However, that does not make these pools predictable. not least because we do not yet know who all the teams in these pools will be.

The fourth team in Pool A may be the lowest ranked but will be no pushover as it is likely to a European team - Ireland, Italy, Scotland or Spain. New Zealand will qualify comfortably, but Australia and Wales are not guaranteed to join them as whoever that fourth team is will be quite capable of beating them.

Based on rankings and recent results Pool B will likely see Japan joining Canada, USA and the best of those four European teams. This will be the most interesting pool as anyone - even Japan - will be quite capable of beating anyone else.

Perhaps what this format does demonstrate is that the women's version of the World Cup must move to 16 teams in 2025. Eight teams qualifying for the quarter-finals from three pools of four risks too many games being only about determining who plays who in the last eight. That lack of jeopardy risks making the pool games less interesting than they might otherwise be. Once COVID is behind us women's fifteens will hopefully continue to expand. The teams will be there in 2025, so let's make this the last 12 team World Cup.

Black Ferns captain Eloise Blackwell, speaking at the event, said: “Sitting there next to Fiao'o Fa'amausili, a legend of the game, and it was pretty nerve-racking watching those balls being picked out. It’s interesting how the pools have come out; we’ve got an Australasian pool, a North American pool and a European pool. Across the pools, there are some quality teams.”