World Cup Round 2: Three to watch

We pick out three of the must watch games in round two of the Women's Rugby World Cup. 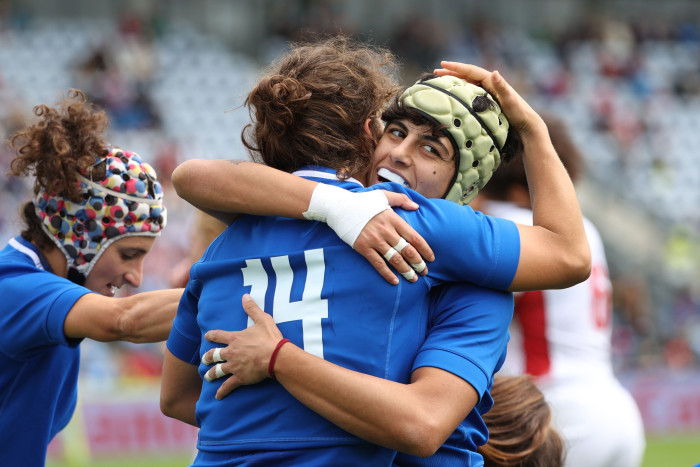 It may only be Round Two, but this is already knock-out rugby.

Whoever loses this game is unlikely to beat England or France in Round 3, and so will end bottom of the pool, but whoever wins stands a great chance of reaching the quarterfinals.

And predicting who that will be is impossible to say. The rankings suggest South Africa, but Fiji’s position is mainly due to their playing very little test rugby prior to this tournament, and almost none against highly ranked teams.

The only form guide we have is just as inconclusive.

Both teams have played Japan this year. Fiji lost 24-14 in May, but were let down by poor discipline after racing to a 14-0 lead. South Africa drew a two game series with Japan, winning 20-12 after losing the first game 15-6 – the ‘Boks, like Fiji, taking early leads in both games, holding on in the second game after having been pegged back in the first.

Last weekend both sides showed signs of huge progress, though in quite different areas of the game.

South Africa raced out the blocks playing rather as if their lives depended on it, making life extremely tough for France who struggled to get much cohesion into their attacking game. They also worked tirelessly at set piece, and their scrum power resulted in several turnovers and penalties.

Fiji on the other hand threw the ball around with abandon, especially when England kicked loosely to them, scoring three excellent tries and holding their own relatively well in the scrum but struggling to defend England's maul. They looked however disinterested in defending in the second half, perhaps as a result of inexperience and also visibly tiring in the face of a bigger England side who eventually wore them down.

If South Africa can stay disciplined, kick sparingly and continue to power through their scrum, this could be their day, but if Fiji on the other hand defend marginally better and continue to attack sublimely, then a historic win is on the cards.

Either way this one should be fascinating between the two up-and-comers of international rugby.

On the one hand, games between these two in recent years have been tight enough to suggest that this will indeed be close. On the other, England’s win ratio is so high (72% across the 50 games they have played against each other) in this fixture that it is also hard to see beyond another win for the favourites.

France were worked very hard by South Africa last weekend, particularly in attack where the ‘Boks made them fight for every inch for over an hour, and at the scrum where they were put under intense pressure, conceding several penalties.

Captain Gaelle Hermet, who has been a mainstay since the last World Cup, only makes the bench, as she continues her recovery from a knee injury but she will arrive in this match surely sooner rather than later as France will need to have all their best players on the field if they're to grab a win.

The benefit of the plethora of games these two teams have played in recent years means there are unlikely to be massive surprises in how they go about things. France like to deploy a well-structured kicking game run through scrumhalf Laure Sansus (they kicked more than any other team last weekend) and she is the spark through which much of France’s attacking game is orchestrated from. Stop her and England will go a long way in stopping France.

England bring back Marlie Packer, who was superb in France earlier this year, where they will be hoping that over the 80 minutes, their defence can be a little less disjointed than it occasionally appeared early on against Fiji.

There are exciting match-ups all over the field – Zoe Aldcroft and Madoussou Fall are two of the best locks in the world, Sarah Hunter (winning a quite remarkable 137th cap this weekend) and Romane Menager are world-class number 8s by any measure,  and despite injuries to players in their backline, France have named an incredibly quick and talented back three.

France haven’t lost a World Cup pool game since 2006, England never have. This should be a cracker.

Though Italy’s win over USA was dubbed a surprise, in reality they are a team on the rise who surely would win lots more games against non-European opposition if they were given half a chance.

The benefit of playing strong regular opposition in the Six Nations is that teams like Italy are well able to stay in a game even when they are under pressure. That is also the reason why Scotland's game against Australia is hard to call, because the Scots, like the Italians, can defend doggedly and frustrate sides who don't know them very well.

With the brilliant Veronica Madia and Beatrice Rigoni able to put players into space quite beautifully, Canada will have to work harder in defence than they were forced to last weekend and expect the battle up front to be much closer - though Canada will surely relish the challenge of an Italian scrum which struggled last weekend, winning just 40% of their own ball back.

Canada’s own set piece was hugely impressive all round against a smaller and less experienced Japanese team and this is likely to be the cornerstone of their game this weekend. With the brilliant Sophie de Goede leading the charge, they will also seek to dominate the lineout drive, an area that went well for them when these sides met earlier this summer.

That was Italy's first ever game outside of Europe and though they lost (34-24) they will have taken heart from scoring some excellent tries in a free flowing game.

An Italian win this weekend would justifiably be called a 'surprise' and they are well capable.

Best of the rest

Scotland v Australia is now a must win for those sides if they harbour any hopes of a quarterfinal berth and there is no recent form guide as these two sides haven't faced each other since 2002. Scotland are on an eight game losing streak now and it will require an enormous mental shift for them to snap it given the manner in which they gave up what looked surely like a win against Wales. Hannah Smith moving to the wing suggests the Scots understand that Australia's greatest threat comes out wide, while Australia need only to apply some consistency over 80 minutes, and they can be a threat to any team.

USA have never lost two of their first games at a World Cup before and they will be desperately seeking to avoid that fate here after the disappointment of the loss to Italy. They should be too strong for Japan and will likely look to Canada's blueprint of using their physical strength and power to dominate. Their set piece was mixed last weekend through - they lost five lineouts on their own throw, but their scrum was excellent with a 92% win rate alongside winning several penalites.. Japan have huge potential but tended to seek to play too fast and loose at times last weekend. If they can be patient and tighten up then this could be close.

New Zealand are fully expected to beat Wales, but I expect Wales to make it hard for them, at least for an hour. Losing Alisha Butchers is a huge blow for Wales - she is arguably their best player - but Siwan Lillicrap will bring power and experience to settle the pack. Welsh discipline was awful last weekend and had it been dealt with better by the referee, they surely would have lost. They cannot afford that this weekend against a New Zealand team which has shaken off its nerves and will be seeking to settle their combinations and patterns after so much change this year in their team.