As the Sevens World Cup approaches, the squads have started to be unveiled for the 16 competing women's teams. We'll update this page  with each squad as it is named. 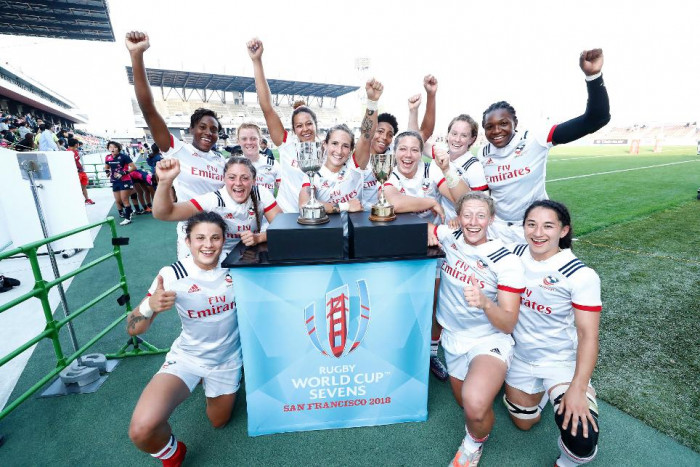 This event was delayed a year so it wouldn't clash with the 2016 Olympics  and it features an innovative knockout format at meaning that teams will have to win every match to be crowned World Cup winners. Teams only know who their first game is against.  Although this World Cup has been going since 1993, it is only the third edition to feature women's teams, with Australia winning back in 2009 and New Zealand winning in Moscow in 2013.

Teams in order of seeds.

1 New Zealand.. will be defending their title and coach Allan Bunting said this was the most challenging squad he has ever had to name."It was definitely hard but that's exactly where we want to be. In our trials there was so much motivation, excitement and skill set; we know we have selected the right team. They kick off against Mexico
Squad: Shakira Baker, Michaela Blyde, Kelly Brazier, Gayle Broughton, Theresa Fitzpatrick, Sarah Goss - captain, Tyla Nathan-Wong, Ruby Tui, Stacey Waaka, Niall Williams, Tenika Willison, Portia Woodman.

2 Australia..will be co-captained by Shannon Parry and Sharni Williams, who returns to the national side after overcoming an ankle injury that has ruled her out since the 2018 Commonwealth Games on the Gold Coast. Ellia Green also returns from injury. “Obviously being knockout, it’s really hard to plan. You can have any number of teams depending on how you go and how they go," coach John Manenti said. "You can’t buy experience and the fact that most of the squad have been through it and done it over the years, and more recently in Paris last month, that will put them in good stead.
Squad: Lauren Brown, Charlotte Caslick, Emilee Cherry, Ellia Green, Demi Hayes, Page McGregor, Yasmin Meakes, Shannon Parry (c), Evania Pelite, Alicia Quirk, Cassie Staples, Emma Tonegato, Sharni Williams (c)

5 USA: The hosts, coached by Richie Walker, are seeded 5th and face China in their first game. He's names a squad of 12 in which nine played at the World Cup last year and four played in the Olympics. Among them, newcomer Ilona Maher will build on her successful two-try tournament debut in Paris, following the lead of a seasoned group lead by Captain Nicole Heavirland.“We’ve really spent the last several weeks evaluating where our focus and our mindset needs to be in order to perform to the best of our abilities. Our players have been building towards this tournament for years and to represent their country at home is remarkable in and of itself. We look forward to sharing our journey with home fans in San Francisco. (Walker)
​Squad: Ryan Carlyle, Lauren Doyle, Cheta Emba, Joanne Fa’avesi, Jordan Gray, Abby Gustaitis, Nicole Heavirland (Captain), Alev Kelter, Ilona Maher, Naya Tapper, Kris Thomas, Kate Zackary

6 France: France were the top European team in the World Series and continued that form into the European Championship, a remarkable change from five years ago when David Courtiex used to complain about the lack of interest in sevens in the FFR. Since then the France's officially part-time squad have improved year on year, surpassing Spain, England and now Russia. A week of acclimatisation alongside their men's team - and the launch of a striking new kit - has produced a team that should be contening for medals.
Squad: Montserrat Amédée, Coralie Bertrand, Anne-Cécile Ciofani, Caroline Drouin, Läurelin Fourcade, Camille Grassineau, Lina Guérin, Fanny Horta (Cap), Shannon Izar, Marjorie Mayans, Carla Neisen, Chloé Pelle, Johanna Sainlo

7 Fiji: Coach Iliesa Tanivula says the side is ready for a tough start in the Rugby Sevens World Cup women’s opening pool game against Spain that will determine their future in this year’s tournament. Ana Maria Roqica will lead the side which has five surviving members from the 2013 rugby 7s world cup. “We have selected the best 12 players and we have faith in these girls that they will deliver the goods for the country. We are concentrating on Spain because we need to beat them before we can proceed further in the competition,” he said. “We have studied their game and they have a well-balanced team.. We finished fourth in last year’s series where we automatically qualified for the world cup and the aim now is to do the nation proud."
Squad: Ana Maria Roqica, Rusila Nagasau, Asinate Savu, Viniana Riwai, Pricilla Siata, Luisa Tuisolo, Miriama Naiobasali, Mereula Toroki, Rejieli Daveua, Ana Maria Naimasi, Tima Ravisa, Merewai Cumu.

9 Ireland: Lucy Mulhall will captain the Ireland women’s side after recently leading the team to a bronze medal finish in the opening leg of the Rugby Europe Grand Prix Series. Ashleigh Baxter, a key forward and Ireland’s most-capped sevens international, is set to feature in her fourth World Cup tournament, having played in the Rugby World Cup Sevens in Moscow in 2013 and two 15s World Cups in France in 2014 and Ireland in 2017. Coach Anthony Eddy added: We have had several close games with England this season so it is set to be a challenging way to start the tournament, but the players are very focused and know what’s needed of them to get a result.”
Squad: Kathy Baker, Ashleigh Baxter, Claire Boles, Aoife Doyle, Katie Fitzhenry,  Stacey Flood, Louise Galvin, Eve Higgins, Lucy Mulhall (captain), Amee-Leigh Murphy Crowe, Deirbhile Nic a Bhaird, Audrey O’Flynn, Hannah Tyrrell

13 South Africa: Coach Paul Delport has included four uncapped players alongside the experienced duo of Zenay Jordaan and Mathrin Simmers. Jordaan was named in a play-making role for the tournament to be played at AT&T Park, resulting in the dual-coded international to attend her third Rugby World Cup Sevens tournament, a record for a Springbok Women's Sevens player. She also played at two Rugby World Cups in fifteens for her country.“This is the best squad we could pick,” Delport said.  “We had some injuries following the Commonwealth Games, but realised that we needed to expand our search for players who could add value to our programme. The four new players all tick boxes in areas where we were found lacking in the past and I am confident that they will add to our ability as a squad.
Squad:  Marithy Pienaar, Christelene Steinhobel, Buhle Sonomzi, Babalwa Latsha, Zinhle Ndawonde, Mathrin Simmers, Zenay Jordaan, Zintle Mpupha (captain), Eloise Webb, Nadine Roos, Snenhlanhla Shozi, Kimico Manuel

16 Mexico: Coach Robin MacDowell selected 15 players from a initial pool of 70 players who have been preparingin Shawnigan Lake School on Vancouver Island for the past week. "For the first time since I have been involved in the program since 2014 I feel my team is ready for battle at this level", he said. "We have been together for over 2.5 months straight! The sacrifice, commitment to each other, desire, and belief in what we can conquer is something so powerful. We are on a mission with the entire country behind us.  We will go straight from the World Cup back to our training centre in Mexico, City and then one week later to Columbia to claim Gold at the Central American & Carribean Games.Veteran Dany Rosales captains the squad.
Squad: Isabela González Berazueta (Burgos); Ariana Lewis; Brenda Esmeralda Weinel (Mártinez); Alejandra Daniela Rosales (Robles); Yazmín Ramírez (Laguna); Irayda Karmin Macedo (Navarrete); Maria Fernanda Carrillo (Jimenez); Carolina Monsserrat Sandoval (Rivera); Zoe Tuyu (Salcedo); Margely  Isabel Angulo (Duarte); Adriana Mendoza (Silva); Karina Landeros.