The fourth round in this year's five tournament series is full of interest, with Australia and Canada trying bounce back from disappointing results in the last round, while New Zealand look to build on their tournament win. 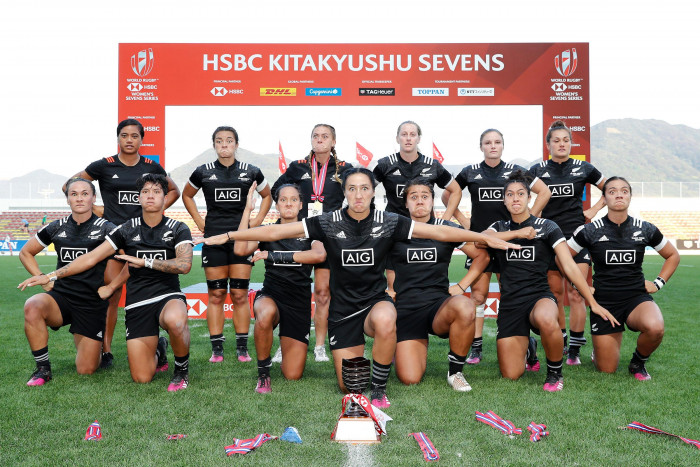 This is not a pool that should cause New Zealand too many problems, though it does include two teams – England and Fiji – who, while they have been inconsistent this season, are still capable of upsets - indeed England have the best record of any team against the Ferns, apart from Australia.

After back to back victories at the Commonwealth Games and Kitakyushu the Ferns are on a roll. “We have been happy with the results but there is always room to improve. For us we need to look at our execution under pressure and making sure we are making good decisions at those times,” said coach Alan Bunting.

Ruby Tui, returns after illness, to make the team even stronger. “Ruby is amazing; she has been jumping out of her skin to get back out there. She enhances our environment on and off the field and as a leader brings so much to our squad. Having missed out on some tournaments she was able to look from the outside in, she has a renewed energy and a sense of whakawhetai.”

Risi Pouri-Lane, fresh from leading the New Zealand U18s to a place at the Youth Olympics is line for a debut on the World Series. “Halfback is a difficult position and one that we are trying to grow depth in which is why we have selected Risi. She may only just be out of school but she is a mature player that is learning and growing quickly.”

“I’ve made five changes due to injuries,” Iliesa Tanivula said. “I hope the players will perform and step up to the roles given to them. We will try to up the ante despite the short preparation time. We hope to put on good show.

But Tanivula has also called on Fijians to be lenient in making comments about his national side on social media. Negative comments about the team’s performances has affected the players while on tour, he said, and he called on supporters to be mindful of what they post on Facebook against the team, especially when it loses.

“I always tell the girls to ignore all the nasty comments that are posted on social media and focus on what is ahead of them,” he said from Canada yesterday.

“The players are adapting to the weather because it is very cold with the temperature of 14 degrees,” he said. They will do the best and play well this weekend. We just want to improve on our performance and keep working hard. The world cup is around the corner and I have been monitoring their performance. Sevens training is intense. You got to deal with it, and mental toughness is what I always remind the girls of.”

England coach James Bailey has made four changes to the England squad. Olivia Jones, Chantelle Miell, Katie Mason and Sarah McKenna due to Emily Scarratt, Holly Aitchison, Claire Allan, Natasha Hunt and Amy Wilson Hardy being unavailable due to injuries. Megan Jones has been ruled out for the rest of the season after undergoing anterior cruciate ligament (ACL) surgery last week.

Such a long injury list cannot help England with what has been a very mixed campaign, with the Commonwealth Games the only real highlight. The continued absence of the talismanic Scarratt in particular will be a blow – England play noticeably better when she is on the field.

“We feel for those players who have missed out on selection due to injury and wish them a quick recovery, however this misfortune opens up a great opportunity for some of our squad members who weren’t able to play in the Commonwealth Games to demonstrate their talent and ability on the world stage,” said James Bailey. “Since coming together at the beginning of the season we have put a huge emphasis on our performances being based on the effort of the entire squad and I’m looking forward to seeing that in action this weekend in Langford.

“We’ve had some great encounters against Fiji recently and New Zealand are on excellent form off the back of the Gold Coast and Japan so it’s brilliant that we the opportunity to play them again next weekend.

“Despite being the invitational team, we know that Brazil have got some strong World Series experience and are an impressive outfit, so we’re looking forward to the challenge that playing them will bring.”

Brazil lost in the World Series qualifier last month to China (in the pool) and Belgium (in the quarter-finals), defeats that suggest Brazil may, perhaps inevitably, be losing ground since the Olympics and their loss of a regular spot in the World Series. The 31-5 loss was the second largest ever loss against China, while the game against Belgium saw them lose to the lowest ranked opponent ever. The failure of their U18 team to reach the Youth Olympics is also a suggestion that their crown, even in South America, may be slipping.

Injuries and the closing stages of the Top 8 combine to produce a team that is perhaps not quite as strong as the one that reached the final in Kitakyushu. Veteran Pauline Biscarat – a sevens specialist and a feature of the squad since the FFR started taking the format seriously in 2014 – returns, along with Jessy Tremouliere, who has not featured since Rio but who will be looking to repeat her standout Six Nations performances.

In Japan France suggested that they have found a solution to the conundrum of switching players between fifteens and sevens, recording their best-ever World Series performance despite brining in several players fresh from a gruelling Six Nations. This weekend will perhaps show whether that was a one-off.

This will not be an easy pool by any means. France’s all-time record with Russia and the United States shows that their opponents have a slight historic advantage.

Russia sit in third place in the World Series – their best ever position – but have chosen to use Langford as a development opportunity. Alena Mikhaltsova, Elena Zdrokova, Maria Perestyak, Arina Bystrova, Kristina Seredina, Bayzat Khamidova, Daria Lushina are all rested, giving us a squad that severely tests our Cyrillic/Latin text convertor.

Russia do have “form” when it comes to sending squads like this, and with a World Cup to come and little else to play for in the series, it is perhaps an understandable move.

While the new players are bound to find it tough, and avoiding the Challenge may be the height of  their expectations, Russia’s continued ability to unearth fast, tough, talented players means that any selection cannot be taken for granted.

The United States find themselves third seeds in this pool thanks to a tough Kitakyushu that saw them miss out on the quarter-finals but win the Challenge Trophy on day two.

This time around coach Richie Walker brings in Lauren Doyle, Kayla Cannett and Joanne Fa'avesi. Doyle returns to the colours for the first time since the end of 2016, while Fa'avesihas not played for nearly a year. Canett also returns to sevens for the first time this season having played in the XVs World Cup in Ireland in the interim.

"Langford presents another opportunity for us to master our game plan and improve our position in the World Series. With less time in between stops, we are ready to face the upcoming competition head on and with a mindset engaged in challenging our competition throughout the tournament," said Walker.

"France and Russia will not be easy to overcome after top performances in Kitakyushu, while Japan has shown a competitive side we cannot underestimate. All three games will be unique in their own right, forcing us to remain consistent and adapt quickly."

If history was the guide, the USA would be well placed as they lead in all-time head-to-heads against all of their opponents, but what they need most is consistency. They have had some great performances against the top opponents in recent tournaments – especially New Zealand – but can slip up against unexpected opposition. Even so, Russia’s experimental team means that the USa should comfortably avoid the Challenge this weekend.

11 points adrift at the bottom of the series, relegation seems certain now for Japan, who have only won one match this season, and that against Papua New Guinea.

However, the experimental Russian team at least gives them a realistic chance of a pool win in this round, and a win over Brazil (who they have a great record against, with five wins in 11 games) is very possible. This could just be Japan’s best tournament of the series.

A stack of injuries were at least partially responsible for what was – in Australian terms – a disappointing result in the last round in Japan.

So the big news that Charlotte Caslick, is back after a head knock in the Commonwealth Games final meant she missed Kitakyushu, will be a massive boost for the team, and interim coach John Manenti.

However, Alicia Quirk Ellia Green and Sharni Williams are all still out, and Cassie Staples is being rested, giving Kitakyushu debutants Lauren Brown and Yasmin Meakes a second tournament to prove themselves.

"We were pretty disappointed not to go all the way in Kitakyushu so the whole group is very keen to get back out there in Canada and rekindle our top form,” said Manenti

“It’s a good chance to freshen up Cassie (Staples) both physically and mentally, as it’s been a big slog over the last few months while Alicia (Quirk) has battled with a knee injury so it’s important we get that right ahead of Paris but also the World Cup.

“It’s a tough pool we have in Canada, especially facing the hosts first up on day one. It’s said a lot but there’s no easy games in Sevens and the gap between the top teams and the rest is really closing – and fast. So we have to be accurate and clinical from the get go if we want to top the podium in Canada."

Spain are having a dream season – three back-to-back quarter-finals, and a semi-final in the last round – puts the Spanish in equal fifth, alongside Canada. Just two changes from Kitakyushu – Elisabet Martinez and Maria Ahis being replaced by Enara Cacho and Sabina Hurtado – will also be a positive.

However, this is a massively tough pool with no weak teams. The match with Ireland is certainly a must win if Spain are to continue their impressive record.

Anthony Eddy, has announced a squad with just one change from Kitakyushu, with Ulster's Claire Boles coming into the line-up.

Commenting on the squad announcement, Eddy said: "This weekend will be exciting because we play three tough games in the pool - Spain will be confident following their semi-final finish in Kitakyushu, Australia are in a position that they can wrap up the overall series, and Canada will be on home ground.

"That will certainly be a challenge but the girls know what they are capable and of and exactly what is required to get the performance they are looking for."

Ireland have made just one quarter-final this season in Sydney and, drawn in the toughest pool, they are going to find it very hard to repeat that.

After their worst ever World Series tournament in Japan, Canada have the extra pressure of playing at home to try to put things back on track. Canada slipped to fifth in the standings as a result.

Coach John Tait has kept faith with the Kitakyushu squad, with just two changes. The return from injury of captain, Ghislaine Landry is balanced by Brittany Benn missing out though injury, awhile Pam Buisa replaces Olivia Apps to make her debut.