The 2016/17 World Series comes to an end in Clermont this weekend. While the identity of the champions is all but tied up, there are other matters that will need to be decided. 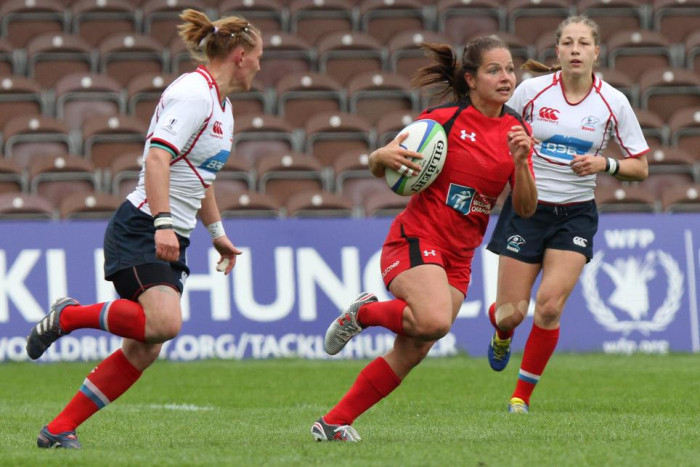 As we enter the final leg, New Zealand bestride the tournament like a colossus. With four tournament wins out of five they need only qualify for the quarter-finals to confirm their fourth title, which essentially means that if they beat Japan and Ireland it will all be over by lunchtime on first day.

However, there is still plenty else to decide – and some of it could go right down to the wire.

Sevens World Cup qualification is all sorted out for New Zealand, USA, Spain, Canada, Australia, Fiji and Russia – but one place remains and England and France are still in competition for it. France have a 10 point lead, but France finished as low as eighth in Kitakyushu. If they were to slip up again, and England were to reach the final (or even finish third) they could steal a place in San Francisco.

Relegation could also go down to the wire. With Spain just four points ahead of Brazil, a quarter-final spot for the Brazilians could push Spain towards the trapdoor.

Silver and Bronze. Canada and Australia go into this tied in second place on 82 points, with Canada having finished ahead of Australia in three of the five tournaments. Seedings dictate a semi-final between the two teams that would decide who has bragging rights for next season. Similarly, 4th-6th place is also a battle with such six points separating Russia, Fiji and the United States.

New Zealand. Gayle Broughton and Terina Te Tamaki re-enter the playing 12 where they are joined by Tayla Reti for the first time. Reti only started playing Sevens earlier this year after being discovered through the Go For Gold programme which identifies new sevens talent to develop for the Olympic Games in 2020. The fourth change is Tenika Willison who will be a travelling reserve.

Coach Allan Bunting said the team is not taking anything for granted heading into the final tournament of the series. “France is another opportunity to be build our foundations for the next few years preparing for the Tokyo Olympics in 2020. We are focused on fronting every challenge, being courageous, expressing ourselves and making the most of every opportunity. We have a purpose of leaving mana in France.

“With a number of experienced players preparing for the fifteens Women’s World Cup, Clermont-Ferrand provides another chance to give other players experience at the next level. Tayla Reti has only been in our environment a short time but has shown real determination and courage to learn and grow at every opportunity and has earnt her chance to wear the black jersey.

“With the Commonwealth Games and Sevens World Cup next year it is important that we continue to develop depth and foundations in our squad.

“Day one will be a tough one. Our immediate focus is our first game against a very fit and determined Japan. Ireland is improving fast and had a very strong tournament in Canada and USA can beat anyone when they get things right.”

With the USA fairly sure about their final place in the series, and with World cup qualidication not an issue, coach Richie Walker includes three debutants in his 12-player squad - Tess Feury , Natalie Kosko, and Sara Parsons (already caped at XVs). Parsons was a starter and reserve in the two matches tests against Canada, and is the fourth XVs player to earn follow-up with s sevens call-up after Sylvia Braaten, Jordan Gray, Samantha Pankey, and Hope Rogers' appearances earlier in the season. .

Ireland take forward the same squad that did so well in the European Grand Prix in Malemort last weekend:

Japan get a second guest spot as next season's promoted team. They will be hoping for a better performance than in Kitakyushu where they discovered how far the World Series has moved on in a year. Unfortunately with the JRU concentrating on XVs World Cup preparations some of their leading stars are in the test programme.

Two players get a chance to same rugby at this level for the first time - Tomomi Kozasa and Ateca Yumi Bativakalolo - in a squad that includes four teenagers, three under 18.

Canada won in Clermont last year. This year John Tait’s main problem is looking for someone to replace the workload done by the inspirational Jen Kish, who suffered a fractured pelvis on day one in Langford and is the only change to the 12 players for that tournament which was Canada's best result on home soil.

“Kish consistently wins us a lot of ball in the air and on the ground so we will need our other forwards to compete hard in those areas particularly,” said Tait. “We have good options at hooker with Natasha, Charity and Megan, who are all very strong in the ground game. Our props Hannah, Bianca and Caroline have been competing consistently well at restarts.”

Pamphinette Buisa and Kaili Lukan have been named in the squad and are in line for their series debuts in France as Canada look to defend the HSBC Clermont-Ferrand Sevens title.

“We always believe we can win, so we’ll just be focused on performing consistently, no matter who we play,” said Tait. “We won there last season with everyone making quality contributions and will hope to get the same this time around.”

This tournament will also be the last for veteran Ashley Steacy, who is retiring from the sevens team at the end of the season.

“Ashley is such a quality person that connects with everyone in the team,” said Tait. “She has always been a quiet leader and always competes her hardest. She is as tough as they come and puts her body into every tackle she makes and runs herself into the ground every time for the team.

“Ashley has paved the way for players like Kayla Moleschi and Breanne Nicholas, not the biggest in stature but they are fierce competitors that put the team first. I’ve learned so much from her and I’m really grateful to have been her coach for so long.”

Russia were outstanding last weekend, only looking remotely threatened in the final, and are clearly the best team in Europe at the moment . It is something we have grown used to but, given the size of their pool of players and the funding available to them, is a remarkable performance. With no real pressure on his team Coach Andrey Kuzin includes two debutants in his squad for this weekend - Polina Buravleva and Evgenia Steblinskaya.

Confident that they will tie up World Cup qualification in Kazan next month, England will field a number of development players alongside six names from the team that finished fourth in Malemort last weekend. Katie Mason, who captains the side, Deborah Fleming, Kelly Smith, Lotte Clapp, Holly Aitchison and three-time try scorer Olivia Jones were all part of the fourth-placed team last weekend. Like Jones, Lottie Holland, Sophie Tandy and Jess Breach have all represented England at U20 level in the past two seasons.

"Our goal for this weekend is to give international sevens experience to more players as part of our ongoing aim to build the strength and depth of our programme," said coach James Bailey. “It’s exciting to see how the squad continues to develop and with so many players having made their debuts on the World Series this year, we want to continue to give them opportunities to progress, learn and build experience.

“We were pleased with our performance in Malemort, and while this weekend will throw up new challenges, it will be another valuable learning opportunity for this young squad.”

Its all or nothing now for Brazil. They have to reach the quarter-finals to have any chance of retainig their World Series place - and even that would not guarantee anything as they would also have to finish at least three spots higher than Spain. It is a huge ask for a team that has not achieved this all season, made all the more hard with the absence of their world class star player Ednam Santini.

They almost certainly have to beat England - but on the plus side they did manage that in Sydney, and are now faced with a semi-experiental Roses squad so could pull something off. If they manage that they will also have to avoid significant damage from Canada and Russia, which will be just as tough.

Australia see Evania Pelite return after recovering from the knee injury she suffered in Kitakyushu in April. Co-captain Sharni Williams also makes a quick switch back to sevens having started at centre for the Wallaroos in their 44-17 loss to New Zealand in the International Women's Rugby Series earlier this week.

Cassie Staples keeps her place after an impressive series debut in Langford when she scored five tries as Australia finished third, a result that leave the Olympic champions tied with Canada in second place on 82 points, 14 adrift of series leaders New Zealand.

“We know we haven’t performed to the standards we strive for this season and we have to own and live with that as we look towards the next HSBC Women’s Sevens World Series,” said coach Tim Walsh. “We have a chance in Clermont-Ferrand to finish the 2017 season the way we ended the 2016 season.

“We came into this season as the hunted and now we are the hunters again. The bitter taste of winning silver and bronze, with some complacency from winning gold has been the difference. We have talked about the need to win every moment of the matches we play and we know we face these challenges in a tough pool.”

Four injuries last weekend left France with barely enough players to play in the final - yet in broiling heat they very nearly won the game. Such is the strength of the French squad. Firmly placed as Europe's number two team, France should wrap up World Cup qualification this weekend despite missing key players such as Fanny Horta.

Fiji stumbled badly in the last round, but coach Iliesa Tanivula has retained most of the players from Langford. Only three players - Miriama Naiobasali, Reijeli Daveua and Alowesi Nakoci - miss out and that is due to injury. They have been replaced by Asinate Savu, Lavenia Tinai and debutant Lavena Cavuru.

Tanivula said it has been a long season for them but “we managed to remain consistent.”

World Cup quialification is assured for Fiji, but FRU chief executive officer John O’Connor, while congratulating the team, has challenged the team them to finish at the top 4 of the series. “This should be the target and should be motivational for you to go out there and do your best,”O’Connor said.

Spain were fifth in Malemort last weekend, and though they remained unbeaten against non-WSWS opposition, it was a tough weekend. This weekend it will be tougher still with their very World series survival on the line. Four points is not a huge cushion over Brazil, and would melt away if Brazil were to make the quarter-finals. The team features only one change from last weekend. with Nerea Aguirre replaced by Maria Ribera who returns after recovering from an injury.

Spain will be nervously watching Pool B and will have the slight advantage of playing their games knowing what Brazil have already done. They have to win at least one game to make the quarter-finals - which would effectively guarantee their WSWS place - but even without that winning the Challenge would probably be enough.