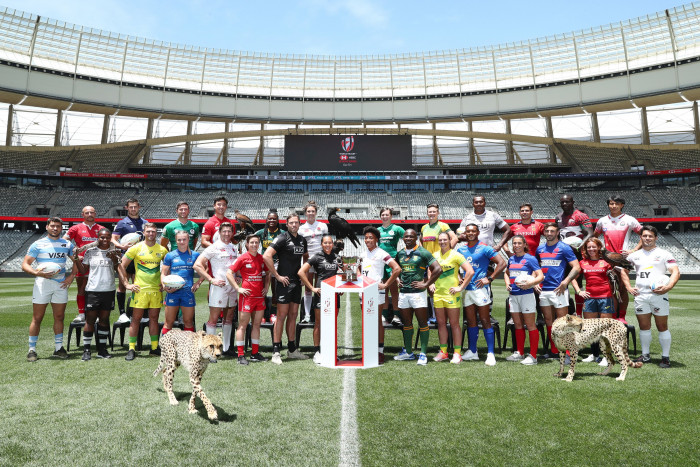 World Series Sevens arrives reaches Africa for the first time this weekend, kicking off just five days after an exciting and at times unpredictable Dubai round – the shortest period between rounds for three years.

The tournament will see Canada's Bianca Farella and Kayla Moleschi draw level with New Zealand's regular captain Sarah Hirini – who today became the first female recipient of the Tom French Memorial Maori Player of the Year award in its 70-year history – as the most-capped players. All three will be playing in their 36th event, out of just 40 tournaments to date.

South Africa return to the series as a guest for the first time since 2017, when they impressed reaching the quarter-finals. Since then the team has suffered blow after blow from off the field (which we have reported, from time to time), the most recent being the confirmation that they will not be attending the Olympics despite winning the qualifier in Tunisia.

The decision has already cost them at least one promising athlete, just as happened when they were barred from the 2016 Games.

With the new nickname of “Imbokodo” they play on home soil for the first time. and captain Zintle Mpupha simply cannot wait. "This is new to us being at home and we are all terribly excited and nervous," Mpupha said. "We know two things – this group will play with massive heart and we will not give up.

"We realise the pace will be faster, the hits will be harder and the split-seconds will even be less. But knowing that we will be playing in our stadium, in front of our crowd, with our emblem and flag on the jersey, will give us massive energy and encouragement.

"We really hope to have a huge crowd when we play as we want to show our hearts, our guts and our talent to those who came to support us."

South Africa have a very inexperienced side with six series debutants and Zenay Jordaan and Mathrin Simmers the only players with event appearances in double figures. It will not be an easy return either as they face Dubai champions New Zealand in their opening match at Cape Town Stadium, and they will be desperate to improve on their last major international outing, when they finished in last place at the 2018 Commonwealth Games.

The Fern are again be led by Tyla Nathan-Wong, today named as their Sevens Player of the Year to go with the team's accolade of New Zealand Team of the Year. The Ferns have made two changes from their victorious squad in Dubai with Youth Olympic Games gold medallists Risi Pouri-Lane and Mahina Paul coming into the 12, the latter to make her series debut.

Fiji, also in Poo A, also have a debutant in their squad for the second weekend running, with Ani Mei Likuvagali given her chance to impress as they target a second Cup quarter-final in a row, while Russia welcome back Aline Arterchuk and Snezhanna Kulkova for their first appearances of the 2020 series.

Canada, as runners-up in Dubai for the second year running, are the top seeds in Pool B and will face France, Spain and Brazil. Canada and France are the only two teams to named unchanged squads from Dubai with the latter's Chloé Pelle to become her country's third player to reach 30 series events.

Spain bring Lucia Diaz into the squad after she made her series debut as an injury replacement in Dubai, while Rafaela Zanellato also steps in to the squad after being 13th player, swapping places with Aline Bednarski in a Brazil side that ended a 12-match losing run on the series with victory over Japan in the 11th place play-off last weekend.

Dubai bronze medallists USA will face Olympic champions Australia, England and Ireland in Pool C. The Eagles have made only one change with Kasey McCravey coming in to replace Kayla Canett, who drops down to 13th player.

By contrast Australia have three changes to their squad with Evania Pelite ruled out through injury. Yasmin Meakes, Demi Hayes and debutant Jakiya Whitfield come in for a tournament that will see captain Sharni Williams and Shannon Parry move ahead of Charlotte Caslick to become their country's most-capped players.

England, who beat Ireland in sudden-death extra-time to finish ninth in Dubai, bring in Beth Wilcock, while Deirbhile Nic A Bhaird also makes the 12 after being used as an injury replacement last weekend. Kate Farrell McCabe will make her series debut if, like Nic A Bhaird, is called upon in Cape Town.