As the Women's Sevens World Series (WSWS) nears the end of its second season there have been few announcements about what will happen next. We put together what we have learnt - and what we can deduce - and also look at how it will affect Olympic qualification. 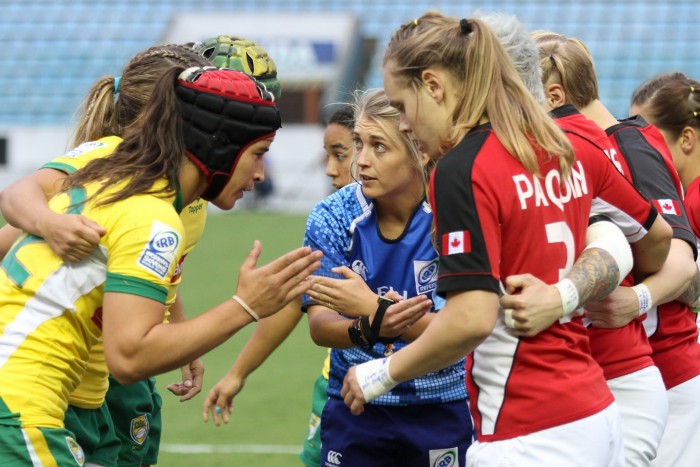 When Kenya’s Doreen Remour sold the Tunsian defence a dummy in their semi-final she – perhaps unknowlingly - bought her team a ticket to possibly the most important tournament they have ever attended.

The fact that Kenya went on to lose the subsequent final of the African Sevens to South Africa was less important than that try. By beating Tunisia, Kenya stole their vital number two African ranking at a crucial moment, and are now just one tournament away from core status in the Women’s World Series - in Olympic qualifying year.

Although there has yet to be a formal announcement from the IRB, we can now piece together the qualification structure for next season’s WSWS - and how all this will fit in to the qualification process for the Olympic Games.

* The number of core teams for next season’s WSWS will increase from eight to eleven, with Brazil likely to be given the twelfth place if they do not qualify by another route.

* The top seven teams from this season’s WSWS, which ends in Amsterdam next month, will automatically qualify.

* The remaining four places will be then be decided at a 12-team tournament, likely to be played on the weekend of 13/14 September, at a venue to be decided.

* The subsequent Series will then consist of six tournaments, with very probably more than the current 12 teams at each event, (as otherwise there will be no guest teams).

A similar promotion and relegation tournament presumably will then take place in mid-2015 to decide the teams for the 2015/16 tournament, though details about how many teams will be relegated or promoted have yet to be announced and the clash with Olympic qualification may alter things (see below).

In practice it is easier to understand this by looking at the teams likely to be involved.

The current top seven teams in the WSWS are:

If these remain the top seven they will all qualify as core teams for next season’s tournament.

The remaining four places will be decided at a tournament involving the following teams:

* Brazil, as hosts
* The top four teams from the 2014/15 WSWS
* The winners of six special regional Olympic qualifiers, to held after the conclusion of the WSWS.
* The winner of a “repecharge” event for the six teams who finish as runners up in he above qualifiers, to be played at the end of 2015.
(Note that if England are among the top four teams then Great Britain will qualify for the Olympics. If they do not finish in the top four it is possible (even likely) that a Great Britain team will take part in European qualifier).

The structure of the qualification process means that it is hugely to the advantage of any team if another team from the same continent finished in the top four of the WSWS.

Similarly the European qualification process will be a very tense affair unless one or two teams get a automatic place.

It also worth noting that teams who have already qualified cannot take part in these regional qualification competitions.

Because of this, and the apparently different (but overlapping) requirements of the 2015/16 WSWS (as above), these will almost certainly have to be special Olympic qualifiers and NOT just the annual regional championship.

This is made even more likely because the competitions will have to be played in a fairly tight window between June and December 2015, which is outside the dates normally used for championships in Africa, South America and Oceania.

It is a long way ahead, but it is worth taking a look at the Women’s Sevens series leading up to the 2016 Olympics – the 2015/16 WSWS. At first glance it would seem logical that the core teams in this competition should be the 12 Olympic teams – however this is unlikely to be the case.

To begin with there is the England/Great Britain problem (for contractual reasons, only the former can take part in the WSWS), but more seriously the 2015/16 WSWS will almost certainly start before the final 12 Olympic qualifiers are known. As a result it is quite possible – even likely – that not all of the Olympic teams will be Core teams

Clearly there is a reason why there has not been any official announcement, and that is because piecing all this together is not an easy task.

However what is clear is that there is going to be far more women’s sevens played over the next two years – and with far more at stake – than ever before. A lot of teams with Olympic dreams will have these shattered, possibly within the next few months, and especially if they are from Europe where the mathematics means that some major teams will not be in Rio. It is going to be fascinating to watch, but amazingly tense to take part in.