The 2016/17 World Series was always going to be in the shadow of the Olympics that had gone before, and the 15s World Cup that is to come meaning there was inevitably much rebuilding squads after retirements, a significantly lower priority for sevens compared previous years, and how each nation coped with these pressures was one of the more interesting features of the series. 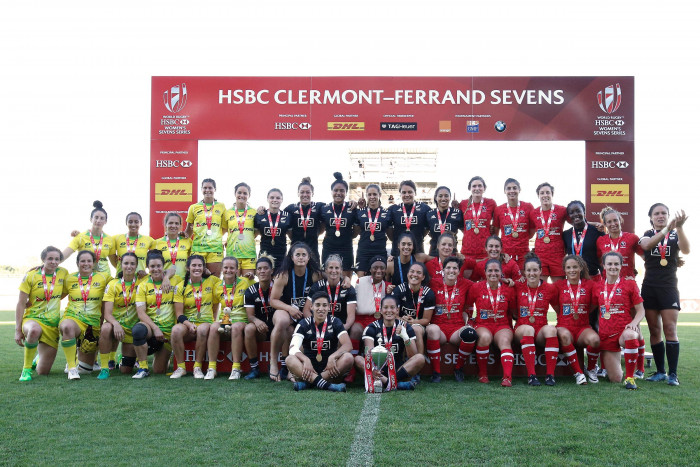 New Zealand’s year showed what astonishing depth they have. They had their share of post Olympics retirements, tried out a raft of new players throughout the year, released players from the sevens squad for World Cup training and fifteens internationals but still proved (almost) unbeatable. There was a certain pattern to their play, with a degree of fragility in their opening pool games gradually being shaken off before a dominant day two. It could be argued they were helped by always being the top seed in their pool which meant that new players could get comfortable against lower ranked teams first (often the guest team), but even so the way the Ferns never give up and never consider a game lost until the final whistle is equally key. From the first to the last it never really looked like the title would go anywhere else.

Only Australia and Canada seriously challenged them. Despite the upcoming World Cup both continued to put their sevens programme first, releasing few if any players from their clearly separate sevens squad to fifteens training or test commitments. Australia fielded fewer up and coming teenage stars this year, though their squad was still a year or two younger than Canada’s in most rounds.

Both reached three finals, but only Canada lifted a title – in Sydney as Australia fell to the “curse of the host team” – something that Canada only shook off this year at the third attempt. They met five time over the year – all semi-finals – with Canada winning 3-2, including a 33-0 win in Kitakyushu, but some margin Australia’s biggest defeat of the year and one of their biggest ever. Yet Australia had the final world, taking the runners-up spot by the narrowest of margins. This rivalry will run and run as both also try to catch the Ferns.

Four more teams come in a group, well behind the top three, but also well ahead of the rest and separated by only six points in the final rankings – Fiji, Russia, United States and France. Despite being so closely matched they had rather different pressures over the year, but most, one way or another, perhaps exceeded expectations.

Fiji and Russia had no fifteens concerns (Fiji did have a few World Cup qualifier games but kept their sevens squad firmly away from such distractions). Perhaps aided by this both had excellent seasons, Fiji finally beginning to hit the levels of performance that we always knew they could, while Russia survived a new coaching team, reduced funding, and a raft of injuries to key players.

Russia perhaps benefit from sevens being the only format for domestic women’s rugby, but they also have a tiny player base compared to their main rivals and are playing a game that remains well off the radar domestically. That they continue to achieve what they do remains remarkable.

Fiji could not come from a more different background – perhaps only New Zealand comes from a society where rugby is so valued. Fiji’s Achilles heel (apart from funding) has always been the patriarchal society where women’s rugby has been traditionally frowned upon – the stories behind all of the older players all in the squad all seem to include tales of them sneaking off to play rugby against parental wishes. Those attitudes are beginning to change in the islands, and the performance of the team has followed that – and is now perhaps leading it. Fiji have improved so much, but there is still a lot more to come.

USA and France do have World Cup concerns, but despite that they have continued to perform well over the year. France also had the added incentive of a Sevens World Cup place to win, with England their main rival. Over the year both moved in slightly different directions, the United States (after a serious misfire in Dubai) became the only team to beat New Zealand and reached the last eight in the all tournaments after Dubai, but only made their two semi-finals in the first half of the season. France, on the other hand, came into their own only once the Six Nations was firmly out of the way – though they made the last eight in every tournament, something matched by only the top three and Russia. What was all the more remarkable for France was the way they shrugged off four injuries the week before to reach the semi-finals in Clermont.

The secret of USA and France’s success? Hard to say, but possibly experience as they generally had some of the oldest squads. The challenge maybe maintaining this year’s successes while integrating younger players in seasons to come.

Next up we have two teams separated by just three points at the end. Not seriously in the running for honours, neither was also seriously threatened by the drop – but that aside England and  Ireland’s seasons were perhaps rather different.

Ireland was, at the start, full of controversy as they sent key players away to the sevens in the middle of the Six Nations. It was a pragmatic decision as, after missing the quarter-finals in Dubai, they did not want to be scrapping in a relegation dogfight and perhaps calculated that there might be points on offer with France and England concentrating on the 6N.

In the end it could barely have gone better as Ireland not only had a great Six Nations but also made the last eight in both Sydney and Las Vegas opening enough of a gap for them to not be seriously concerned with the battle for survival in future rounds. Two more quarter-finals followed in Langford and Clermont and Irish managers must be very satisfied indeed how the critics have been so effectively silenced. They took a gamble, and it paid off – and as a bonus a great performance in the Europeans last weekend also means they are within touching distance of the Sevens World Cup.

England ended three points ahead of Ireland, but may not have been quite so happy. That this would have been a challenging season for England was only to be expected. Their Olympic strategy had been to take experienced players from the 15s World Cup winning team and train them for sevens. It so nearly paid off with 4th place in Rio, but it also left little of a legacy beyond Rio as most players returned to fifteens and World Cup preparations.

So, this was going to be the year that England finally started building a near-specialist sevens squad to match that of their rivals – a welcome development. In addition, a target of qualifying for the Seven World Cup from the World Series was set, and a semi-final in Dubai seemed to have them well on their way.

After that things did not quite got to plan. For reasons that are hard to put a finger on, England struggled more with their 15s players missing, especially over the Six Nations, than their main European rivals, Ireland and France. They missed a quarter-final for the first time ever in Sydney, then did so again in Las Vegas. Kitakyushu put them back in the running again, only four points behind France, but again there was disappointment in Langford (including a first ever loss to Ireland) at which point it appears to have been decided that Clermont would be used as a development opportunity. Even so – regardless of how young and inexperienced the selection was – last place is probably not what was expected. And Sevens World Cup qualification still has to be achieved.

Finally there was the battle to avoid relegation, a battle that was to feature just Brazil and Spain from the start.

Throughout the season Spain just held the advantage, finishing just ahead of Brazil in every tournament apart from Sydney. Remarkably the two teams only came face to face in Clermont after relegation was decided, Spain winning.

Both teams have simply struggled to keep up with the rest of the teams in the Series – a combination, perhaps, of funding, relatively small player pools and playing what is domestically a minority sport. Only six points separated them in the end with neither making a quarter-final all year. Though Brazil in the end were the ones to fall, Spain perhaps only have a temporary reprieve unless they can find some way to catch up with the rest of the series – and very quickly.

Finally, five Guest teams took part – South Africa, Japan, Papua New Guinea, Netherlands and Argentina. As if to show how far the World Series has now grown from the rest of the game their combined total of 31 games featured just two wins – South Africa’s 26-7 win over the USA on the first day of the series, and Japan’s 25-7 win over England on the last.

The good news is that World Rugby seem to have plans to stop the WSWS being a 10 or 11 team monopoly. Executive Committee member Bob Latham dropped a big hint about a possible second tier tournament, an event in China last month:

"There’s things that we’ve talked about”, he said. "The one that makes the most sense is women’s sevens. "We want more tournaments for the women’s sevens players.  We want to be doing some sevens events on a more regional scale as well, not just on the World Sevens circuit. We need competitive sevens matches for teams that aren’t the top 16 men’s teams or the top 12 women’s teams in the world. I don’t want to get too specific but there’s probably three things on the table that we’re looking at."

As the top ten teams in the world start to disappear over the horizon, it cannot come too soon.