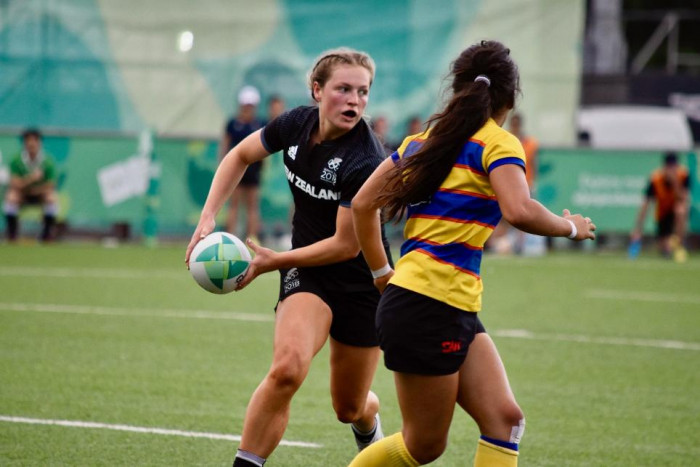 New Zealand are Youth Olympic champions, their newly-formed (only this year) junior squad - playing only its 11th ever game - completed an unbeaten tournament to win gold.

What was also impressive was the crowds the tournament drew in a country that supposedly has little interesting in women's rugby. The sevens competition attracted a full house on on all three days with additional areas having to be opened to accommodate the crowd, with the women's games attracting as big crowds as the men's.

From the opening game on day one, under a blazing spring sun, New Zealand confirmed their desire to succeed Australia at Youth Olympic champions by winning their two games comfortably and putting on a show of raw talent that can only bring an idea of what the future looks like for women’s rugby. New Zealand were too hot for both Tunisia and Colombia, 10 of their 12 players scoring their 15 tries on the day. Iritana Hohaia scored a brace in the opening game – a 53-0 defeat of Tunisia – and managed a third for the day in the 38-5 victory over Colombia.

That try scored by Colombia's efficient play-maker Laura Mejía from a quickly-taken penalty earned one of the biggest cheers of the day was just reward for their persistence.

France also recorded impressive wins over Colombia (47-0) and Kazakhstan (45-0) to top the table on points difference. Their best player was Alycia Christiaens, who not only created a lot of opportunities for her team-mates, but scored 31 points in a busy afternoon. A hat-trick against Kazakhstan came after an earlier brace against the South Americans, instantly marking her out as a player of the future.

Canada were the other unbeaten team, although they had to battle hard in their opening match against a Kazakhstan side who scored a hat-trick from strong 17-year-old Vlada Odnoletok in the 24-15 defeat. It took the Sandro Fiorino-coached team time to settle their Olympic nerves, but they were strong and efficient against Tunisia, scoring six tries – three of them by Kendra Cousineau – in the 50-7 win. They continue to be a medal contender, but their crunch game for the second day will be against New Zealand.

Elsewhere, Tunisia were very well led by their captain Halima Ben Charrada, who ensured her side never gave in despite the tries mounting up against them. She was key in her team’s only try of the day, scored by Arbi Chaima, three minutes from time against Canada.

On the secod day New Zealand chalked up wins against both their prospective opponents to book a place in the final. Enjoying the sunny conditions, the antipodeans bounced back from the concession of an early score in both games to beat France 26-12 and Canada 20-5, Montessa Tairakena scoring twice in each match. With the scores tied at 10-10, Canada had sensed the chance of an upset but Tairakena delivered for her team in the 10th minute to change the course of the match. the day ended with local favourites Colombia recording their first win against Kazakhstan, leaving them needing to beat Tunisia for a place in the bronze medal game.

France won that vital final pool game comfortably - 33-19 - against Canada, winning a deserved place in the final. Canada went on to win bronze - but Colombia pushed them hard, suggesting that when these players graduate to adult rugby maybe their might threaten Brazil's dominance of South America.

The final was a repeat of the World Cup final, and in the end had the same result. But the French pushed the junior ferns closer than ever before, going down by only 15-12.  It was a tense encounter with Montessa Tairakena and Iritana Hohaia giving the New Zealand team a 10-0 lead before France scored on the stroke of halftime for a 10-7 scoreline at the break. The French took the lead in the second spell 12-10, setting up a grandstand finish, with Mahina Paul scoring for New Zealand to seal the 15-12 victory.

New Zealand Rugby CEO Steve Tew congratulated the team on their result. “This is the first time we have had a sevens team at the Youth Olympic Games and for them to claim the gold medal is an outstanding result. The team only spent a week together before taking the field so winning gold is testament to the hard work the players and team management has put in. It shows the future of women’s sevens is in good hands.”