Some of the best - and most unexpected - news in recent weeks was not just the revival of the XVs game in Africa, but the reappearence of test game in southern Africa. Clement Sinkamba, President of the Zambian Rugby Union has written to us about the women's game in his country and his hopes for the future. 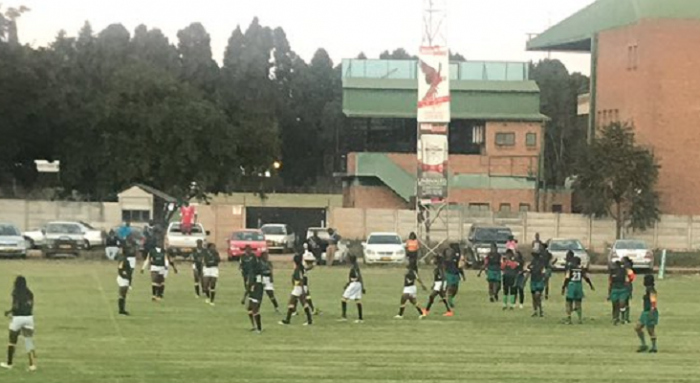 My name is Clement Sinkamba, President of the Zambian Rugby Union and I just wanted to share where we are with women's rugby in  Zambia..

History of Zambia Women Rugby dates as far back as 2006 when we started a women's section at one of the clubs in Lusaka under the umbrella of an Airforce-sponsored outfit, Red Arrows Rugby Club.The same year another section of women were introduced at Eagles Rugby Club, a club sponsored by the Zambia National Service. Because of numbers and fearing injuries the two clubs concentrated on 7s rugby training for girls.

Come 2007 ,the women's team was sent to participate in the Women's Tournament in Uganda and won for themselves a Plate which was not bad for first time participants. In 2008 the women participated in the locally organized Zambia International 7s Tournament which had two women teams entered - Zambia and Zimbabwe - and Zambia won the women category. In 2009, Zambia visited Zimbabwe and beat Zimbabwe at their home turf in the 7s.

Unfortunately the period 2010 to 2014 saw women's rugby slump due to lack of sponsorship and the tide changed into Zimbabwe's favour.

However in 2015 the structures were revisited with the encouragement of Africa Rugby and the GIR [Get into Rugby] programme in place, and more rugby started being played in schools and communities.A third women's team was introduced on the Copperbelt province and competitive rugby in form of 7s tournaments played amongst the three women teams began. In the same year Women's 7s Team participated in the Rio Olympic Qualifier in Johannesburg South Africa, but did not make a grade.

In 2017 ,we have had a re-think on how to progress women rugby .The Mines, Mopani Mines to be precise, has taken up sponsorship of  the  only women's team on the Copper belt at Mufulira Rugby Club.So with three very well sponsored clubs Women's Rugby is headed for glory again. The defence forces are also keen to introduce rugby in their structures under the umbrella of confederation of military sports, "CISM".

With Zimbabwe Rugby inviting our women's rugby to try 15s on the weekend of 3rd June 2017, we did not hesitate and quickly put the girls through the paces of the 15s format and run them through the rules and within a week they were okayed for their first ever 15s Match. We knew with just a week's training there was no way we were going to beat Zimbabwe, who had made so much strides in both the 7s and 15s since 2010. but then our philosophy of "there has to be a first time to start" paid off.

With the Match of 3rd June, which our girls lost 39-0, we think is the beginning of rebuilding our women's rugby prrogramme. We are not looking back but forward. If we can get the structures right and support from the schools and sponsors we shall definitely in no time become a force to reckon with.

What we need are further invitations to expose our girls, that way they will learn fast from what they see from their friends, the referees and different coaches.Passion should be the driving factor that should go with it.

Lastly ,it's the encouragement that comes from journalists, people like you who build, expose and write stories about us that inspire us.Inspite of our underperformance in this particular test matches or that tournament you still find positive things to write about us that inspire and guide us and give us pointers of what we ought to try out to reach the levels of our friends.We value you for exposing us. Letting people know that we also exist and that we have ambitions to get were other teams are. They need to know that to get to compete they need us as competitors otherwise who would they be competing against.

Equally sponsors should see us as an investment vehicle. We are the first line to selling their products. It is a mutual relationship one cannot do without the other. It's for this reason that we take time to thank the  sponsors that have seen value in us.

I also wish to thank Zimbabwe Rugby Union for their encouragement and support in so many ways. Next year they get to visit us under a reciprocal arrangement and we have plans to invite Botswana once we are satisfied with the training of our girls.