Despite their win over England, French head coach Christian Gallonier bemoaned a lack of playing depth at the top level in his country over the weekend. 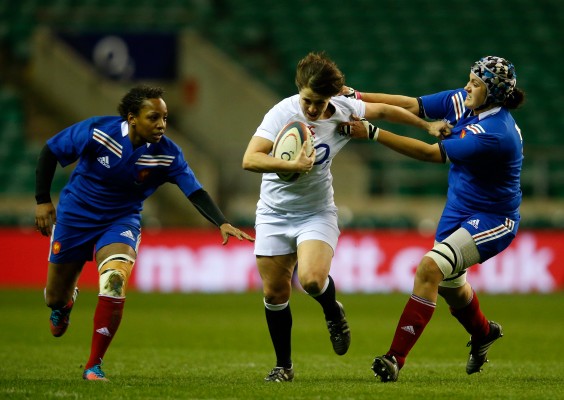 Saturday was one of the greatest evenings for French women’s rugby for at least a decade. However, while the players celebrated, the management team were looking ahead, and at the challenges they face barely a year before a home World Cup.

For young players such as Jade Le Pesq it was an almost indescribable experience. “I’ve only been here once before - to watch the All Blacks. To play here, never mind win, is incredible”.

But elsewhere more experienced heads were being more realistic about the result. As the champagne corks flew and the players sang on the field, team coach Christian Gallonier reflected on the occasion when we caught up with him after the game.

“I am delighted and relieved and very happy. I am enjoying the occasion – to win at Twickenham for France is a great thing – and it is very difficult. But I know England – where is Emily Scarratt? Where is Micheala Staniford? It is very different when they play and we know that!"

Gallonier's charges were in total control throughout the game, apart from tailing off near the end when England brought their tally to 20 points, but by then the game was won. He believes that France could suffer from a lack of talent at the top level of the game in the coming years.

“England have so many good players but looking at our squad this year, we don't have many at this level beyond it. This is pretty much all we have. If everyone is fit I have maybe 30 players who can play at this level – at an international standard – to choose between.”

Gallonier says this is down to the current structure of the French league system.

“In England a lot of the top clubs in the Premiership have two or three teams, so could have 40 or 50 players competing for places in the first team. In France we have 10 clubs playing in a very competitive league, but the work done by players within the clubs is not nearly as high a standard as we need. Very often there is no pressure. Each club has maybe 25-30 players competing for first team places and for the best players it is too easy for them to get into their teams. Players say “I’m okay, I will get in the team, I do not have to train too hard - it’s easy for us.”

Gallonier also pointed out that after club level there was nothing in between to prepare the players for international level and though there are “concentration” weekends for the top 30-40 players, normally around the start of the season, there is little else to allow players on the fringe of national squad to make their mark, or press for selection.

While that situation isn't unusual in international rugby, nations like Ireland and England do have regional competitions to help bridge that gap, and while Gallonier would love to change things in France, there is little room in the calendar. The French women’s club season is already the longest in any leading rugby nations – running from early September to well into June, sometimes July. And clubs are important in France – they have power. Several of the French team at Twickenham – including Le Pesq and Sandrine Agricole - had been playing for their clubs last weekend, a circumstance that prevented the French squad coming together over the weekend.

But for now Gallonier was enjoying the moment – and already looking ahead to Ireland in two weeks.

"This clearly now is a very big match. Last year in Pau there was only one point between us, the year before the same in Ireland. We are so very closely matched, so very similar as teams so it's going to be a tough challenge."

France are hopeful that play maker  Aurelie Bailon could be back for that game. “She has an X-ray on Monday and she is a key player for this team. She's a good kicker, a strong defender, she knows how the team is organised - and at number 10 she is more exprienced than Sandrine or Jessy. Jessy is very talented and can play 10 or 15 – but I think she is too young to take on the responsibility of fly half at the moment. She will continue to improve in future, and could have an important role in the World Cup."

Gallonier also said that Sevens will be a focus in the coming weeks.

“Sevens is the priority this season, and as Hong Kong gets closer I will have to conserve the Sevens players in the squad - like Ladagnous, Billes, Mayons. We will have to manage that."

"I am delighted and relieved and very happy. I am enjoying the occasion – to win at Twickenham for France is a great thing – and it is very difficult"
Christian Gallonier