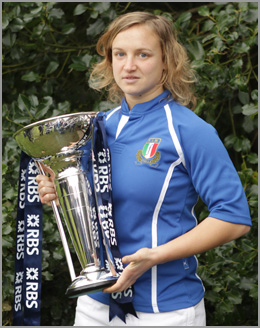 Italy head coaches Andrea Di Giandomenico and Luca Bot will take their side to Ireland next week searching for their first victory over the Irish in the Womens 6 Nations.

Since joining the 6 Nations competition in 2007 in the place of Spain, the Italians have managed just one victory over Scotland but they pushed Ireland close last year and will be hopeful of breaking their duck in Ashbourne.

Italy have already named their 22 player squad to travel to Ireland for the opening 6 Nations match and the squad will gather in Rome at the Olympic Training Centre next Tuesday before flying to Dublin ahead of the Friday night fixture.

There are two new faces in the squad with Valentina Virgili and Chiara Buongiorno making their debuts in the national shirt, while there are first time 6 Nations call ups for Lucia Gai (3 caps), Alice Trevisan (1 cap) and Germana Raponi (3 caps) who debuted at the European Championships last summer.

Italy skipper Paola Zangirolami said that the aim initially for her team is to come away from the competition with at least one victory.

The only thing that has changed for the squad this year is that we have some new trainers and some new young squad members who have come through. We played at the European Championships after the 6 Nations last year which game us some tough games which we hope will help us this year.

Despite finishing bottom of the points table last year, Italy did push a number of teams hard so there is much evidence to suggest they could do better this year. Against Ireland they were leading for a short time in the second half before the Irish pulled away late in the game. Against Scotland they lost by just a penalty kick and against France they went down by just four points, so the opener in Ireland is an opportunity.

England are always the toughest team for us to play against and the visions of winning against them are not the strongest, Zangirolami said.

But in terms of the other nations we are confident we can do well. It was close in a few games for us last year, Scotland and France for example and we are definitely hopeful of the home game against Scotland that we could target a win. We have some new players who will be out there this year and we want to improve.

The 6 Nations will be the highlight of the year for Italy who failed to qualify for the World Cup last season though they are due to play at FIRAs European Trophy over the summer.

Zangirolami said that missing out on the World Cup is a blow.

It is disappointing for all of us yes not to be there, but it was difficult for us to get a squad together for the Euros when we needed to qualify last summer because the girls find it hard to get off work and we were missing some key players at that competition.

Womens rugby in Italy is getting bigger though especially since we have been playing in the 6 Nations and the number of girls playing has increased especially in the Northern regions.