France's Marjorie Mayans recently decided to end her Olympic dream and concentrate instead on fifteens for 2021. She has been speaking about her decision. 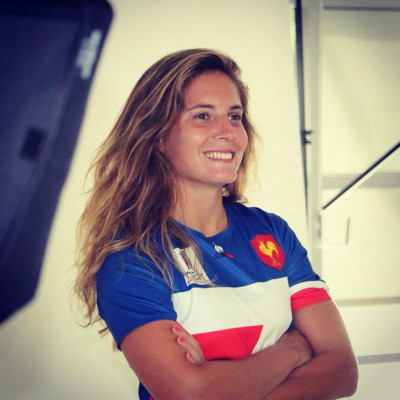 Next summer the scheduling challenges brought about by the current pandemic reach a peak. The Olympic Games are due to take place from July 23 to August 8 in Tokyo, with sevens currently scheduled to take place at the end of the fortnight. Then barely six weeks later the World Cup is due to take place in New Zealand, from September 18 to October 16.

Although some nations, such as England, have effectively created two separate sevens and fifteens squads, for the most nations, with significantly smaller player bases, this has not been possible. The remain competitive their leading players have to switch from one format to another.

Even some of the largest rugby nations are not immune from the problem. Twelve of France’s 2017 World Cup squad were also in the sevens squad, almost half of the whole group.

When the Olympics and the World Cup were separated by over year these players would have planned to take part in both major events, as they did in 2016-17.

The two events are still over a year away, but players are already having to make decisions. France’s Marjorie Mayans is one of them and has announced that for her the choice will be fifteens.

“I planned to focus on the Olympic project with the 7s and then switch to the fifteens, but the postponement of the Olympics changed everything.

"For a long time I have balanced 7s and the XV and I have really enjoyed doing that, but I thought that if I wanted to have a chance to be successful next season I had to make a choice. I think it would have been overambitious to want to run for both goals simultaneously. I need to focus, and so I chose the fifteens.

“I had already decided to stop the sevens at the end of the 2020/21 season. It is very hard in terms of rhythm of life, the physical qualities and the physical demands are very high. Sevens rugby is evolving. There are a lot of young people who have arrived, who are performing well but who may not have been ready this year. I think in a year they will be and I might have nothing more to contribute to the team. So, I prefer to return to fifteens, and the club life that I miss.

“I am not going to do another 15 years of rugby so I want to rediscover my first love, fifteens, my club who I have somewhat abandoned in recent years.

France is not yet qualified for the Olympics so did this weigh in the balance?

“I hadn't even thought about it. Nothing is played but we are one of the 4 best nations in the world so apart from a big error on the course I dare to hope that France will be at the Olympic Games.

“The French team will be at the Tokyo Olympics.”

Is it possible to participate in both events? Many other players may face the same choice as Marjorie, but she is sure that for some players could play in both.

“I think it is generally possible to do both but for me it would not have been reasonable to try both. I am sure others could do it! The two events are close together, but there is time between the two to prepare.

“I think that as has already been done, the fifteens and the sevens will work together and players will spend the season moving between sevens to fifteens.

“For several years I was part of the Six Nations then I went into a tournament with the 7s.

“With the Olympic Games in July / August and the World Cup in September/October it leaves a window large enough for players to prepare exclusively for the XV after the Games finish.

“Sevens and fifteens contribute to each other and that sevens is a great preparation for then fifteens. Of course there are unique specifics in fifteens and we must focus on them, but the players are tough enough and physically mature to quickly integrate things and switch from one format to another.

“In view of the players of sevens, their physical and rugby quality, it would be a great shame to if they deprived themselves of skills of fifteens. Season management and physical preparation will play an important role for these versatile players.”

“I planned to focus on the Olympic project with the 7s and then switch to the fifteens, but the postponement of the Olympics changed everything."