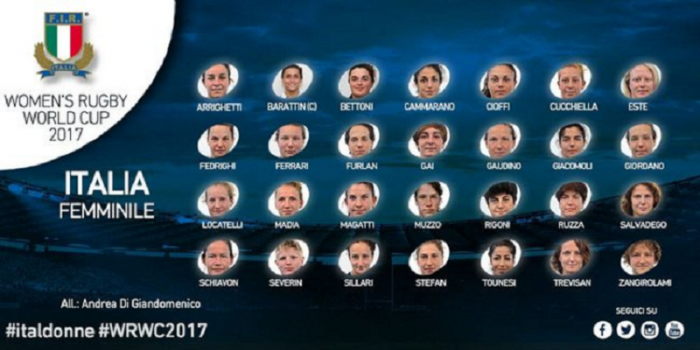 Italy return to the World Cup after a gap of 15 years – from before they joined the Six Nations – and for all but two of the squad this will be a new expierience.

Italy are one of the oldest rugby nations. They were the fourth country to take the field in 1985, playing in what was just the sixth-ever women’s test. They also took part in the first European Championship in 1988, which in 1991 evolved into the World Cup.

At that first World Cup, as this year in Dublin, Italy were pooled with England and Spain, but lost both games and were eventually defeated by Canada in the plate semi-finals.

In 1994 they were one of several teams who withdrew at the last moment, under pressure from their own union after the IRB refused to officially sanction the tournament, but returned in 1998 after the IRB finally supported the competition.

In Amsterdam that year they again missed out at the pool stage, eventually finishing 12th in the 16-team competition after wins over Germany and Russia, but losing to Scotland, Ireland and Wales.

In 2002 it was a similar story, with a win over Japan being balanced with defeats to England, Wales and Kazakhstan – and again 12th place out of 16.

Since then they were not invited in 2006, were beaten by Sweden and Spain in the 2010 qualifier, and then missed out to Samoa 2014 qualifier, despite beating the Pacific islanders 65-22.

There was therefore some real celebration last year when the Italians finally confirmed their place in this competition, based on their 2015 and 2016 Six Nations results.

However, after putting such an effort into qualifying (where they finished above Wales as well as Scotland) Italy, uniquely among the European qualifiers, have played no tests outside of the Six Nations – no Autumn internationals, no summer tours, no warm-up fixtures - and their 2017 Six Nations saw they lose all of their games, picking up their first wooden spoon since 2009.

This apparent lack of interest in the Italian women’s team from the Italian Federation resulted in such a build-up of confusion and frustration that it was even rumoured in Italy that they would not take part in the World Cup, which forced Cristina Tonna, head of women’s rugby at the FIR, to explain and defend FIR’s policy.

The lack of playing opportunities gives the 28-player squad an untried feel. Two uncapped players - lock Sara Tounesi and outside centre Aura Muzzo – while the two veterans of the 2002 campaign – fly-half Veronica Schiavon and former captain and No. 8 Silvia Gaudino – both return to the national squad despite having missed recent Six Nations campaigns.

Curoiusly Italy will have one of the lightest squads (only Spain and the Asian teams weigh less), but also the second tallest (only the USA are tallest).

"We are very pleased with the squad we have selected”, said coach Andrea Di Giandomenico. “All of the players who took part in our World Cup preparation camps have put in 100% showing great determination. We are excited at the thought of participating in the World Cup and are proud to represent the entire Italian women’s rugby community in a competition that any player would want to participate in."

"It's a huge honour to be able to represent Italy at the world cup, " added captain Sara Barattin. “Participating in this competition is the crowning pinnacle of the long journey undertaken with the team. Our preparation for this event began after defeating Scotland in the Six Nations in Bologna: and we are looking forward to getting back on the field. "

"Our pool will be tough and with some unfamiliar teams. England we know well, after playing them every year in the Six Nations. The USA and Spain, on the other hand, we have not played for some time: they have mainly concentrated on 7s recently but also have at fearsome XV teams."

If Italy can rediscover the form that saw them qualify for this World Cup then they might cause a surprise in their opening game with the United States, though the USA will certainly be the favourites. The match with England seems to have only one likely outcome, but the most fascinating game (possibly of the whole pool phase) must be their third game against Spain. Italy have only ever beaten Spain three times – once right at the start of Spain’s rugby history, and a couple more recently against a Spanish team shorn of their sevens players. They last met at full-strength in 2013, when Spain won easily 38-7, but much has changed since. It is a game that will be totally unpredictable, and - considering the history of the two teams - will have a great deal more riding on its outcome than World Cup points.