The recent appearance of international XVs rugby in southern Africa on the calendar has been one of the most positive developments in world rugby. Much of this has centred on Zimbabwe. 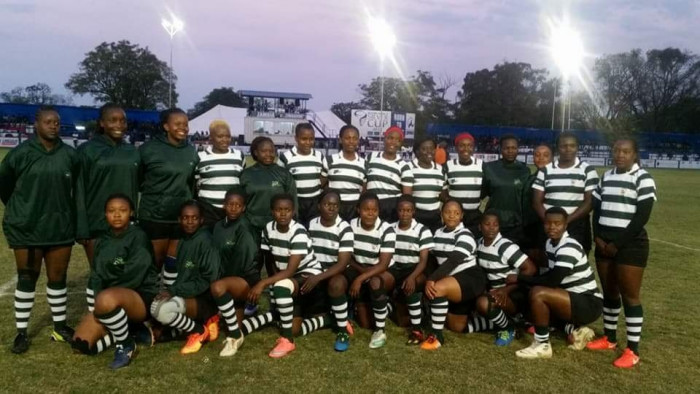 We recently looked at concerns about women’s rugby in South Africa, but there are more positive developments in the region. Neighbours Zimbabwe in particular have been very active, organizing internationals with neighbouring countries and aiming to represent Africa at the next World Cup.

We spoke to Clareser Muhonde, the Vice Chairperson for Women’s Rugby in Zimbabwe, about how the game is developing in the country.

SQ: Can you tell us about your background and role with in the Zimbabwe Rugby Union?

CM: My role involves promoting and developing women’s rugby. I joined rugby in 2013 for fun and keeping healthy. I played club rugby for only two years and decided to take up administration duties and sports administration courses then got into the leadership position.

SQ: How long has women’s rugby been played in Zimbabwe?

CM: Women’s rugby has been played since 1999. When rugby started, it was only for senior women but, thanks to the Government, rugby is now part of the school curricula. Most women now start playing rugby at school age even when schools do not have girls’ rugby, only a small percentage started playing afterwards. I am unusual as I started playing rugby when I was already working.

There are now about 15 clubs in different provinces – ten in Harare, three in Bulawayo and two in Mutare. We are making efforts to revive the domestic league and are seeking to secure sponsorship but presently there is no national league running. Most clubs play both 15s and 7s, with the exception of just two who only play 7s.

SQ: Are there any barriers to the development of the women’s game?

CM: There are a number of social barriers to women playing rugby.

The costs associated with transportation to training and competition and buying personal training gear is a major constraint. In addition in the African culture girls are expected to put doing household chores, child minding and caretaking at home over sport. We hear that “naturally women don’t act this way” and most parents restrict their daughters from an involvement with “masculine” sports. There is also a problem with body image - some girls shun playing rugby because they do not want to “look like men”.

There is not much support available to help with the economic constraints, but we strive to integrate with men’s clubs since currently women cannot stand alone due to financial limitations.

SQ: How big is your national player base?

CM: There is a large base of junior players in Zimbabwe for national teams. Players for the junior national team players are drawn and selected during school league and festivals.

But for senior teams the base is quite small compared to juniors because most players are ‘lost’ soon after high school. As a result, there is a huge gap between junior and senior teams. Only a handful of players are retained for senior rugby, and there is no program for U20s in place. This tends to mean that the same players are selected for both 15s and 7s.

SQ: What have been the factors behind recent developments?

CM: Hard work, determination and commitment have contributed very much to recent activeness.

SQ: Who are your leading players?

CM: We have strong and good players and some of the leading players are Constance Ngwende, Precious Marange, Chiwoniso Mabika and Lissy Wasarirevu. Given enough resources for the women’s training, we will have an unstoppable team.

At the moment players based outside Zimbabwe have to travel at their own cost and if they are in the country they can join in with preparations for competitions. We currently have one player in Cape Town and three in Botswana.

SQ: What are your ambitions for the future?

CM: If we manage to secure enough funding and sponsorship we would want to start competing in major tournaments as early as 2019.

We are putting together a plan for the 2021 Women 15s World Cup qualification, and hopefully we will succeed. It will be a milestone for Zimbabwe women rugby and we are sure that we will make it once we get on the rails. In 5-10 years’ time, Zimbabwe could be competing at the World Series and all World Cup competitions.

To qualify for the World Series and be successful in other major competitions all we need is enough funding and support, and sustained participation in regional competitions. There is great potential to grow women’s rugby more than it is – the talent is in abundance. It might take us at least 5 years to build on that but with enough funding we can do it. Then we will be ready.

There is potential to grow Women’s Rugby to greater heights as there is lots of talent available. There is need to retain the large number of girls coming out of the vibrant schools system and sponsorship and funding is needed to help bridge the gap between schools and senior women’s programme. We need to start having age tournaments just like men do [U18, U19, U20, U21] so that the girls will be prepared to play senior women.

Funding would enable us to have more training camping camps – perhaps even a national academy for nurturing national team players – would improve player motivation, and also allow us to development officials - both technical and administrative. And sustainable regional competitions to develop the game across the region.

With all these plans in place, and funds readily available, five years would be enough.

In 5-10 years’ time, Zimbabwe could be competing at the World Series and all World Cup competitions.