On 21 January, the German XVs team played their second fixture since the reintroduction of the team last year in August. Their opponents were the British Army Rugby Union – a team that regularly plays against the English U20 as well as the national teams, and includes players who play for the top teams of the English Premiership. A team which was considered clear favourite in this match. But the result was only a 29-25 win for the "favourites". 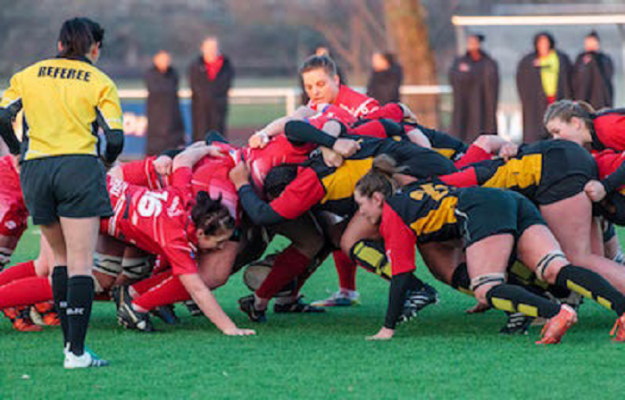 The power of the opposition was demonstrated in the opening minutes. The Army kicked off and the German XV put together some promising phases, but soon there was a turnover in favour of the Army. Quick hands in the backline resulted in a try for Carrie Roberts, which she converted to put the visitors 7-0 ahead.

Almost exactly the same thing happened from the restart. Good forward phases of the Germans, then again, the turnover. However, this time the Army backs were kept out. The German pack won the ball back and moved it out to the backs. Alysha Stone tore down the right wing and crossed the line for the first five points for Germany! Hollstein did not succeed in the conversion. 5:7

In the following minutes, it became clear that this was not a stroke of luck. Wing Steffi Gruber found a gap and made a 40m sprint down the right wing, only to be stopped on the Army 22. The ball was recycled and again found its way to Alysha Stone on the outside, who added another five points to the German account. The conversion was not made, but shortly afterwards Hollstein added a penalty from some 30m to give Germany a 13-7 lead.

The Army dominated most of the possession in the rest of the half, taking full advantage of German ill-discipline at the breakdown, and added two more tries. At halftime, the Army lead 19-13.

The start of the second half could not have been better for the home team: Leonie Hollstein scored from the restart before adding the conversion to put Germany back into the lead 20-19.

In the second half, the German team proved much better at keeping the ball over several phases, but steadfast defence now became their main task. And even though they could not match the power of the Army pack, the German tackled magnificently to attempt keep the Army out, but in the end the pressure told and the Army slipped back into the lead, 24-20.

Another German try followed. Dana Kleine-Grefe, who had come on for captain Ninja Duri, recovered an Army clearance and raced forward to touch down in the left corner flag. The conversion did not succeed. 25-24 to Germany

Germany was largely able to keep the Army out with their impressive defensive work but with the clock running down the visitors found a gap in the German line taking the ball to the German five-metre line. After a series of attacking phases, an overlap was created on the left side of the field and the visitors were able take advantage and score. The game ended with a score of 29-25 for the British Army.

Despite the close defeat, coaches Alfred Jansen and Marcus Trick drew a positive conclusion: Germany can compete internationally! Trick was satisfied with the performance of the team despite the difficult conditions and is of the opinion that "the German team has bravely answered the question of its international competitiveness with this performance" and has also impressed with in the open game played by the fast back-line. It was noted that the game was lost, among other things, by over 20 penalties conceded by the German team.