Closing tries from Claire Molloy and Hannah Tyrrell, with the latter adding a crucial conversion, gave an Ireland Women's XV a 24-22 win over Japan in an uncapped international trial game at the UCD Bowl this evening 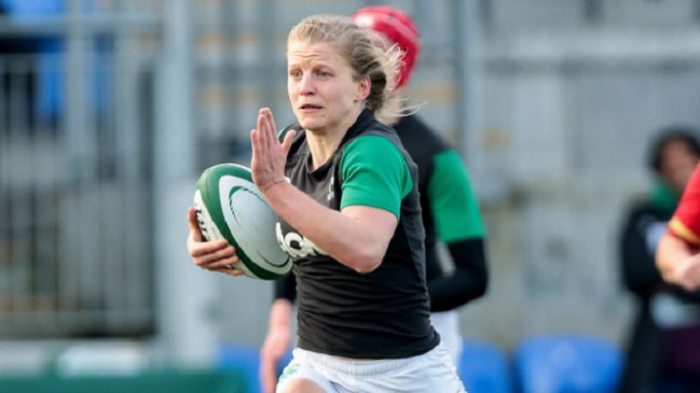 With 10 minutes remaining in the contest, Ireland trailed 22-12 against an impressive Japanese side, but thanks to the combined try-scoring efforts of Hannah Tyrrell and Claire Molloy, they came out on the right side of the result.

This was an enviable opportunity for both squads to get a run-out at the UCD Bowl, the venue for their Women's Rugby World Cup pool clash in two months' time, and there were the notable inclusions of Megan Williams in the centre and her Ireland Sevens team-mate Ashleigh Baxter in the back row.

With a second trial match against Japan to come next Wednesday at the Belfield venue, this warm-up series is a very worthwhile exercise for Tom Tierney and his fellow coaches as they test out some untried combinations and give players game-time in different positions.

Playing at UCD for the first time since last November's trio of Tests, Ireland were keen to hit the ground running and they broke the deadlock within four minutes of kick-off. A powerful maul on the left forced Japan backwards and hooker Cliodhna Moloney was in the right place to touch down for the opening try. Out-half Nora Stapleton missed the tricky conversion.

Promising approach work by UL Bohemians club-mates Louise Galvin and Eimear Considine maintained the pressure on the Japanese defence, and although the visitors were doing their best to contain Tierney's side, they fell further behind at the start of the second quarter.

Japan had worked hard to turn over possession from an attacking maul by Ireland, but after they fumbled the ball on their own try-line, Paula Fitzpatrick, who captained the girls in green during the recent Six Nations, dotted down for an opportunist score converted by Stapleton.

With Molloy was dominating the lineout from the back row, Japan were struggling to make an attacking impact. However, they managed to keep themselves within touching distance coming up to the interval. They finally made some headway inside the Irish 22 and a powerful drive by their pack on the right teed up a hard-earned try for prop Saki Minami.

Although Minori Yamamoto missed the conversion, Japan pounced for their second try on the stroke of half-time. A sweeping move across the Irish line was finished off in the left corner by winger Honoka Tsutsumi. The conversion attempt from Yamamoto came up short again, leaving Ireland with a 12-10 advantage.

With their tails now up, Japan moved into the ascendancy for the first time after the restart. A cross-field kick in the 50th minute sought out Noriko Taniguchi and the left winger succeeded in reaching the ball just ahead of the retreating Considine for the tourists' third unconverted try.

A number of substitutions had already been made to the Ireland line-up by this point, but despite having fresh legs on the pich, they could not halt the momentum that Japan had developed. Indeed, after she spotted space in behind the Irish defence in the 56th minute, full-back Mayu Shimizu powered over for another eye-catching five-pointer.

Yamamoto finally split the posts from her fourth effort off the tee, and this left Ireland facing an uphill task for the closing quarter of this lively game. Replacements Leah Lyons and Nikki Caughey were both halted just shy of the Japanese line, though, as Ireland began to build pressure inside the 22.

The hosts' persistence finally paid off for Ireland in the form of full-back Tyrrell's 72nd-minute try on the right, and although Caughey failed to add the extras, the score set up an exciting finale.

With several of the extended squad - as well as some members of their Sevens set-up - cheering them on, Tierney's charges were ready for one last push in this high-scoring affair. Considine was denied initially at the end of a strong carry, but after she received the ball from a quick set piece move, Molloy broke through for a magnificent try. Tyrrell kept her composure to slot the decisive conversion, swinging the result in Ireland's favour right at the death.