England finished their Autumn international campaign unbeaten after a comprehensive 60-3 10-try win over Italy in front of a sold out crowd in Bedford. 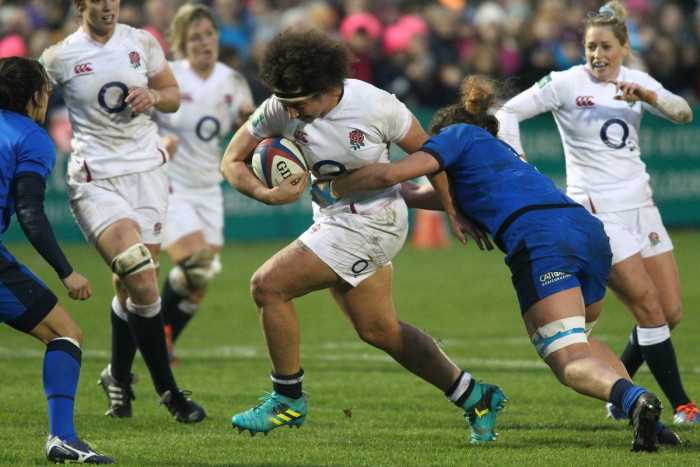 England were 22-3 at half time with tries from Vicky Fleetwood, Poppy Cleall, Heather Kerr and Abby Dow, while Italy's points came via a Michela Sillari penalty.

The second half was one way traffic and England added further tries from from Kerr, Emily Scarratt, Sarah Bern (2) and Rownita Marston to secure a straightforward win in terrible weather.

The win meant a 17th straight victory on home soil for England and ends their year on a real high after two recent wins against France - ending 2019 with 11 wins from 13 games.

There was little for Italy to take from the game, save the knowledge that England are likely to be far too good for most sides on this form and with their professional programme now in full swing.

Italy's resistance lasted less than six minutes, Fleetwood bundling over off the back of a driving maul - which would set the tone for the match.

Sillari had Italy's first points from the tee but England's power up front continued to do the damage and Cleall powered through to cross under the posts, which Scarratt converted.

Another driving maul from a lineout resulted in Kerr bundling over for a third England try and Dow had a fourth when diving over in the corner as Middleton's side showed great patience going through multiple phases before shifting the ball wide to the Wasps FC Ladies wing.

World player of the year Scarratt cut a fine line through the Italy midfield to cross under the posts for a fifth England try after the break and she converted her own score.

Italy lost Lucia Cammarano to the bin as their task was made that much harder and England made them pay, Kerr bundling over off the back of another lineout driving maul.

Italy were powerless to stop England’s driving maul, and Bern powered over for England’s seventh.

England were awarded a penalty try after scrum infringement from Italy as Middleton’s side crossed 50 points.

And moments later the power from the pack was in full evidence again as an England scrum on Italy’s 5m was shunted to their own tryline and Marston dotted down.

Italy lost Sara Tounesi to the bin in the final moments and Bern had a second try after collecting the ball off the top of a lineout and flying down the blindside to cross for a 10th England score.