Japan have won the Asian U17 title in Dubai – and with it a trip to the Montevideo Youth Olympics - but the two day event also saw international debuts, and the first signs of a possible new Asian power. 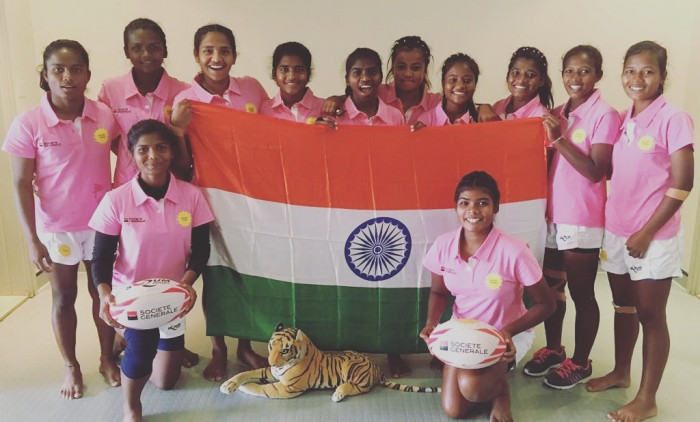 India made the headlines with a sensational win over Hong Kong to reach the semi-finals: a new Asian rugby powerhouse?

Next year’s Youth Olympics will feature rugby sevens for the second time, but instead of qualification based on the performance of adult teams, each of six regions is organising an U18 championship, with the winners qualifying for the Games.

Asia’s qualifier took place this week in Dubai. 12 teams took part (it was due to be 13, before Mongolia withdrew) – but unusually they were divided into four pools of three teams on Day One, before the usual play-offs on Day Two.

All of the region’s leading teams were present, with Japan, Kazakhstan, Hong Kong and China being give the top seedings in the four pools, but also included teams making their competitive debut.

This includes Laos, who were taking part in a youth tournament for the first time. Back in 2012, the Lao Rugby Federation (LRF) began piloting the “ChildFund Pass It Back”, using the Get Into Rugby curriculum, in 12 villages in northern Laos. more than 3,000 young players registered across eight districts of Laos – including every member of the national team in Dubai – and 56% of all players and coaches in Laos are now female.

“Pass It Back” has now spread to the Philippines  - Vietnam, whose women’s team will make their rugby debut in next year’s Bangkok 7s.

Laos were drawn with Japan and India on Day One – and had a tough time, losing 62-0 and 50-0 – but would do much better on the second day.

Also taking part were Iran, fresh from their recent tournament with Germany, who beat the UAE to reach the quarter-finals behind Kazakhstan. Hong Kong and Sri Lanka qualified from Pool C, and China and Thailand from Pool D.

The second day opened with a near surprise result with Thailand coming within two points of Kazakhstan, just going down 14-2. Japan and China swept into the semis at the expense of Sri Lanka (70-0) and Iran (48-0) before the… sensation! India beat Hong Kong 24-7 – almost certainly the best result by an Indian rugby team ever.

Japan and China proved that they were at a different level to the rest of the tournament in the semi-finals, beating Kazakhstan and India 48-0 and 43-0.

Before the final the bottom four teams met in a round-robin play-off – and Laos finished top, with three second-day wins out of three including a big 30-0 win over the Philippines, and a 10-5 win against Malaysia – both nations with far stronger rugby traditions.

And so to the final, where China lead 7-5 at halftime thanks to an early try from Weiyan Wang, Japan’s Rinka Matsuda replying midway through the half. In the second half Japan took the lead in the second minute through Sachiko Kato and then guaranteed their place in Montevideo with a third try from Moe Tsukui with a minute to go.

At the end of the day, therefore, Japan proved themselves Asia’s strongest rugby nation – but the real excitement was India. Could there now be a new team bidding for Asia’s place at the Olympics in 2021?