Decisive wins by Kenya and South Africa sets up a two-horse race for World Cup qualification. 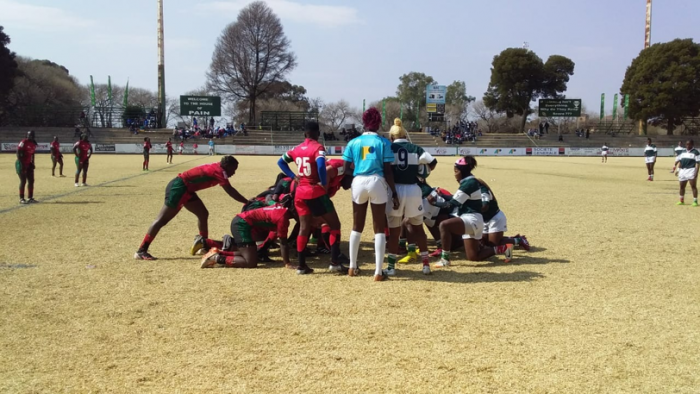 The Kenya Lionesses secured their first win in the 2021 Women’s Rugby World Cup Qualifiers after beating Madagscar 35-5 in the 2:00pm kick off match.

Madagascar drew first blood half way into the first half with the conversion drifting wide. Three minutes later, the Lionesses who seemed to take a bit too long to settle in this encounter leveled up the scores to 5 a piece as Celestine Masinde  crossed over the whitewash. Grace Adhiambo’s conversion was short.

While deep in the opponent’s 22, the Lionesses forwards ball carrying skills could be seen as they slowly made their way to the try line. Scrumhalf Irene Atieno sent the ball to the backs whose interplay resulted in a gap opening up and Janet Okello cutting through it to land her side’s second try. The conversion again drifting wide. Philadelphia Olando extended her Pride’s lead to 17-5 at the stroke of half time as she landed a center post try with Irene Atieno adding the extras.

The second half, the Lionesses added an extra 18 points through the Impala Saracens’ duo of Diana Awino and Christabel Lindo who landed a try each. The spectators were served with Janet Okello’s signature run and rounding of her defenders as she made her way to the in goal area. She played in Celestine Masinde who landed her brace and the last of the Lionesses tries, the conversion sailed wide. Christabel’s and Masinde’s second try sandwiched a Janet Owino’s penalty kick that was a result of Madagascar’s infringement.

In the second game of the day, South Africa swept to their biggest ever test match win with an 89-5 win over Uganda.

Lock Rights Mkhari scored the first two tries in the opening five minutes, Sinazo Mcatshulwa scores the third try in the 11th minute, Zintle Mpupha broke through for the point try in the 15th minute, and Rights Mkhari earnt her hat-trick in the 19th minute.

Bok captain Babalwa Latsha scored in the 21st minutes to take the score to 36-0, Ayanda Malinga took the score to 41-0 in the 26th minute, Zintle Mpupha added her second try in the 30th minute after a fantastic line break by Zenay Jordaan.

Things went from bad to worse for Uganda as in a few minutes they lost hooker Yvonne Najjuma through injury and then conceded a yellow card after 33 minutes, and South Africa took full advanatge with Yonela Ngxingolo and Eloise Webb scoring befor half-time, which came with the home team 62-0 ahead.

Webb added her second try soon after the break, but once Uganda were back to fifteen players the scoring slowed.

A Snenhlanhla Shozi try to the Springboks to 72-0 in the 56th minute, Sinazo Mcatshulwa added her second try soon after, and Webb completed her hat-trick in the 70th minute to take the score to 84-0.

But Uganda were not finished and a great break by Samiya Ayikoru put them on the board, but one more Springbok try ended the game with a 15-try 89-5 win.