The Black Ferns have been dealt a major blow ahead of their tour to England with the news that captain Melissa Ruscoe has been ruled our of the trip after suffering a concussion. 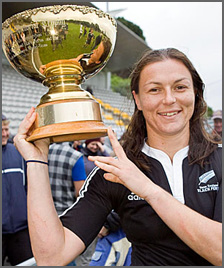 The New Zealand women's captain, Ruscoe (pictured) has not recovered from the injury sustained during the womens National Provincial semifinal against Hawkes Bay last month.

Coach Brian Evans said this was very disappointing for the blindside flanker.

Melissa has led this team well and opportunities like this are special in a Black Ferns career. However, her well-being is paramount and her focus is to get herself right for when the Black Ferns set out to defend their Womens Rugby World Cup title in 2010, said Evans.

She will join the Black Ferns squad when they assemble at the Millennium Institute in Auckland on 6 November before heading to England for the three-match tour on 9 November.

Last month Brian Evans named five uncapped players in his squad who will travel on the rare international tour as part of their build-up to the defence of their Women's Rugby World Cup crown in 2010.

Evans and assistant coach Grant Hansen named Auckland's Renee Wickcliffe, Canterbury's Amanda Murphy and Barbara Chittock, Wellington's Claire Rowat and Otago's Kelly Brazier in the line-up as the new faces in the squad, which featured 20 players who were part of the NPC final which saw Auckland defeat Canterbury 24-20.