China, playing in only their second international since 2012, won the Asia Rugby Women’s Division 1 title with a 68-0 victory over the Philippines. 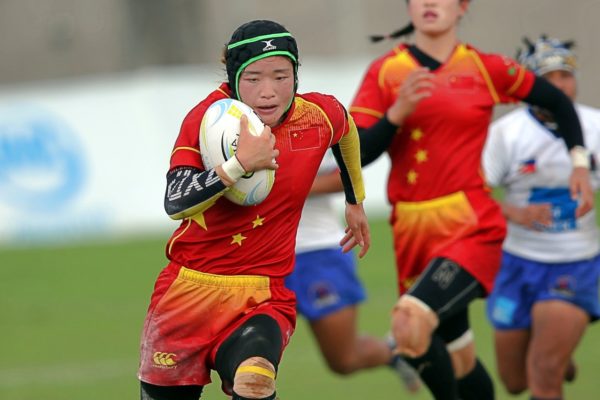 In the days before the lure of Olympic sevens gold, China were a rising force in Asian test rugby. Continental champions at their first attempt in 2006, and then beaten finalists in 2007, they looked like becoming a force to be reckoned with.

And then along came sevens, the best players switched to the shorter form. They failed to score at try in their last tournament in 2012 and had not played test rugby since.

But now they are back, beating Singapore, and now the Philippines in today’s Division 1 final, with ease. They will now face Kazakhstan for a spot in next year’s Asia Rugby Women’s Championship. The winner of that tournament will qualify for the Women’s Rugby World Cup 2021, and China will be buoyed by their performances in Manila.

In the final Chen Yuqian, who scored a hat-trick in their win over Singapore, opened the scoring for the eventual winners.

YuanYua Lu showing excellent speed and power for their second before Yan Zhou and Weiyan Wang added further tries as China took a healthy lead into the break.

China continued to add further scores in the second half as their bench impressed with replacement Zhaoxue Zhai crossing twice to ensure the impressive victory.

World Rugby Council Member and Philippines hooker Ada Milby was proud of her side despite the defeat.

“China were a really strong side, and I wish them well as the pathway to Women’s Rugby World Cup continues,” explained Milby.