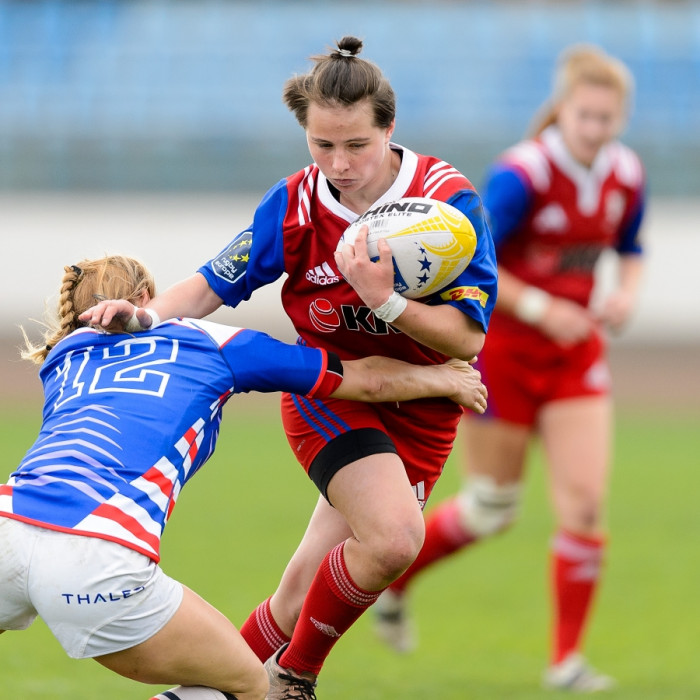 The match was curtain raiser to the men’s match, Czechia v Supa Barbarians (South Africa), and it was played on the main Czech rugby stadium, Markéta. The tickets were valid for both matches so we don’t have the exact number of visitors for the women’s game, but there were approximately 200 of viewers both Czech and French, cheering very loudly.

The day was sunny and warm, which is very unusual in Czechia in this part of year.

The match had two different halves. In the first one the Czechs, with a lot of uncapped players in the team, were visibly nervous and made lot of errors. The French team had upper hand and scored two tries.

In the second half the Czechs levelled the game and started to combine. Both teams scored three tries in this part of the game and the last one from the Czechs in the dying time was probably the best moment of the match. After the long pass from fly-half the backs combined few very short and fast passes and outnumbered the French defence.

The final pass went to the youngest player on the field, 17 years old Anežka Sládková, who was moved from centre to the fullback in the last quarter of the game. She had free space in front of her and run around the French players under the posts.

Anežka Sládková was named the best Czech player of the game, the best French player was named fly-half Margaux Auvinet.

The Czech captain Kateřina Nováková: “It was our first game after a year. In the first half we were not communicating enough. In the second half the coaches made few changes, we got the right tempo and our self-confidence grew-up a lot“.

The French captain Linda Kacem: ”The Czechs surprised us with very physical game, especially in the defence. It was really tight game.”

The game was really helpful for the women’s game in Czechia. The short news about the match and interview with captain appeared on the Czech nationwide TV for the first time.