Today is a historic day for Wasps FC as former England and Wasps ladies star, Sue Day has been appointed as Club President. 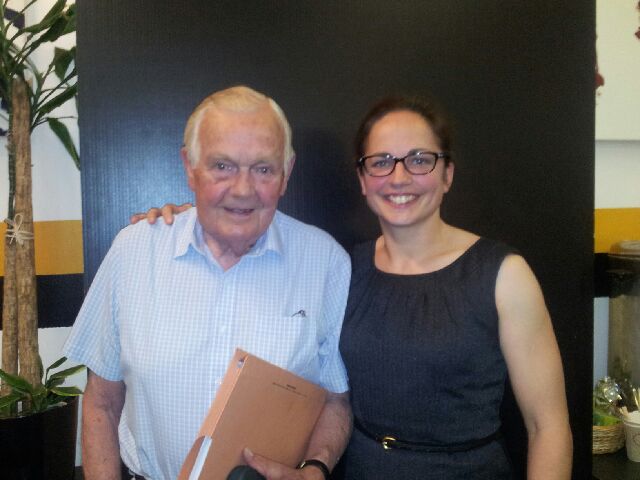 Day becomes the first female President at the Club, taking over from Dick Cargill (pictured), who has been involved at Wasps FC for over 60 years, serving as President for the last five.

Wasps FC was formed in 1867 and currently caters for rugby for players aged 5 and up. The Club has over 1,000 registered players and 10 Minis teams, ten youth teams, three senior men’s sides and two ladies teams.

The Club is the amateur arm of London Wasps – the professional team which uses Wasps FC’s training base in Acton, which is home to 23 acres of playing fields.

Day takes over as one of the leading figures in both Wasps and English women’s rugby in recent years. A frequent captain of Wasps in her playing days, she led the side to a Premiership title in 2003 and a League and Cup double in 2005. She has held various administrative roles with Wasps ladies over the years as well as coaching positions.

As an England player, Day has an enviable playing CV having won 59 caps and scored 61 tries for her country. She was part of numerous Grand Slam winning England sides – including leading the team as captain to a Six Nations clean sweep in 2007, and she’s played in three World Cups. She also captained England at the 2009 Women’s Rugby World Cup Sevens.

She said: “It is a huge honour to become President of Wasps FC. I have been a Wasp for over 16 years since I first arrived in London. I have black and gold blood running through my veins and so it is a very proud moment for me. Of course I am also proud to be the first female president of Wasps FC but in all honesty that side of it has not been an issue at all which tells you a lot, I think, about how inclusive, friendly and generally wonderful the Wasps Club is! Over the years that I have been at Wasps we have faced all sorts of challenges, and were even homeless for a while when the old Sudbury ground was sold, but we have always come through those challenges by pulling together as a club and working hard for one another.”

“We now have a stable base and strong men's, women's and junior sections and are really well-placed to build for the future and make sure that Wasps FC remains a significant force in the rugby world. I have taken on the role quite simply because I love Wasps and I want to do my bit to achieve that."

Day will combine her role as President along with her day job at KPMG where she is an Associate Director.

Outgoing President Dick Cargill said: “I am thrilled, delighted and proud to be making way for one of our most distinguished recent players. Sue had a glittering playing career and is the perfect choice to make history as our first ever female President.”

“She is highly respected throughout the game, and I have no doubt that she will be as successful in her new role as she was as a player. The immediate future of our great club could not be in better hands, and I wish her all the best.”

For more on Wasps FC go to www.pitchero.com/clubs/waspsfootballclub