England were far too strong for Wales in front of an excellent and record crowd in Twickenham, with their familiar brand of power rugby up front just proving too much for the visitors. 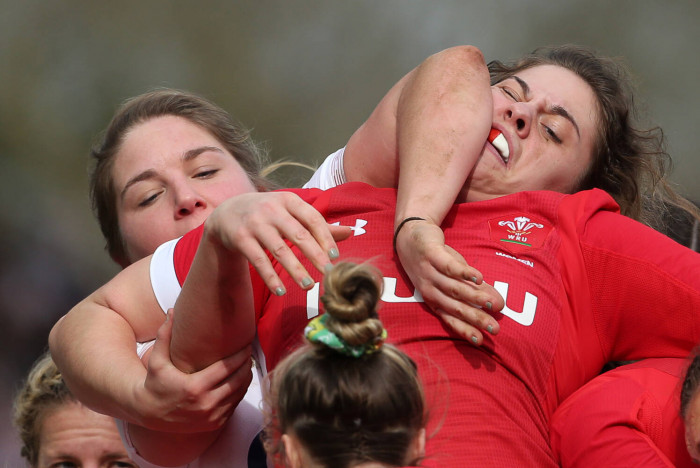 Wales can take some pride in the performance of their scrum, which had England under pressure throughout, and they grappled hard at the breakdown, but they were never able to get any sort of foothold in a game where England's tight five in particular dominated.

A hatrick from Poppy Cleall and a handful of tries for her front five colleagues - including Zoe Aldcroft, Amy Cokyane and Hannah Botterman - followed in a match which hardly needed England's backs to get involved.  Vicky Fleetwood too was brilliant around the park, and her transiton from world-class hooker to world-class flanker is surely complete.

Wales started well with a brilliant scrum to shove England off their own ball but that was as good as it got for the opening ten minutes as England's relentless attack had the visitors under pressure deep in their own half.

Lydia Thompson had a chance down the right wing, but Wales managed to bundle her into touch, but when Poppy Cleall came on the charge minutes later there was no answer and England went 7-0 up.

It was Cleall again who crashed over minutes later to double the advantage as England's ominous dominance continued.

But Wales battled, and through their excellent scrum and through Alisha Butchers and Bethan Lewis and their hard work on the ground, they just about hung on to stay in the game.

But a lapse in defence was all England needed, and a brilliant break from Katy Daley-Mclean through the middle of the field saw her use her pace and footwork to power over in a superb finish.

Wales then lost Lewis to injury and just before the break England were over again - this time Vicky Fleetwood with the score off England's well organised driving maul to take a 26-0 lead into the break.

Teeneger Mia Venner came off the bench in the second half to make her debut and England were back into a familiar rhythm quickly with Harriet Millar-Mills racing over for an early score.

Cleall then bagged her third with a devastating burst from the 22. England then emptied their bench and the power of Sarah Bern and Hannah Botterman hardly made life any easier.

Sarah Beckett and Botterman combined beautifully in one attack only for Kayleigh Powell, who had a tough day at fullback, to just about hang on and slow things up.

But Bern came again and this time Wales couldn't hold them out with Cleall offloading at close range to Amy Cokayne.

Wales then did get a chance - this time Venner showed her inexperience, taking too long to clear her lines and Wales charged her down on their own try line. When Natasha Hunt shoved Kerin Lake off the ball in an effort to dot down first, the England scrum-half was carded and Wales were given a penalty try.

Order was restored when Zoe Aldcroft made the most of a poor Welsh effort to get off their line at the other end minutes later and Botterman was next to power over under the posts  - making it six tries on the day for England's tight 5.

Sarah Mckenna became just the second back on the day to touch down when she rounded things off on the 79th minute with a try to round things off.